How clubs performed throughout the 2020-21 Regular Season

Take a look at the stats of the eFootball.Pro IQONIQ clubs as the top six head into the Knockout Stage 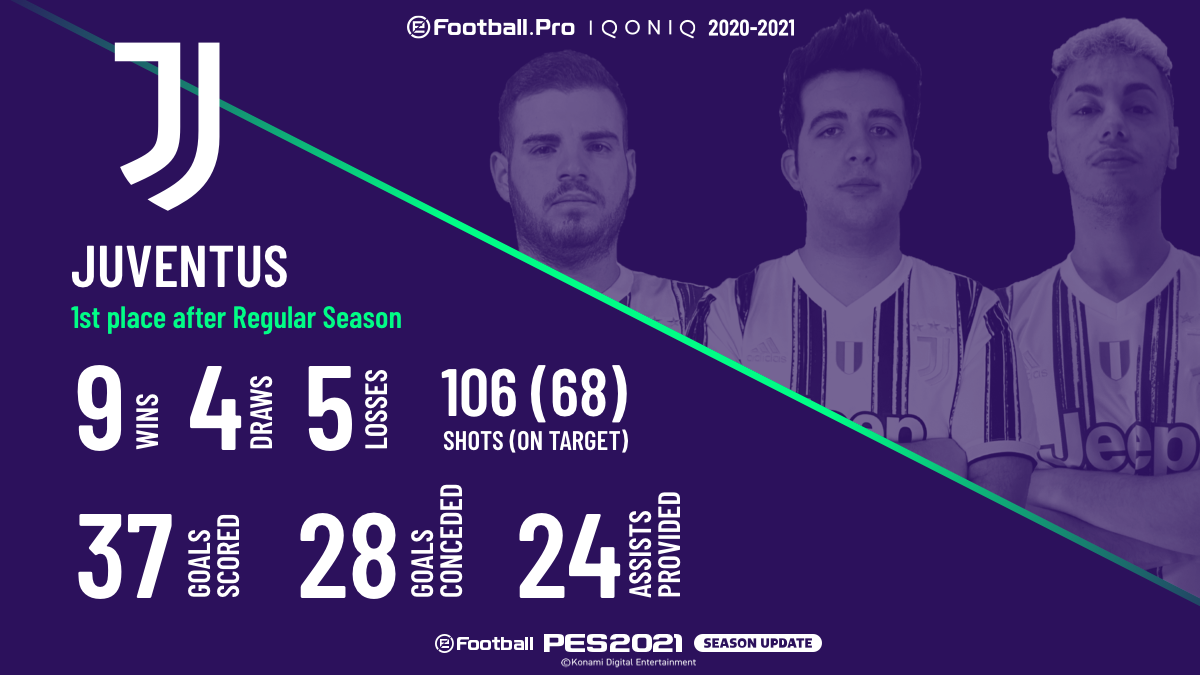 The Italian club concluded the Regular Season of eFootball.Pro IQONIQ in first place. They made the second highest number of goals, shots, and corner kicks (45). This was their second season competing in eFootball.Pro IQONIQ, with an identical roster to the 2019-20 season. So far, Juventus has achieved two prizes throughout the Regular Season, including ETTORITO97’s MVP award of Matchday 2 and IL DISTRUTTORE44’s best goal award of Matchday 5. 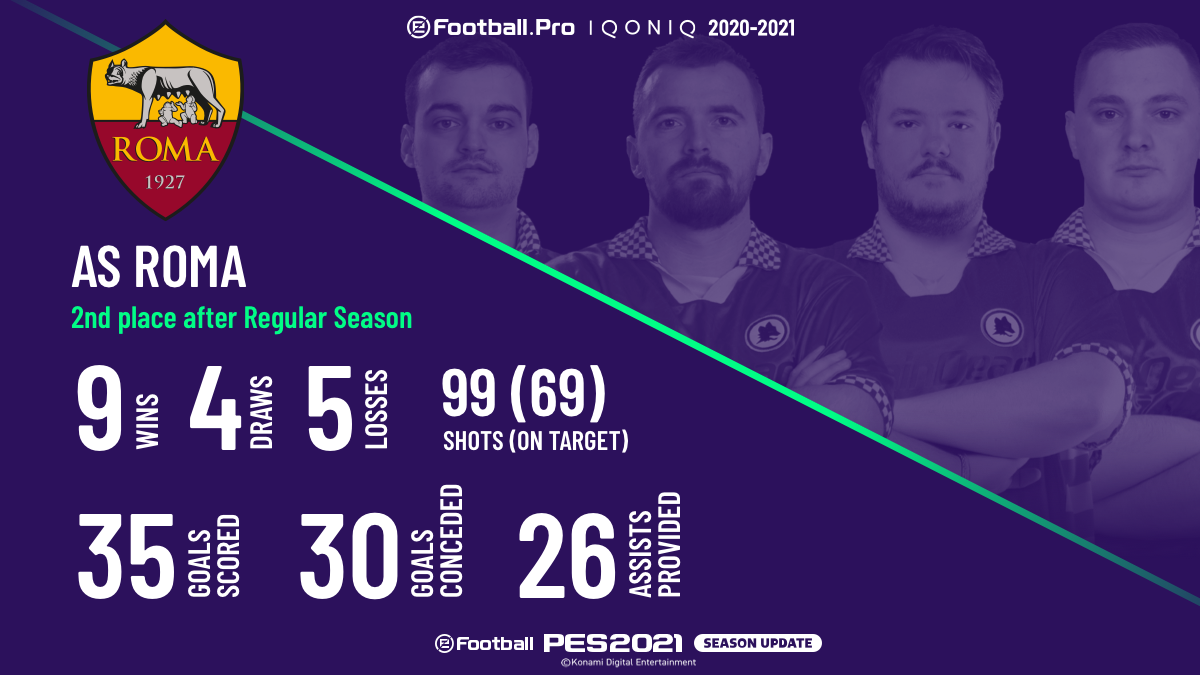 In their debut season competing in eFootball.Pro IQONIQ, AS Roma ended the Regular Season ranked second amongst the ten clubs. As a team, they achieved the third highest amount of assists and shots, with the second highest amount of their shots being on target. Throughout the competition, they remained between 5th and 7th place, finally breaking into the second place position when they needed it most for Semifinal qualification. They have been recognized with two MVP awards, both for the Serbian players: RoksaCzv22’s from Matchday 6 and KEPA’s from Matchday 8. 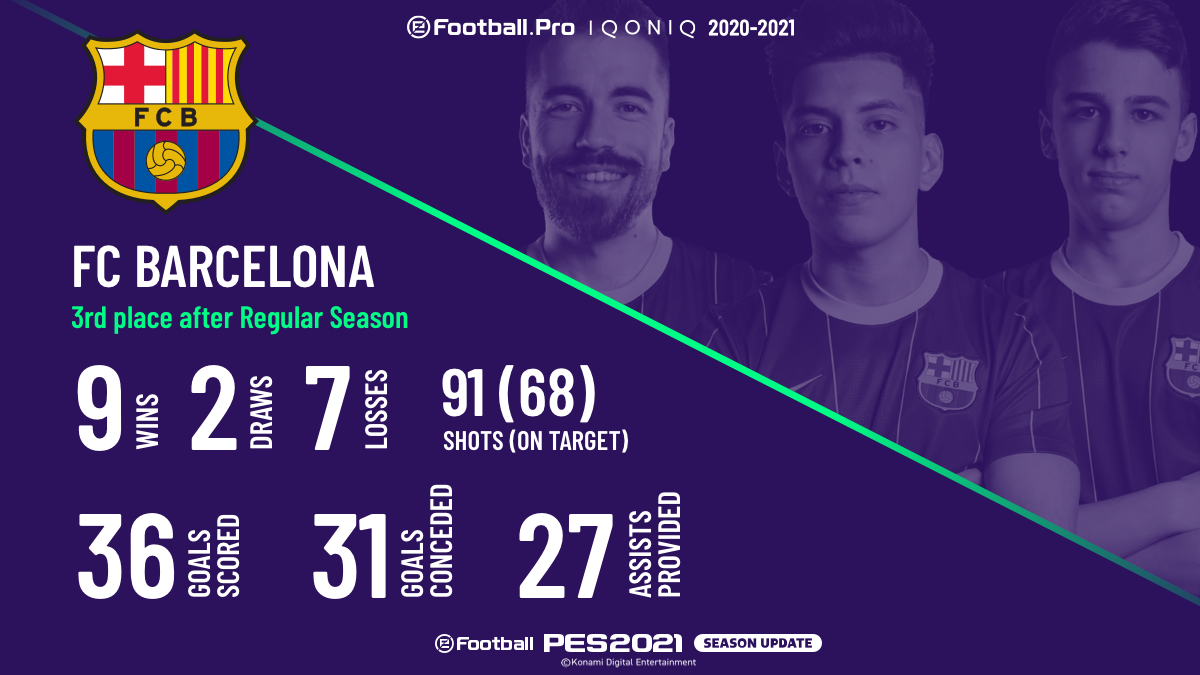 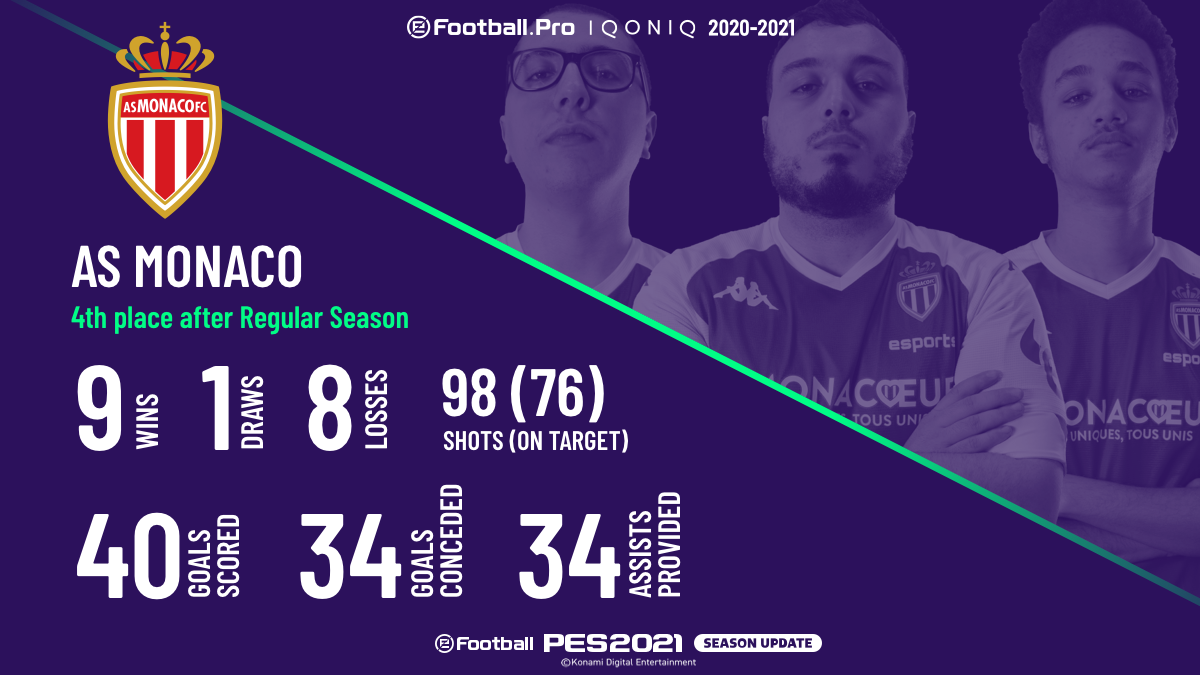 After placing first for three of the nine matchdays in the Regular Season, AS Monaco landed themselves in 4th place by the competition’s conclusion. They have also participated in three consecutive seasons of eFootball.Pro IQONIQ, with this season’s roster being identical to the 2019-20 lineup. They led the league this season in goals, assists, and shots on target. Two of the Monegasque team representatives have been recognized as Most Valuable Player during the 2020-21 season, Usmakabyle in Matchday 1 and Kilzyou in Matchday 4.

The Gunners fought their way into the top rank on the league table during Matchday 5, and remained there for the following two matchdays. They qualified for the Knockout Stage by securing 5th place at the end of Matchday 9. This was Arsenal FC’s second year competing in eFootball.Pro IQONIQ, however this season with an entirely new lineup. They were the recipient of two awards this season, their team captain INDOMINATOR’s MVP award from Matchday 7, and barboza’s best goal prize for his shot in Matchday 6. 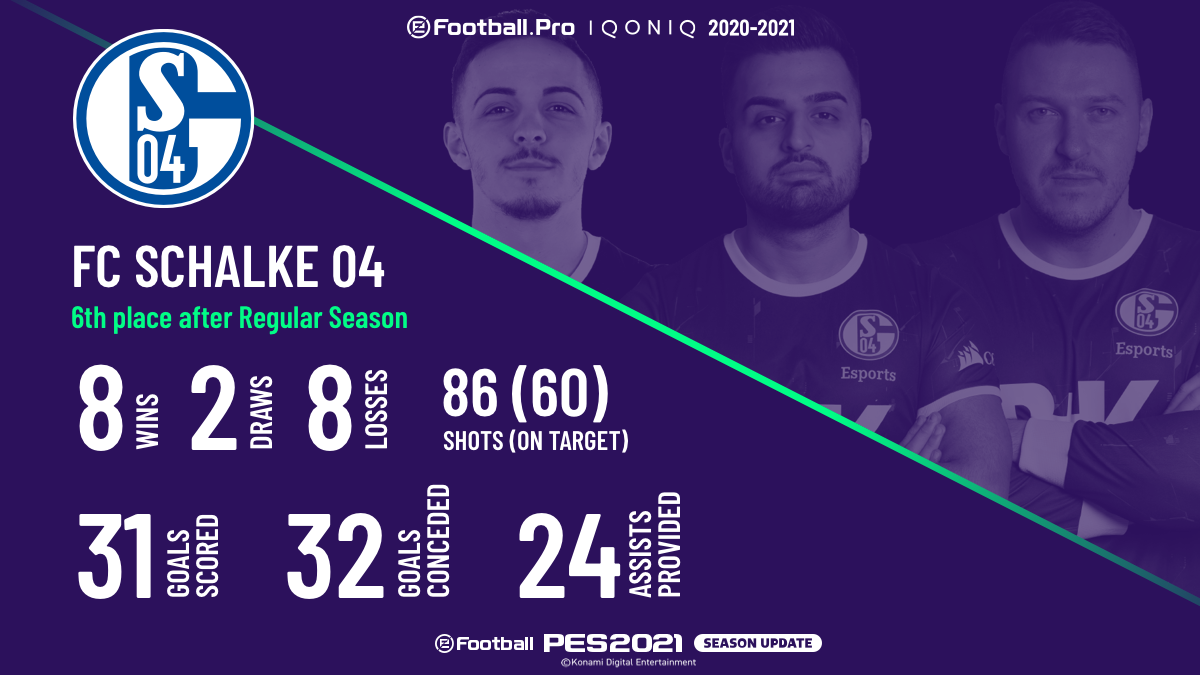 The German club was the last to qualify for the 2020-21 Knockout Stage, ending the Regular Season in 6th place. They are also one of the few clubs to have participated all three years in the league. They have led the entire league with the most saves throughout the season (34), and achieved the second highest number of clean sheets, accomplishing four shutout wins. EL_Matador’s goal in Matchday 2 earned him and his club the best goal award of the competition. 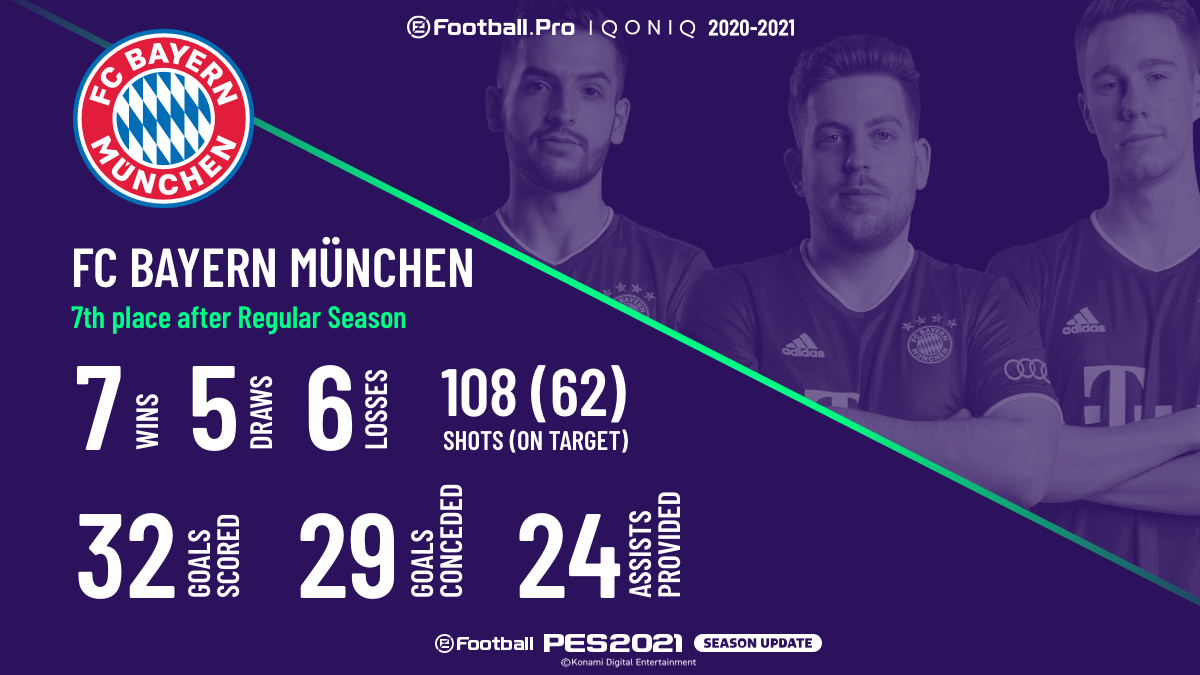 This was the reigning eFootball.Pro Cup champions’ second season playing in eFootball.Pro IQONIQ, returning this year with an identical roster to the 2019-20 season. They took more shots than any other club this season, and also achieved the most clean sheets, not allowing their opponents to score a single goal in five of their games. In addition, they took the most corner kicks (50) and conceded the least amount of goals (29). Alex Alguacil earned an award for his club in the seventh matchday when his impressive shot was recognized as the best goal. 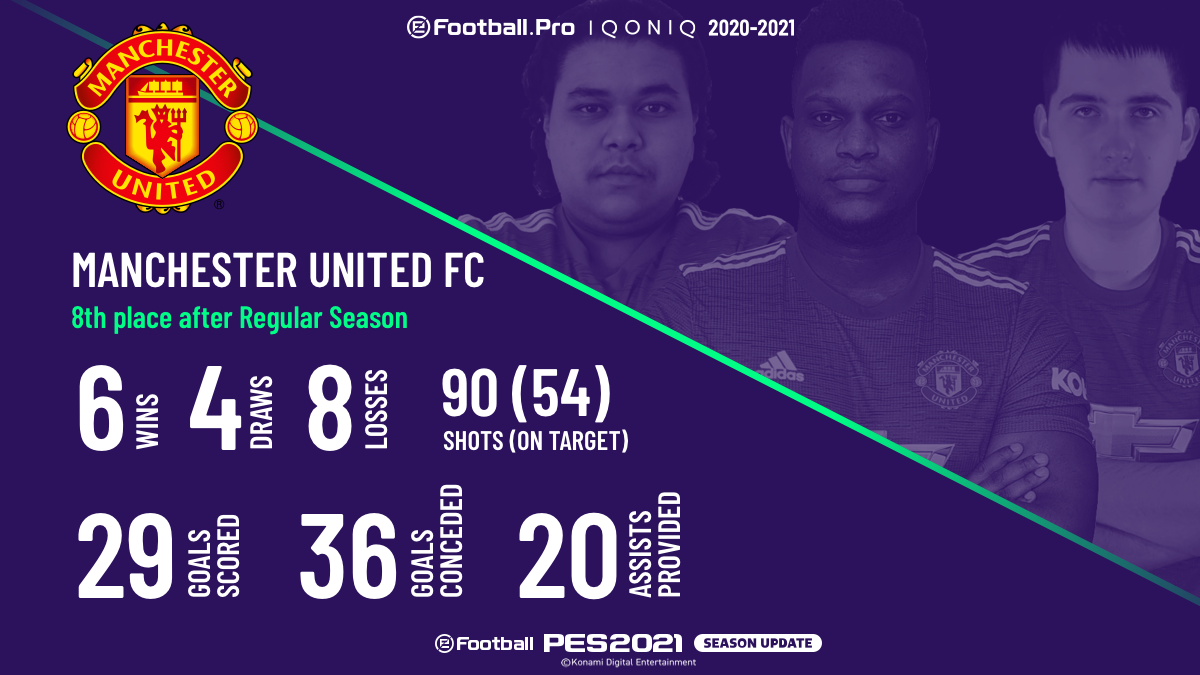 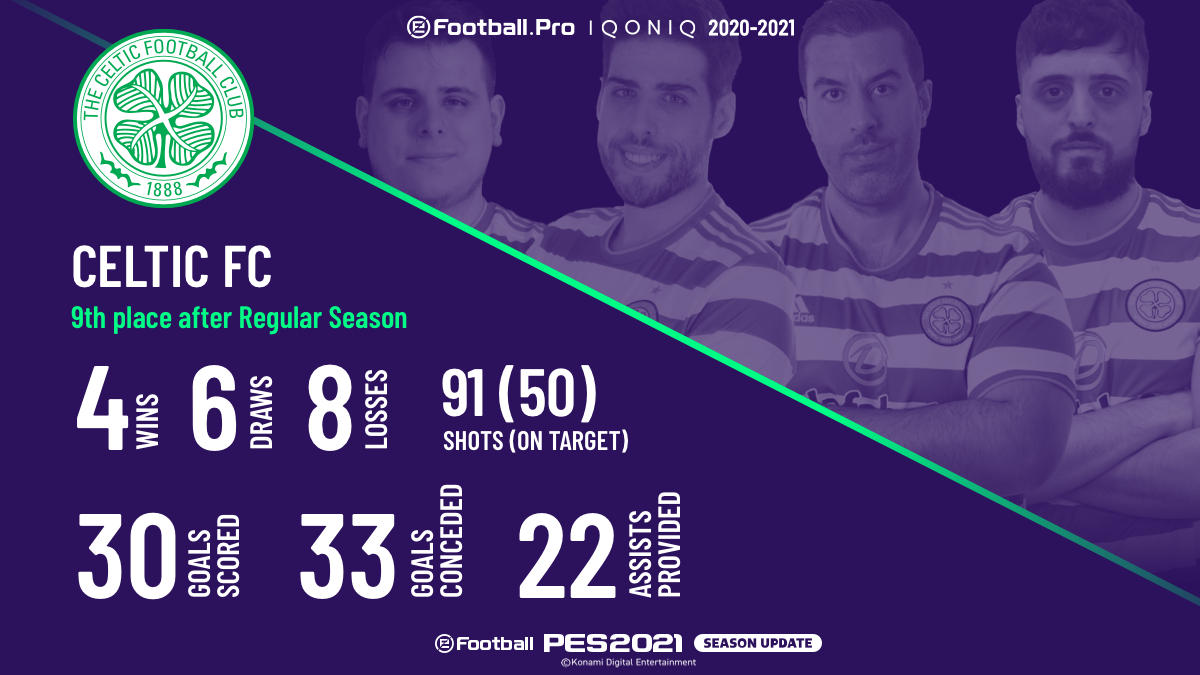 The Scottish team has participated in the league for the past three seasons, however this time with three rookies and returning player turned captain, Jorcha. They are tied with one other club for achieving the second highest amount of saves throughout the Regular Season (31). Two Celtic FC representatives were presented best goal awards, Jorcha for his shot in Matchday 5 and Gagliardo28 for his in Matchday 8. 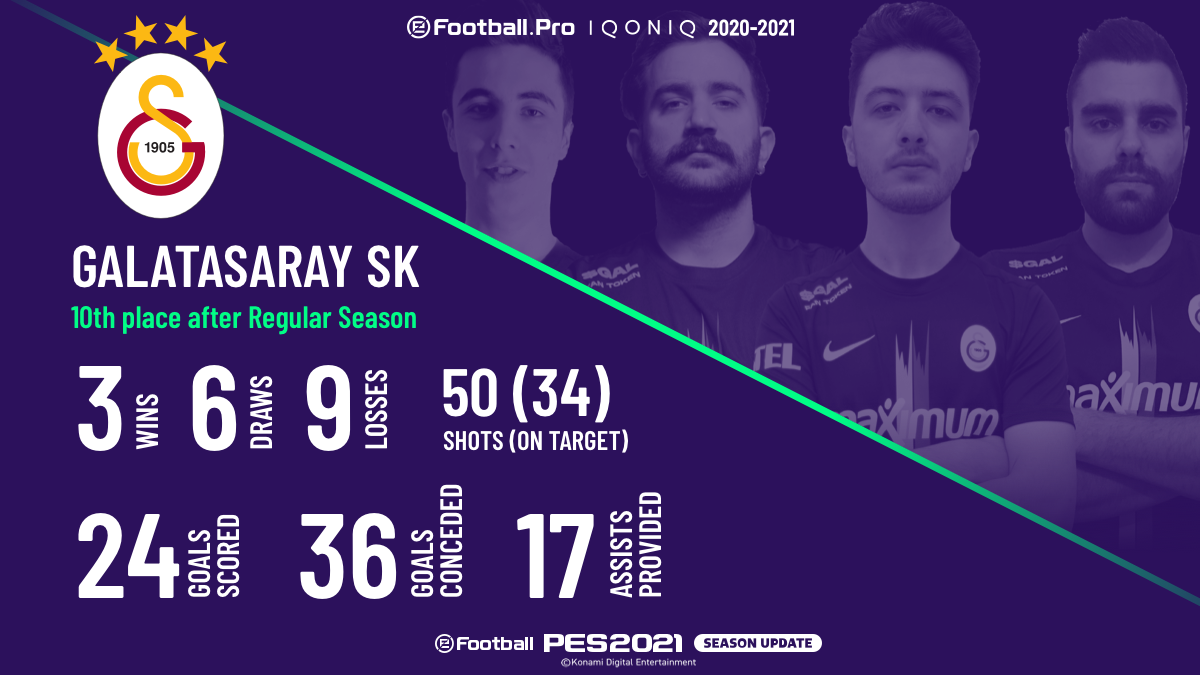 The 2020-21 season was Galatasaray SK’s debut, with the Turkish club being the only team to enter the competition with a roster of all rookies. Galatasaray SK tops the list for defensive gameplay as a club with almost 45,000 points, with the next highest club being unable to break past the 43,000 point threshold. They are also tied with one other club for accomplishing the second highest amount of saves throughout the season (31).