Joining teammate Usmakabyle as the Most Valuable Player award recipient for his gameplay in Matchday 4, Kilzyou continues to dominate in eFootball.Pro IQONIQ

AS Monaco’s roster has received another MVP recognition in the 2020-21 season of eFootball.Pro IQONIQ, this time for Kilzyou’s standout performance in Matchday 4. He led both games of the February 13th competition in CO-OP points, with the highest number of points so far this season, accumulating 1,935 points in Game 1 and 1,999 points in Game 2. This dominant gameplay was a clear contributor to the six point victory that AS Monaco achieved against FC Schalke 04 in the fourth matchday, which was critical in raising the Monegasque squad back up in the rankings, from 5th place before the competition commenced to 2nd as it concluded.

The first game was a spectacle of goals and competitive gameplay, with Kilzyou emerging as the star player after achieving a hat trick of three crucial goals that led to Monaco’s success. His first came in minute 65’ which equalized the score after his club lost their early lead to FC Schalke 04. He followed up with another in minute 77’ to create their second lead of the day, and his third shot of the game was recorded in minute 84’ which earned AS Monaco their hard-fought 4-5 victory. He also led the competition in shooting (300) and passing (362), and impressively turned all three of his shots made into goals for his club. 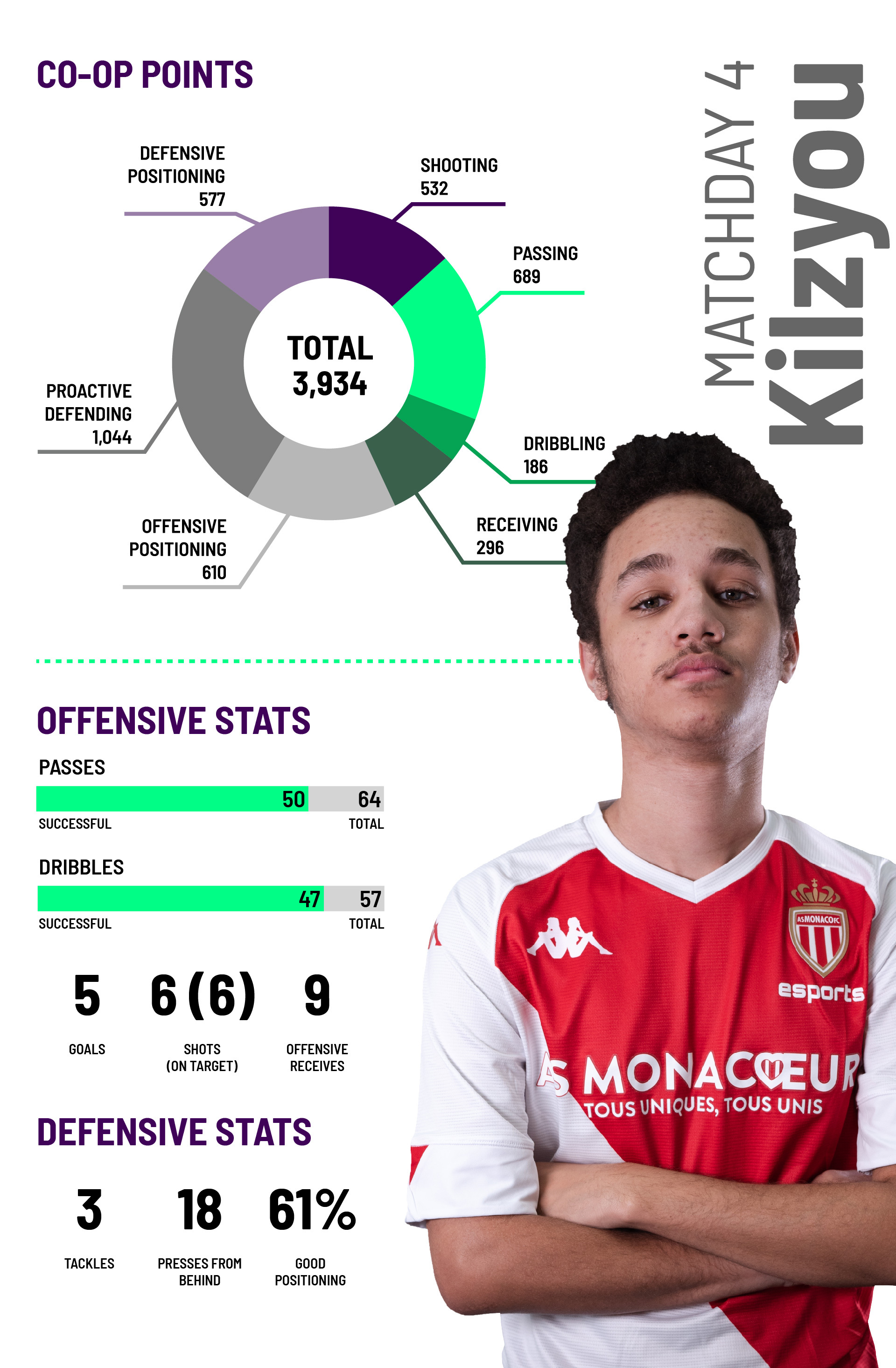 The second game ended with a much more comfortable result for Monaco, a shutout victory of 0-4. Kilzyou was responsible for the third and fourth shots, one in minute 82’ and the following in minute 91’, completing his impressive five goal feat which hasn’t been achieved by any other eFootball.Pro IQONIQ player so far this season. He led in passing once again (232) and made all three of his shots on target. The striking-through and high shooting skills he displayed throughout the competition made waves in the league, earning him the MVP title.

The youngster has showcased his skill not only in the awarded matchday, but throughout the entire season. He currently leads the league in goals (11) and shots on target (17). Kilzyou is no stranger to the MVP recognition, as he also received this award in Matchday 1 of the 2019-20 season for his debut performance in the league. At the point when that season was postponed indefinitely, he was the leading goal scorer (12), and had taken the most shots (27), with the highest number of them on target (22).

Read what happened in the first match...