ASM Kilzyou was recognized with the MVP award for his performance in the December 14th competition, after scoring three goals and leading the entire matchday with 3580 CO-OP points

AS Monaco’s ASM Kilzyou proved that the Monegasque club made the right decision by adding the young player to their 2019-2020 eFootball.Pro roster through his competitive gameplay in Matchday 1, earning him the first MVP title of the season.

ASM Kilzyou dominated from the start, being the only player to break past the 2,000 CO-OP point threshold during the first game of the matchday with 2,100 points. He also held the highest ranking in passing, dribbling, receiving, and proactive defending. While only one of the six goals from the first game was ASM Kilzyou’s, it is clear he played a vital role in the other goals scored against Arsenal FC by leading the game with ten instrumental passes, twelve good receives, and instrumental dribbles with an almost 90% success rate.

In Game 2 of the first matchday, ASM Kilzyou proved himself to be a successfully versatile player by switching to a more offensive gameplay. While still leading the game with eight instrumental passes, another success rate of almost 90% in dribbles, and an assist, he also took the most shots on target, scoring two of the three goals against the English team. Being able to transition from a defensive player to an offensive one as seamlessly as ASM Kilzyou displayed is an important skill that helped lead the team to both victories against Arsenal FC, gaining them six points by the conclusion of Matchday 1. 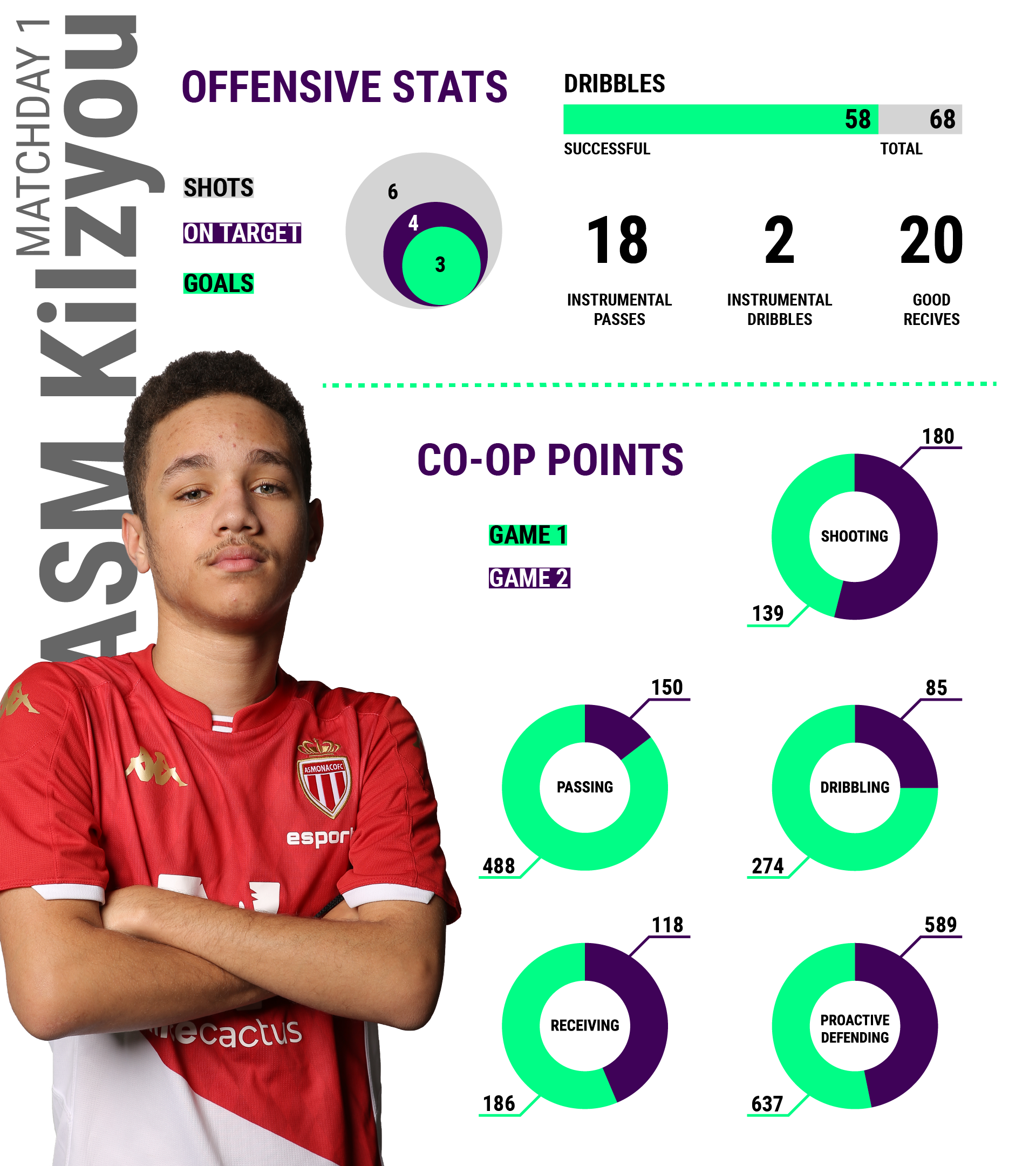 Following his goal scored at the end of the first game of the matchday, commentator Harry Channon stated: “It’s the youngster again. It’s Kilzyou again. I believe, looking at the stats, he’s MVP of this game. He’s a brilliant star. To be in the company of who he’s in with... to show that you can play at that level, that you’re alongside them, is brilliant to see.” While the French player is the second youngest in the league, he has continued to prove himself as a top competitor throughout the rest of the season to date. He is currently ranked as the top scorer in the eFootball.Pro league with twelve goals, and also leads in the amount of shots on goal (27), with over 80% being on target.

As ASM Kilzyou looked back on his performance during the first matchday, he reflected that the first goal of the second match was the best moment of the game because it was “very important”. When asked how it felt to be recognized with the MVP award during the ceremony, he said: “I feel very very happy, but the most important thing was to take the 6 points against Arsenal.” The young player has made it clear from the beginning of the competition that he is a team player looking to help win AS Monaco a second eFootball.Pro championship title.