Following the 2020-21 season’s kickoff of Matchday 1, it was Usmakabyle who earned the MVP title after an impressive display of PES skills and acquiring 3,319 CO-OP points

For the third season in a row, Usmakabyle’s performance was deemed worthy of the Most Valuable Player title from the first matchday of the 2020-21 competition where he earned 3,319 CO-OP points. In the first game he reached 1,648 points, with only his teammates achieving more, and in the following game he topped the list with 1,671 points while both his teammates and opponents weren't able to break past the 1,500 mark. This recognition reflects the success AS Monaco experienced throughout Matchday 1, resulting in their placement at the top of the league table with six points.

Usmakabyle is responsible for two of the three goals that were scored in favor of the Monegasque squad during the December 12th competition, with his first of the day being in minute 27’ of the first game, bringing the score to 0-2 and giving Monaco the lead they needed to end the 1-2 game in victory. His second shot was the sole goal of Game 2 in minute 56’, resulting in their second win of the matchday, a feat no other club could claim by the end of the competition. 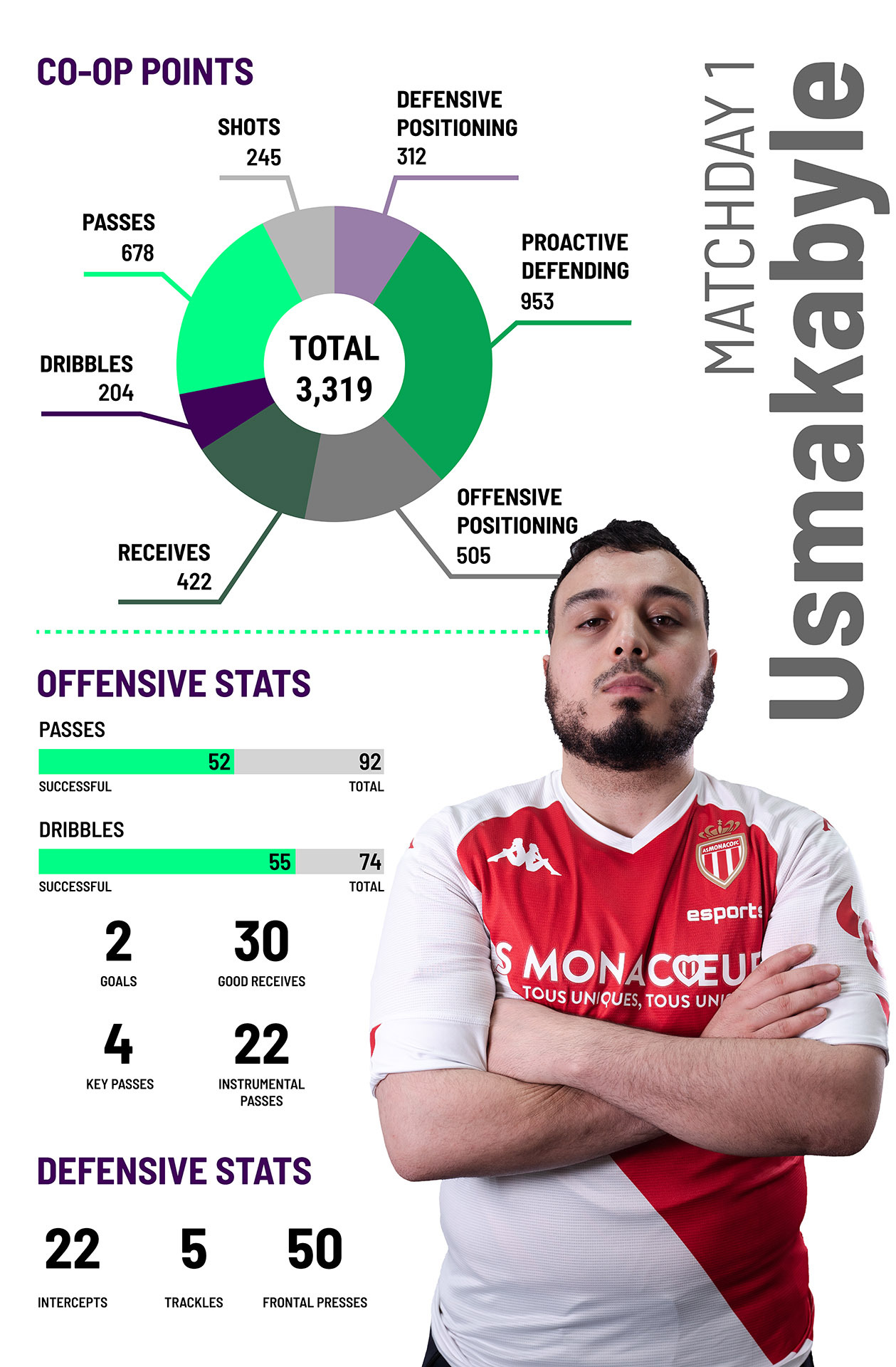 He also led the match in passes, with almost 57% of his being successful, as well as in successful dribbling at over 74%. Topping his opponents, Usmakabyle completed the most good receives (30), instrumental passes (22), and key passes (4). In addition to the standout offensive gameplay, he performed exceptionally on defense as well with intercepts (22), tackles (5), and frontal presses (50).

As one of the most highly awarded eFootball.Pro players in the league, this is Usmakabyle’s fifth time earning the title. He won the MVP award of the first, third, and fifth matchdays of the 2018-19 season, and then again in Matchday 3 of the 2019-20 competition. This is his third season in a row representing AS Monaco, being crowned the champion of the first season, and ending the second season in their unwavering first place position before eFootball.Pro 2019-20 was postponed indefinitely. Being a key player in one of the most feared teams in the league, Usmakabyle’s MVP award is just the beginning of his continued highly anticipated gameplay.

Read what happened in the first match...