The FC Barcelona captain made history as the first player to receive both awards in the Regular Season, following a performance that placed his club at the head of the league table

Following a historic performance in Matchday 3, FC Barcelona has continued to make waves in the competition as captain THE PALMA claims both the MVP and best goal award, being the first eFootball.Pro IQONIQ player to do so in Regular Season league history. He accumulated the most CO-OP points in his match against AS Monaco, surpassing his teammates and opponents with 3,482 points. This €20,000 worthy performance undoubtedly contributed to FC Barcelona’s six point victory over AS Monaco, which placed the Blaugrana squad at the top of the league table for the first time.

The first game resulted in a 1-3 victory against the Monegasque club, with THE PALMA either scoring or assisting all three goals. After providing assists to ALEX GRD for the first two goals, he accomplished the third shot himself in minute 49’, in an impressive display of collaboration with this team goal, winning the best goal award of the third matchday as well. 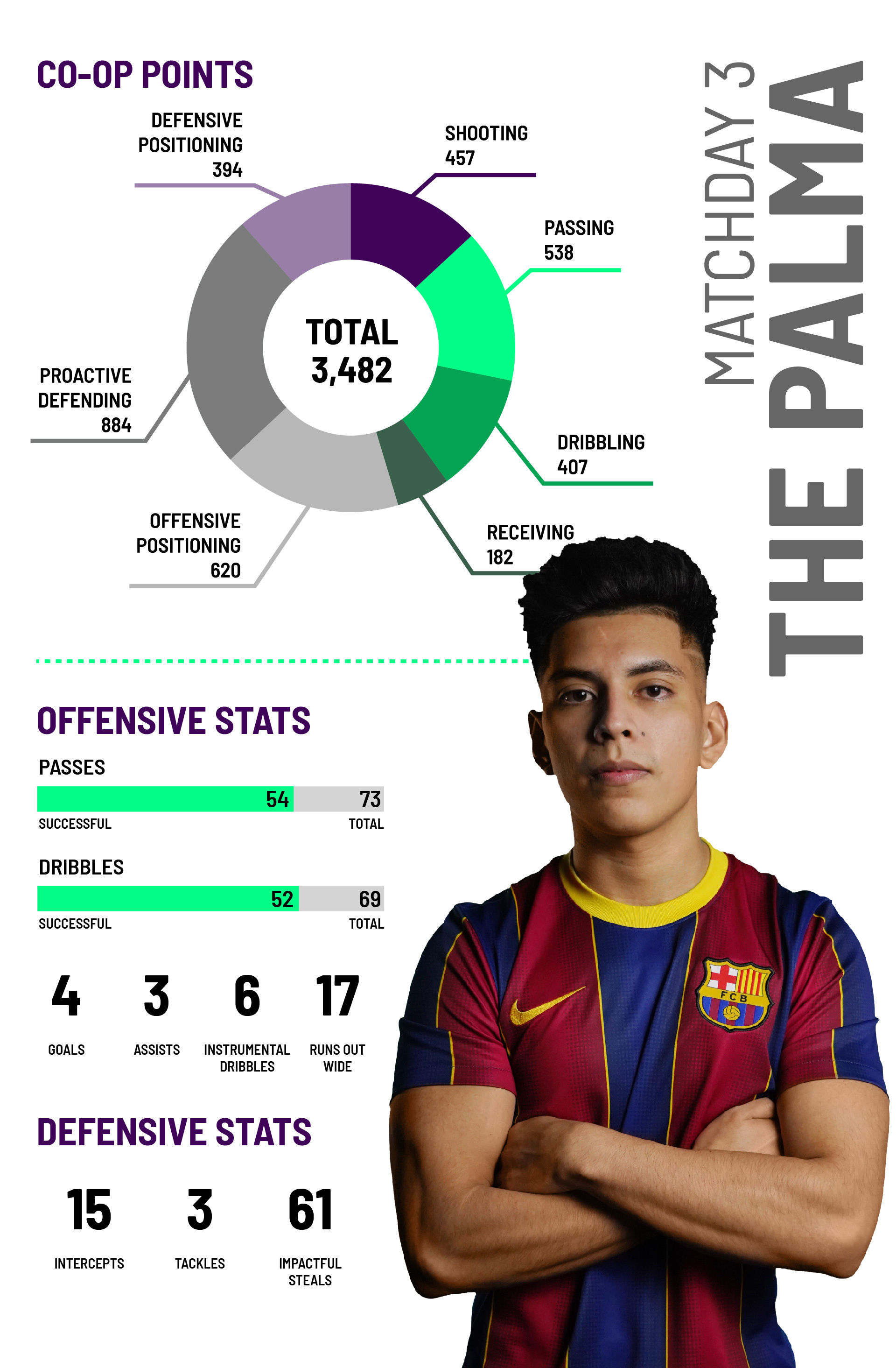 In the second game, THE PALMA proved he wasn’t done scoring goals, as he accomplished a hat trick with three successful shots in minutes 5’, 12’, and 75’, all contributing to the 1-4 result that earned Barcelona praise from eFootball.Pro IQONIQ commentators, stating that they “consider them as serious contenders for the title.” The Spanish player showed off his diverse skills by dominating all aspects of the sport. He led both games in instrumental dribbles (6), runs out wide (17), and passes, with a success rate of almost 74%. He didn’t disappoint defensively either, with fifteen intercepts, three tackles, and eleven impactful steals.

Following the January 30th competition, THE PALMA is now ranking second in assists (7), and is tied for third highest goal scorer alongside three other players in the league, all with six goals. His current success mirrors some of his achievements in the 2019-20 season, as he was also the recipient of the best goal award of Matchday 5 after a victory against AS Monaco. THE PALMA, along with his teammates ALEX GRD and ALEXR, have set expectations high for the rest of the 2020-21 eFootball.Pro IQONIQ season, as they aim to maintain their position at the top of the league table and qualify for the upcoming Knockout Stage.