For the fourth time in his eFootball.Pro IQONIQ career, ETTORITO97 has been awarded the title of Most Valuable Player, this time for his performance in Matchday 2 of the 2020-21 season. The captain led Juventus’ match against Galatasaray SK in CO-OP points in Game 1 with 1,792 points, and came in second of Game 2 with 1,890 points, only behind his fellow teammate, IL DISTRUTTORE44. With an impressive 3,682 total CO-OP points for the day, he proved his worthiness of the award while his Turkish opponents were unable to break past the 3,000 point threshold. His gameplay undoubtedly contributed to the Italian club’s jump from 8th to 3rd place in the league table following the second day of competition where Juventus was able to earn four points.

In Game 1 he scored one of the two goals made for Juventus, in minute 59’ less than ten minutes after LoScandalo scored the first of the game. This added to the final result of the tied game against Galatasaray SK, 2-2. While he didn’t directly score any of the four goals made in the following game, where the Italian club emerged victorious 2-4, he is responsible for three of the assists that led to the impressive feat. After his performance, he is now the player with the most assists at this point in the season (5), as well as second in defense points with 3,675. 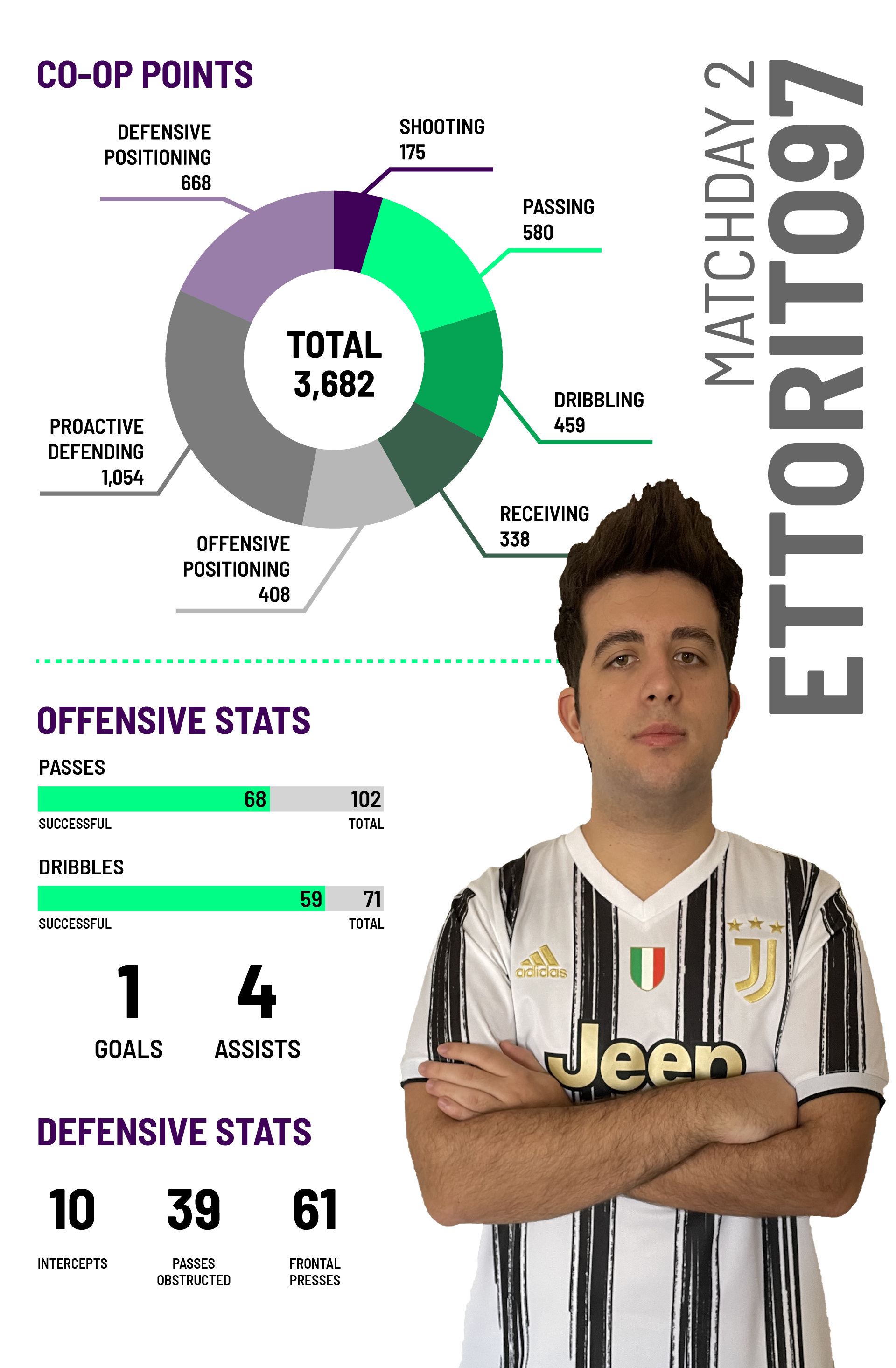 Throughout the two matches, Ettore led the competition in passes, with almost 67% of them being successful, as well as in dribbles with an 83% success rate. Although he isn’t ranked among the highest goal scorers at this point in the eFootball.Pro IQONIQ season, he is able to make up for this in defensive gameplay. He led the matches by accomplishing the most passes obstructed (39), frontal presses (61), and intercepts (10).

ETTORITO97 is no stranger to this title, as he also earned the MVP award twice in the first season, as well as in Matchday 2 of the 2019-20 season. He aided in Juventus’ elite gameplay last season that ranked them in 3rd place, just four points away from the league table topping position, when the competition was postponed indefinitely. Individually, he ended the season ranked highly as well, at 1st in proactive defense (6,017), 4th in best defense (8,400), and 5th in passes intercepted (80). After advancing themselves five rankings in a single matchday, it is clear that ETTORITO97, as well as his Italian teammates, are aiming for a championship title.

Take a look at AS Monaco's path to glory

AS Monaco, champions of the eFootball...