Juventus’ IL DISTRUTTORE44 has earned his club the second Most Valuable Player recognition of the season following his iconic performance during the March 13th competition. His gameplay resulted in the Italian trio’s six point victory, with a score of 1-2 in Game 1 and 0-4 in Game 2. He was the top player in CO-OP points for his club in the first game with 1,559 points, and led both Juventus and their opponents in the following with 1,918. His actions contributed Juventus taking all possible points against the previous first placing club, FC Barcelona, and bringing their position on the league table up from 7th to 4th.

The first game included a key goal by IL DISTRUTTORE44 in minute 11’, which was an early equalizer for the Italian team that carried them through the game until LoScandalo’s shot that brought Juventus ahead for their first victory of 1-2. In addition to the key goal, IL DISTRUTTORE44 also tied for best defensive positioning alongside his team captain, ETTORITO97, each ending the game with 349 points. He also notably led the competition in runs out wide and double-marks. 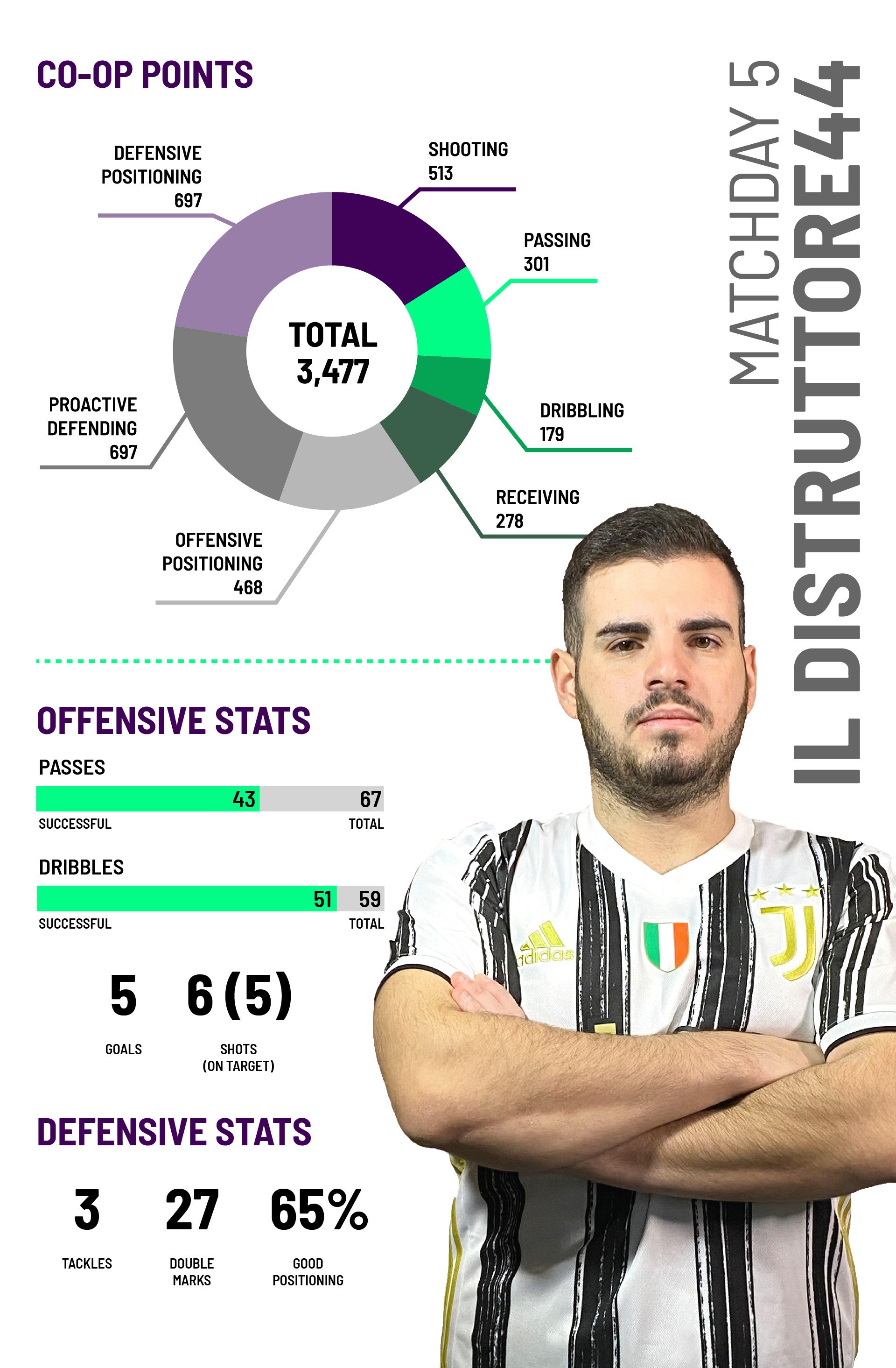 Game 2 is where IL DISTRUTTORE44 really made his mark in eFootball.Pro IQONIQ, incredibly scoring all four goals of the entire 95 minutes. He started off early, achieving his first successful shot in minute 8’, bringing Juventus into the lead from the beginning. This goal was followed by another in minute 30’, and a third to complete his hat trick in minute 78’. While eFootball.Pro IQONIQ host Adam Butcher was already praising the gameplay as “one of the most important performances” of the season so far, IL DISTRUTTORE44 scored a fourth and final shot for good measure, effectively doubling his season tally of shots in just one game, and creating Juventus’ 0-4 result. This result also created his match topping CO-OP point total of 1,918, with the next highest amount being his teammate LoScandalo’s at 1,557.

Following his impressive five goals scored in Matchday 5, IL DISTRUTTORE44 now has a total of ten, tying him for having the third highest number of goals scored alongside five other players. He is the second Juventus representative to receive the title, after ETTORITO97 was awarded MVP of the second matchday. After IL DISTRUTTORE44 provided this crucial assistance to his club, their rank on the league table rose back into Knockout Stage contention, leaving the Italian players hopeful for the remainder of the Regular Season.

Most experienced players in league hi...