The Serbain player earned the MVP title for his skilled overall gameplay, and helped bring the Italian club back within the rankings for Knockout Stage qualification

AS Roma captain RoksaCzv22 is responsible for his club’s first award recognition of the eFootball.Pro IQONIQ 2020-21 season. The Serbian player earned the €10,000 prize after his incredible display of PES skills that not only brought his CO-OP point total over his teammates and opponents, but above any other player in the league that day. He impressively reached 3,666 points during the March 27th competition, making him the only player to break past the 3,500 threshold. Although he wasn’t personally responsible for the three goals scored for AS Roma, he assisted each of them. This gameplay contributed to the draw in Game 1 and victory in Game 2 that earned the Italian club four points and brought them up to 6th place, ranked within Knockout Stage contention as the sixth matchday concluded.

AS Roma’s opponents, Manchester United FC, were ahead for the entire first half of the game by one goal, but the Italian trio managed to equalize the game in minute 54’ in order to avoid a three point loss. The successful shot was ultimately achieved by S-Venom, but assisted by captain RoksaCzv22. The MVP award recipient also led the game with 1,738 CO-OP points. Throughout the competition 71% of his passes were successful, as were 80% of his dribbles, while both his teammates and opponents were unable to achieve the same. In addition, he led the game in key passes (2), receiving (26), offensive receives (3), and runs out wide (6). 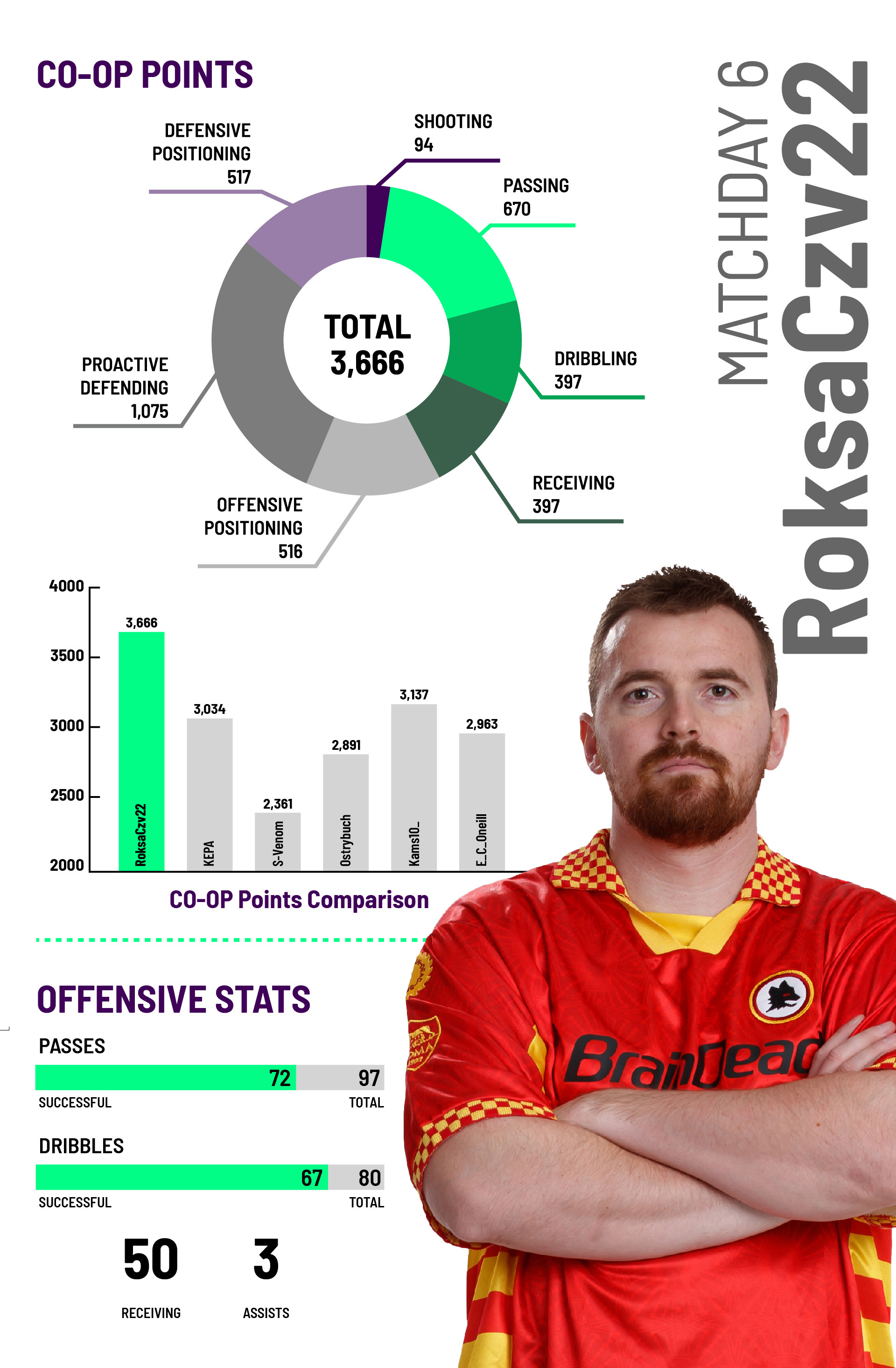 The second game included the same iconic skills, earning RoksaCzv22 1,928 CO-OP points, with the next player closest to achieving this feat being his teammate, KEPA, with 1,706 points. He led the game in passing (356), dribbling (270), and receiving (197), proving his worthiness of the MVP title. In the second game he continued to stand out amongst his competitors with 77% of his passes and 88% of his dribbles being executed successfully. He provided assists for both of the goals scored by KEPA against Manchester United FC, leading to the Italian team’s victory in the second game which resulted in their four point gain.

RoksaCzv22’s impressive gameplay has been clear not only in Matchday 6, but throughout the entire 2020-21 season to date. As his award winning day came to a conclusion, he was ranked within the top ten players for goals (10th with 9 goals), assists provided (8th with 7 assists), and defensive gameplay (2nd with 10,434 points).

MVP AS Roma RoksaCzv22
All news

Take a closer look at this season's s...