A look at ETTORITO97, IL DISTRUTTORE44, and LoScandalo’s performances throughout the most recent Regular Season

Juventus had an iconic run in the 2020-21 season of eFootball.Pro, from landing themselves in the 8th ranking on the league table following the first matchday, to ending the league placing in 1st as well as emerging from the Knockout Stage victorious. Take a closer look at the individual performances that led to their standout success as a team. 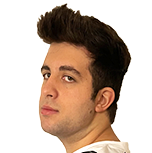 The team captain is one of the most decorated players in eFootball.Pro. He scored at least one goal in over half of the matchdays throughout the season, achieving eight total in the 2020-21 Regular Season. He impressively provided at least one assist in all matchdays but the fourth, then achieving a season record of five assists in the following competition. His fifteen assists were the second highest number achieved in the Regular Season. He also ranked second in defensive gameplay with 15,598 points and proactive defense with 10,247 points. Overall, he had the fourth highest amount of CO-OP points with 29,233 points and was awarded the second MVP award of the season for his performance in Matchday 2.

IL DISTRUTTORE44 was within the top ten goal scorers of the 2020-21 season, with twelve of his successful shots being added to the scoreboard in Juventus’ favor. Additionally, he ranked within the top ten players for shots taken (9th with 32), defensive positioning (8th with 5,200 points), and key passes (9th with 16). Following his gameplay on the fifth matchday of the season he was awarded the prize of Most Valuable Player, making him the second Juventus representative to achieve the feat at that point in the most recent year’s competition.

LoScandalo started off the 2020-21 edition of eFootball.Pro by scoring the very first goal of the season, in minute 12’ of the first game Juventus played against FC Bayern München. He went on to score two additional goals that day, making him one of only two players to achieve three successful shots that day. He concluded the Regular Season as the third highest scorer with sixteen goals total. With 49 shots taken over the nine matchdays, LoScandalo topped the list. The final Most Valuable Player award of the Regular Season was presented to him after his impressive gameplay that included two goals and one assist, making him the third and final Juventus player to receive the honor as the competition neared its conclusion.

All three members of the Juventus squad also managed to score at least one goal in the Knockout Stage as well. With a bye in the Quarterfinals, they advanced directly to the Semifinals where they faced FC Schalke 04. LoScandalo and IL DISTRUTTORE44 earned the win in the first game with three goals total, and ETTORITO97 was the sole goal scorer in the second and third game, ultimately advancing his club to the Final against AS Monaco. With a first goal by the team captain and two following shots by LoScandalo, they earned the title of Knockout Stage champions. Of the five assists provided throughout the competition, IL DISTRUTTORE44 provided three of them in the Semifinals, and ETTORITO97 added one in the Semifinals and was the only assists provider with his last one in the Final.