The eFootball™ competition for any eFootball™ user is meant to serve as a platform for amateur esports players who want to become professionals next year. 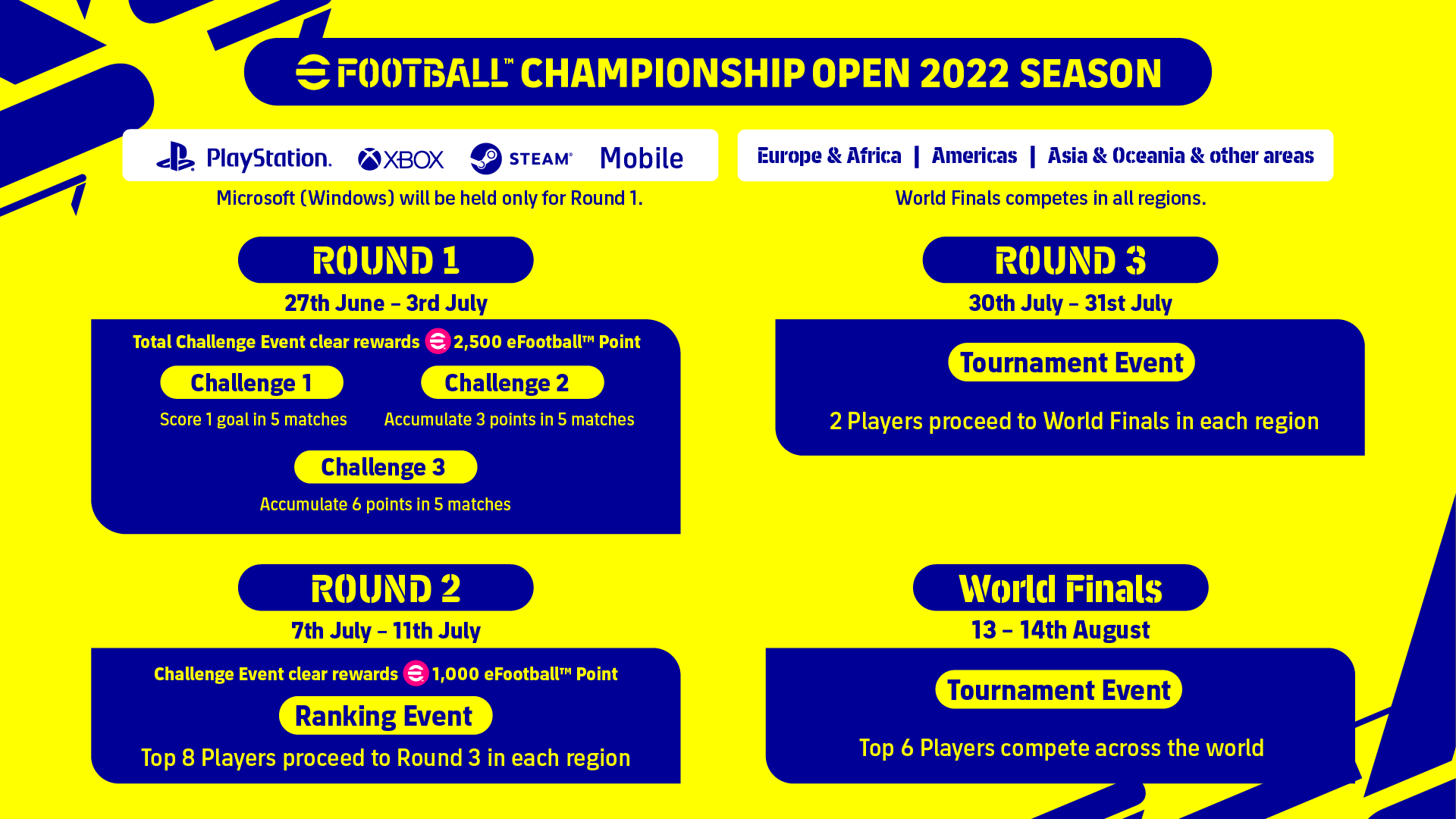 The eFootball™ Championship Open will be held in June and July and it will be divided into 3 rounds prior to the World Finals. From June 27th to July 3rd, any eFootball™ user will be able to automatically join the tournament by enjoying 3 Challenge Events in the game, without any special application process required. A reward of 2500 eFootball™ points will also be given for completing all 3 Challenges, which are the following:

In order to proceed to Round 2, players must clear Challenge 3 in up to 5 matches with a selected Dream Team. Everyone that wins a place in Round 2 will have exclusive access to a special Challenge Event from July 7th to July 11th. In this round, participants will use their Dream Teams to play matches against each other, gaining rewards when completing the objectives. Only the latest 15 matches played in the Challenge Event will count towards advancing to Round 3 and the results of every participant will be tallied and displayed in the tournament's Ranking Page. The top 8 of each platform and region (being these 3 regions the following: Europe & Africa; Americas; Asia & Oceania & Other Areas) will pass on to Round 3 and will be rewarded with 1000 eFootball™ points.

Round 3 of the competition will be held on July 30th and 31st and will follow a tournament format of 1-vs-1 online play-off matches with extra time and penalty shoot-out to break the tie. The match-ups will be obtained online after participants play in a special Challenge Event and the top 2 players per platform in each region will advance to the World Finals.

During the eFootball™ Championship Open period, special “Login Campaigns” will be carried out and all users will have the chance to earn up to 200 eFootball™ coins and 6 Chance Deals to boost their Dream Teams simply by logging in the game every day during each campaign period. The Special Campaign Volume 1 is held until next June 30th at 01:59 (UTC) and Volume 2 starts from then until July 7th at 01:59 (UTC). For more information, head over to https://www.konami.com/efootball/en-us/topic/promotion/campaign/20/

The World Finals will be the pinnacle of the eFootball™ Championship Open. It will be held online on August 13th and streamed worldwide on August 14th in our official eFootball™ YouTube channel. The World Finals will host the 2 best players per platform and region, making a total of 24 candidates competing for the title also under a tournament configuration of 1-vs-1 online play-off matches with extra time and penalty shoot-out to break the tie. The participants on each platform will be divided into two groups of 3 players each, playing against each other. The winner of each group will play in the grand finale of their platform.

Participants will choose their favorite from the 8 eFootball™ Championship Pro participating clubs and tune their Dream Team to have only players from that club, while keeping the team's Collective Strength within a set range. Each platform will have its own winner, who will have the opportunity to participate in the eFootball™ Championship All Stars, which is planned to be held in early September.

The eFootball™ Championship Open receives an overwhelming welcome every year, amassing more than 1 million participants worldwide. For all amateur eFootball™ players the tournament serves as a platform to get exposure to one of the 8 Clubs participating in eFootball™ Championship Pro. FC Barcelona, Manchester United FC, FC Bayern München, Arsenal FC, AS Roma, Celtic FC, Galatasaray SK and AS Monaco will be watching the World Finals to see if they can find some hidden gems, so World Finals’ participants will have the opportunity to be signed by one of them for the next season and become professional esports players.

For all the latest news on eFootball™ tournaments and for further information, please follow: https://efootballpro.konami.net/

For any content related to the eFootball™ universe, visit konami.com/efootball

Tune in to the eFootball™ official accounts and don't miss any news!

Find out when the World Finals will b...