AS Monaco, champions of the eFootball™ Championship Pro 2022

The last day of the tournament saw the match for third place and the grand final. After three weeks of pure eFootball™ with exciting matches and lots of goals, we reached the most awaited event of the year. First the bronze medal match was played, which was won by Celtic FC in two games after victories by Kilzyou over ASR_STIFFLER and Lotfi against ASR_URMA43. Subsequently, the grand finale of the tournament revealed the champion of the 2022 eFootball™ Championship Pro season: AS Monaco.

Today's final crowned AS Monaco as the 2022 season champion after they defeated FC Bayern München in two games. Nekza defeated FCB_Jose by the narrowest of margins and finished as the tournament's top scorer with 16 goals, a more than reasonable argument to convince the KONAMI selection committee to award him the tournament's MVP in his debut year. With an excellent performance throughout the tournament, Nekza led his team and held them up when Usmakabyle and GuiFera were not delivering enough, so the award seemed a fitting recognition for a star who had just been born. Usmakabyle finally won the long-awaited eFootball™ title after two years as a runner-up and added to his legend as one of the greatest players in eFootball™ history by scoring the winning goal and taking the championship in the last minute. The Goal of the Day, however, went to FCB_Mestre for his great strike from Gnabry to make it 3-3 with 20 minutes to go.

Prior to the start of the two matches of the day the Best Goal of the Quarterfinals and Semifinals was also awarded to Usmakabyle for his great play and finish against Galatasaray’s Kepa_PFC. 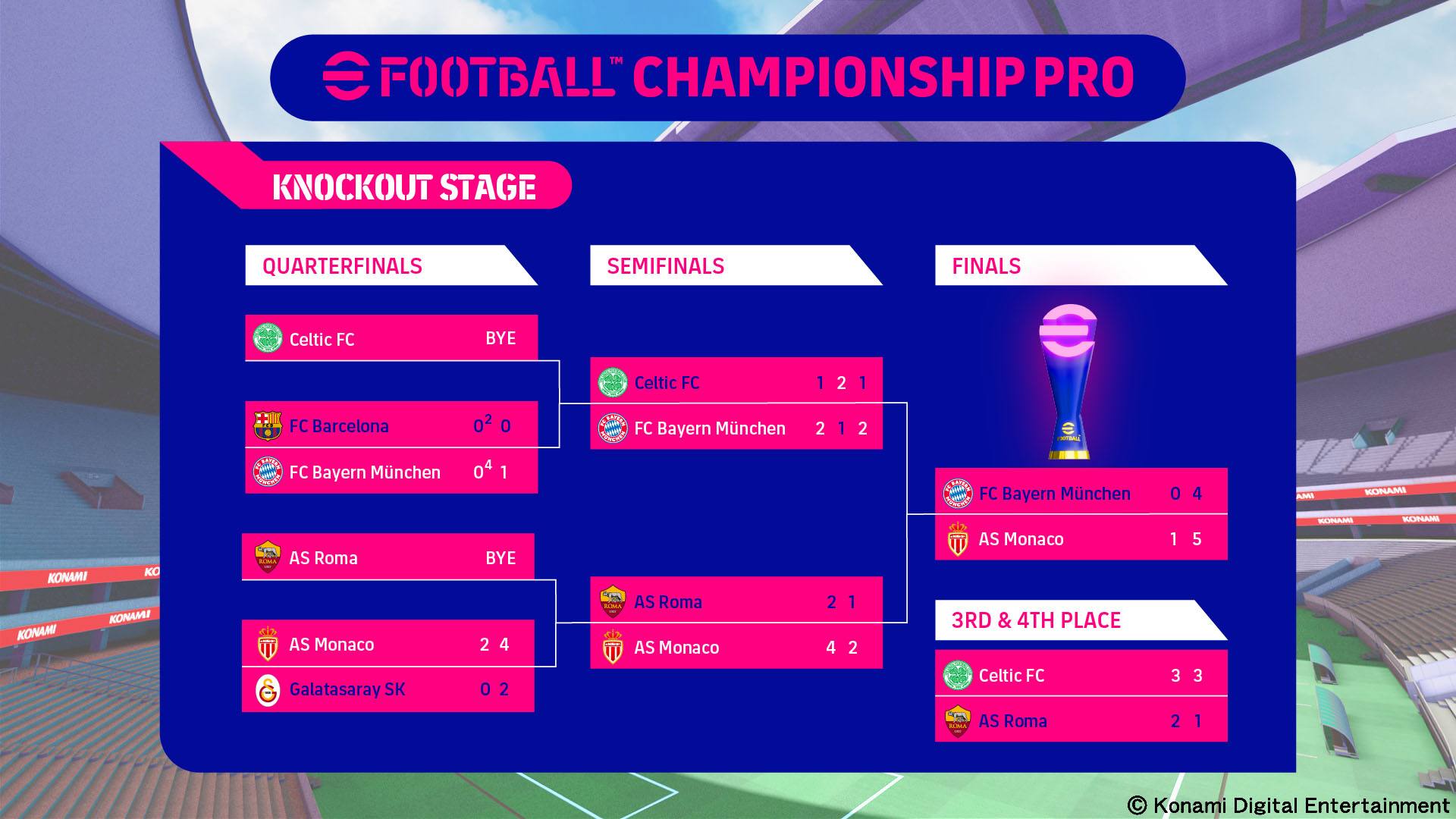 Consolation match for two teams that had finished first in their respective groups and to the surprise of the eFootball™ spectators, neither could overcome their Semifinal rivals. Celtic FC lost 2 games to 1 against FC Bayern, being Lotfi's the only victory against FCB_Mestre. The Romans were also unable to beat AS Monaco who defeated them in two games, first with Nekza's victory over Gagliardo28 and then Usmakabyle's against ASR_URMA43. The match would serve at least to get the bronze medal.

Both players were coming from good performances in the championship. The player of the Scottish team had been elected the Best Player of Group A, while ASR_STIFFLER had been one of the great revelations of the tournament, although he had not been able to play in the Semifinals because the match did not reach 3 games. The match started with the fastest goal of the season. ASR_Stiffler in the same kick-off play reached the opponent's goal and scored the 0-1 in exactly 1 minute. However, the surprise did not leave Kilzyou paralyzed and he responded quickly with the equalizer in the 26th minute and only 5 minutes later he scored the second to take the lead. Half an hour into the match and we already had 3 goals, but it was not going to stop there. In the 40th minute, Kilzyou again linked a series of passes on the edge of the box and with a good shot he made it 3-1 and the game went to the break. In the second half, ASR_STIFFLER responded first in the 51st minute, increasing the pressure on the French player. From that moment on both controlled very well the advances of the other and although both had clear chances the result remained intact and the first game ended up falling to the Scottish side by 3-2.

Lotfi came from being the only Celtic FC player to win his game in the Semi-Finals against FCB_Mestre, while ASR_URMA43 after having qualified for the Semi-Finals as the Best Player in Group B lost his match against Usmakabyle. Both top players promised an entertaining match. And so it was. Lotfi scored one of the fastest hat-tricks of the tournament in just 22 minutes after scoring from a corner in the 4th minute, then in the 18th minute and finally in the 22nd minute. ASR_URMA seemed disoriented with the game proposed by Lotfi and struggled to adapt to the situation of having to come back from 3 goals down. In the 33rd minute they got the first for the Romans and cut the deficit, but could not cut the deficit any further before half time. The second half presented a more evenly matched game, with Lotfi less switched on but more conservative. ASR_URMA43 became increasingly frustrated as the minutes ticked by as they failed to reduce the Scottish lead and eventually the game ended in a 3-1 victory for Celtic FC to the disappointment of the Romans. The team in green and white took third place in the tournament and AS Roma had to be content with fourth place.

The grand final was in sight and the eFootball Championship Pro 2022 trophy was up for grabs. The final brought together 6 of the best players in the world wearing the jerseys of two historic teams in the competition. The Germans had won the title in 2020 with the same squad formed by FCB_Jose, FCB_Mestre and FCB_Alguacil. The three Spaniards were not the only ones who knew what it was like to play in a final of this championship, as Usmakabyle was playing in his third consecutive final here, all with AS Monaco, but without victory for the French on the previous two occasions. The 3 times world champion was accompanied by the young star of the moment, Nekza, provisional top scorer of the tournament with 15 goals, and the also world champion and 5 times Brazilian champion, GuiFera. The stage was set for one of the most eagerly awaited matches of the year.

The first game pitted the German team captain FCB_Jose against the young Monegasque star, Nekza. While the former had proved his solidity by conceding few goals throughout the tournament and having secured both Quarterfinals and Semifinals victories, the latter boasted a surprising goalscoring ability by securing an average of 3 goals per game with 15 goals scored in his five games played. With this track-record in mind, the first contest of the final looked more exciting than ever.

The match started extremely evenly balanced. Both players were very well positioned on the pitch and perhaps the tension of the moment prevented them from playing as relaxed as they would have liked. The game went into halftime goalless, but in the second half the lines of each team began to open up. In the 52nd minute FCB_Jose scored a goal but it was disallowed as the striker was in an advanced position. The offside had given the Germans false hope but the Spaniard continued to defend his position without fear against a Nekza who was growing in his attacking runs. In the 81st minute, Nekza finally saw his persistence pay off with his 16th goal, bringing Monaco's first victory closer to home. The last 10 minutes were a constant siege by FC Bayern trying to force extra time, but Nekza held the defense and secured AS Monaco's first win of the final. Now Usmakabyle had to do the rest.

A decisive match that could decide this season's champion if AS Monaco were to repeat their victory with Usmakabyle. In front of him, a remarkable FCB_Mestre, coming from a great season, would not make it easy and would have the hard task of defeating the three-time world champion to ensure a draw in the final and force the third game. The tension was in the air, the definitive moment of the year had arrived in eFootball™ .

The match started again with an early goal by Usmakabyle in the 6th minute. The match was going against FCB_Mestre at the beginning, but the Spaniard knew how to react and, braiding a play of magnificent passes, he got the equalizer with a great finish by Coman. Usmakabyle must not have liked the equalizer and just five minutes later he took the lead again. The Monegasque lead was extended just two minutes later when Usmakabyle made it 1-3 with a goal following a through ball. FCB_Mestre did not give up against the constant Monegasque invasion and managed to pull one back in the 38th minute. The game went into the break with the score at 2-3 and in the second half FCB_Mestre tried to go one step further to force mistakes from the world champions. Usmakabyle was doing a lot of damage sending the ball long behind the German defence, but fortunately for the Bavarians, FCB_Mestre was able to cut out his opponent. In the 66th minute, FCB_Mestre equalised with a goal from Gnabry into the top corner of the net. The comeback was just around the corner and FCB_Mestre managed to make it happen with a fourth goal in the 73rd minute. But Usmakabyle again showed his ability to minimize damage and in the 80th minute he forced a 4-4 draw with a good move and goal by Ben Yedder. The last 10 minutes were agonizing for both teams, with both players hesitating whether to look for a goal or go for extra time. But for the umpteenth time in his career, Usmakabyle would extend his legend by scoring the winning goal in the last minute of the game. AS Monaco were crowned champions of the eFootball™ Championship Pro 2022. Usmakabyle finally won his first championship after three attempts, Nekza and GuiFera did it for the first time and the young Frenchman was no longer a promising player but the star of the moment after finishing top scorer of the tournament and receiving the MVP award in the year of his debut.

So ended the 2022 season of the world's biggest eFootball™ tournament. After a year and a half of waiting, AS Monaco were crowned champions of the eFootball™ Championship Pro 2022. It has been three weeks of the best esports football hosted by the brilliant presenter Semra Hunter with the estimable company of caster Harry Channon and commentator Stewart Westley "Wezza".

If you didn't get a chance to follow the final or any of the tournament matches and now want to do so, head over to the official eFootball™ YouTube and Facebook accounts. See you next year!