Get to know the most recent season’s players better, starting with their nationalities

Following Spain and Italy, France is the third highest represented country in eFootball.Pro. ALEX GRD, Lotfi, and Usmakabyle have participated in all three seasons of the competition. Kams10_ and Kilzyou were additions to their clubs in the following 2019-20 season. Impressively, in the most recent competition, Kilzyou and Lotfi walked away with two of the three individual awards of the season, with Kilzyou named Top Scorer and Lotfi crowned Top Assists Provider.

The two German natives in the league, EL_Matador and MeroMen, both represented their country playing for FC Schalke 04. This was their third season in a row competing for the title together, however they experienced more success in the most recent competition. Schalke was placed 10th in at the indefinite postponement and conclusion of the 2019-20 season, but managed to qualify for the Knockout Stage and place third in the tournament the following year.

Greece was showcased for the first time in the competition by two rookie players, Djibrilliant and StavAttack. The Greek players joined together to represent Galatasaray SK, alongside their teammates Mucahit21 and Kruji, in their debut season.

Italy is the second most represented country in the league. Of the six Italian competitors, only two were newcomers to the 2020-21 season, Gagliardo28 and umbee96_. They both played on behalf of Celtic FC with Gagliardo28 not making an appearance on the virtual pitch until Matchday 5. ETTORITO97, IL DISTRUTTORE44, and LoScandalo have all represented Juventus for the past two seasons, and S-Venom was the only non-Serbian player on AS Roma’s roster.

The three Dutch players have an extensive history in the league, with INDOMINATOR and E_C_Oneill being previous teammates for Celtic FC in the first season, as well as INDOJAWA having competed with his brother throughout most of his career. INDOMINATOR is also the only player in league history to also have experience as a pundit for the competition as well. 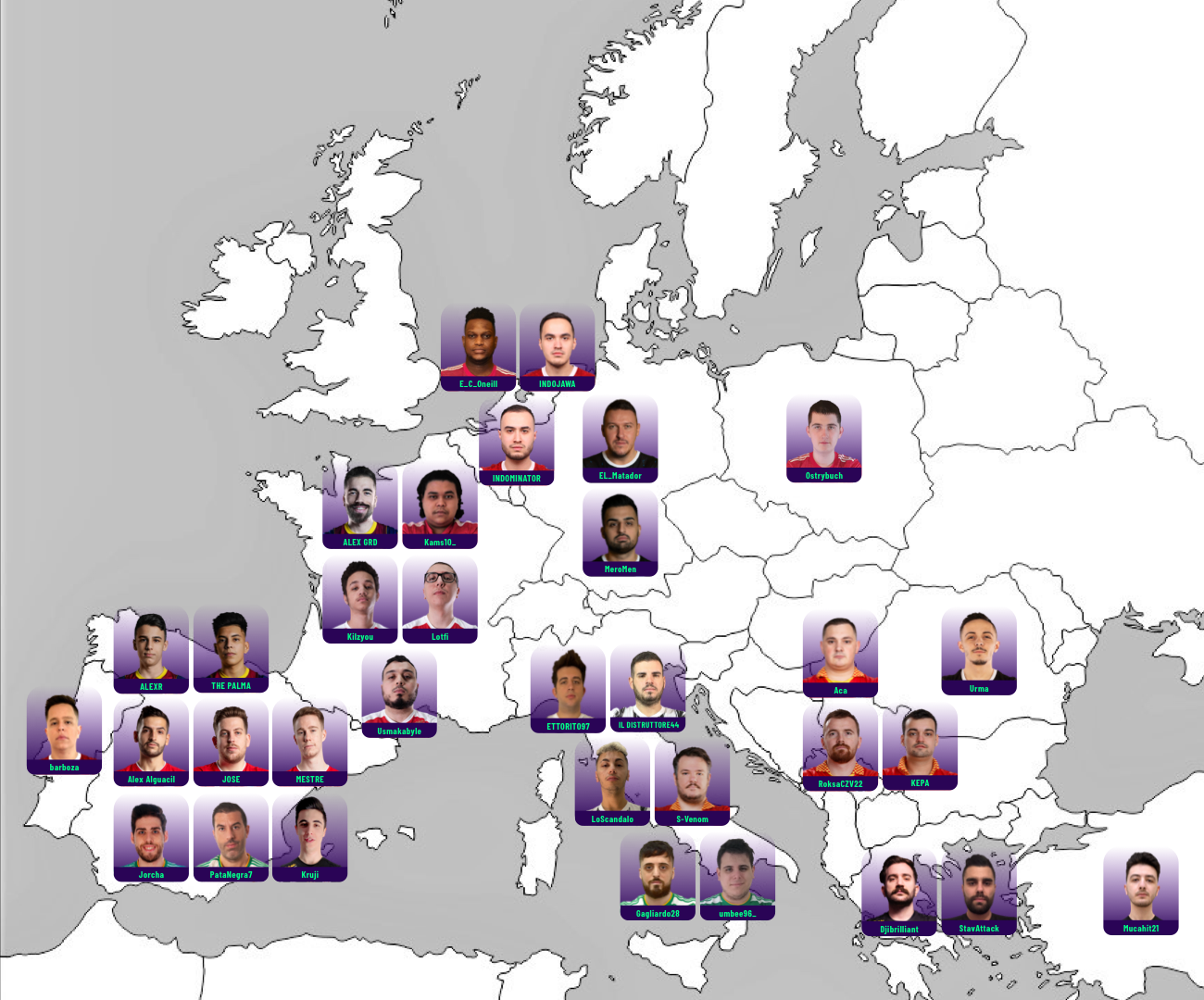 Not only is Ostrybuch the second youngest player in the league, but he is also the only player from his home country, Poland. The youngster represented Manchester United FC throughout the past two seasons.

After representing Boavista FC in the 2019-20 season alongside fellow Portuguese teammates, barboza was the only player in the most recent competition that was born in Portugal. He joined the ranks of Arsenal FC, alongside brothers INDOMINATOR and INDOJAWA, creating an entirely new roster for the Gunners this past season.

Urma was the sole Romanian competitor of the season, and the first representative of the country in league history. He joined two experienced FC Schalke 04 players, MeroMen and EL_Matador, to help secure the German club their eventual third place position. Commentators praised the addition of the Romanian player to the roster, noting the success he assisted in achieving for them.

Spain was the most represented country in eFootball.Pro throughout the 2020-21 season. Of the eight players born in Spain, three were rookie players in the most recent competition (ALEXR, PataNegra7, and Kruji). THE PALMA, JOSE, MESTRE, and Jorcha all returned for their second season in a row, and Alex Alguacil is the only Spanish player that has participated in all three seasons of the competition.

Mucahit21 is the first player from Turkey in the league’s history, and was the only player on his team, Galatasaray SK, to represent his home country. Although it was only his first season competing, he managed to make a name for himself and standout amongst his teammates and opponents by earning the Top Defensive Player award at the conclusion of the 2020-21 season, as well as the €30,000 prize that accompanied it.

AS Monaco, champions of the eFo...