The first matchday of Group A will be streamed live on the official eFootball™ YouTube channel at 13:00 CET next Saturday, June 11th. Sunday 12th at the same time will be the turn of Group B.

The eFootball™ Championship Pro 2022 season starts this weekend with two matchdays full of interesting match-ups. Saturday will be the day destined for Group A encounters and Sunday, for Group B. After the Group Stage Draw held last Saturday, all clubs have had one week to get ready, review their strategies and focus only on their rivals. No player will know who they will be playing against until the very start of the match, so it will be important to have a good strategy and to choose the right order in which the players will play. With such a short schedule, every point counts to pass on to the Knockout Stage. 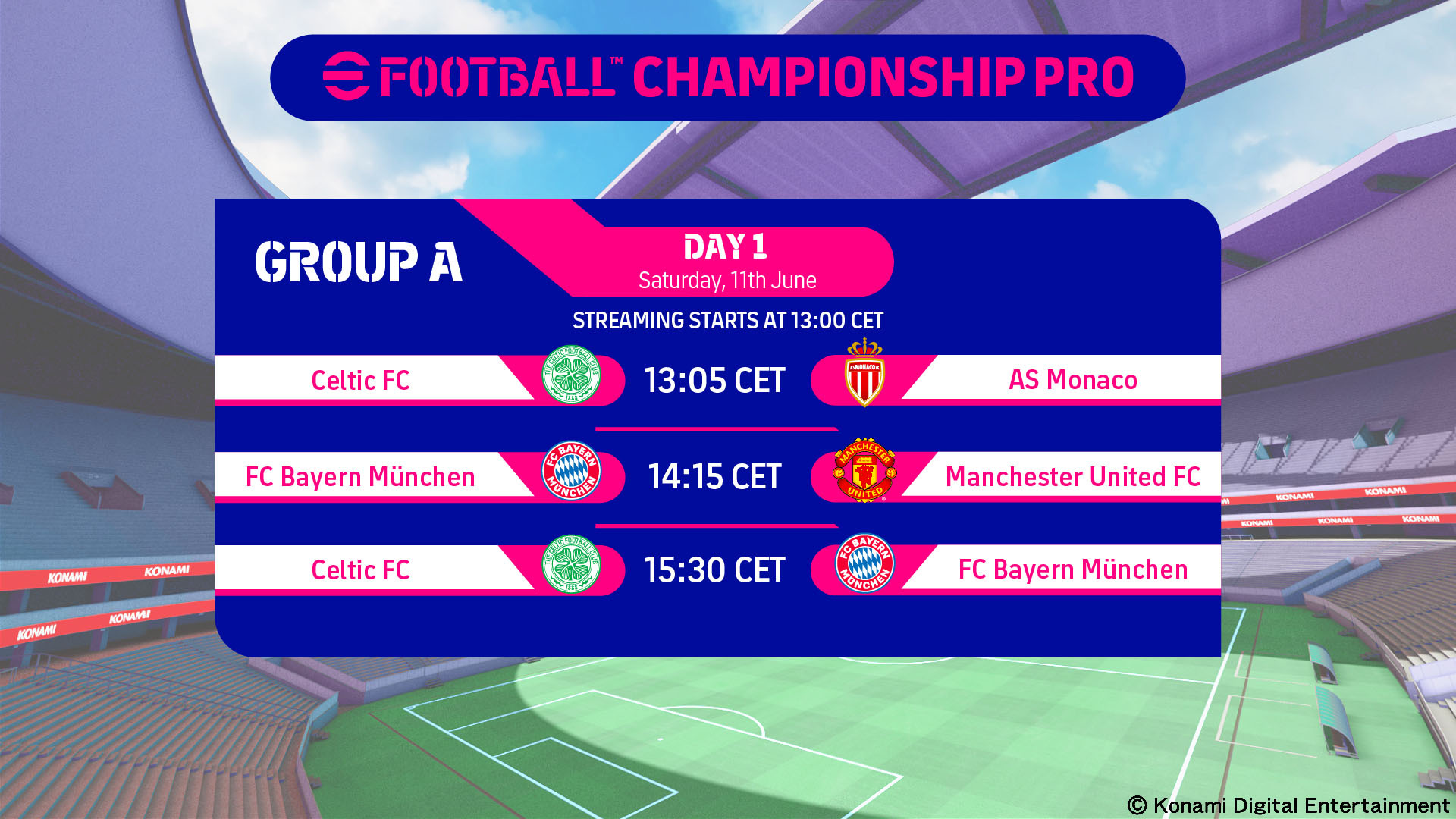 AS Monaco comes from a magnificent performance after being the runners-up of last season. This time they will only have Usmakabyle from their previous squad, as curiously his now former teammates Kilzyou and Lotfi will be facing him in a Celtic FC shirt. The Scottish team has strengthened its squad for the new year with two key players from last season. Kilzyou finished as the tournament's top scorer for the second consecutive season with 21 goals, while Lotfi was the tournament's top assistant. Added to these reinforcements is the signing of Frenchman Aazbabysk, an old acquaintance of the competition who played for FC Nantes in previous seasons. AS Monaco, on the other side, has not been left behind and has added two players to its squad who are sure to be talking about this season. The best known so far is undoubtedly the Brazilian GuiFera, with a track record of 5 e-Brasileirão Championships and two World Championships. He is arguably considered the best player in South America and, as his now teammate Usmakabyle said, "possibly the best player ever".The third player signed by AS Monaco for the upcoming matches is the promising young French player Nekza, who made a name for himself last year by participating in the eFootball Championship Open tournament.

Two historic giants of this competition face each other in their first step to make up for last season's disappointing results. Both have kept their esports players’ line-ups intact, with Spaniards FCB_Jose, FCB_Alguacil and FCB_Mestre for the Bavarian club and Red Devils' E_C_Oneill, Kams10_ and Otrybuch as the main players. Bayern, the 2020 champions, will try to reclaim the title after losing in the group stage last season. Manchester United will be looking to do the same after crashing out of the knockout phase. Both are hungry enough to win it all, but can they do it?

This will be the second match that both teams will play on the same day. The German team will have just played their game against Manchester United, so the short time between the two matches could take their toll. Celtic FC, on the other hand, will have had a match in between to recover their strength and prepare for their second match, so it seems that they could arrive more refreshed and start the match in better shape. We'll see what a key game has in store for both teams, as a second defeat of the day could see them drop to the bottom of the table and cut short their aspirations. Fortunately, there are 9 points at stake in every match and that leaves room to make up the difference with the rivals. 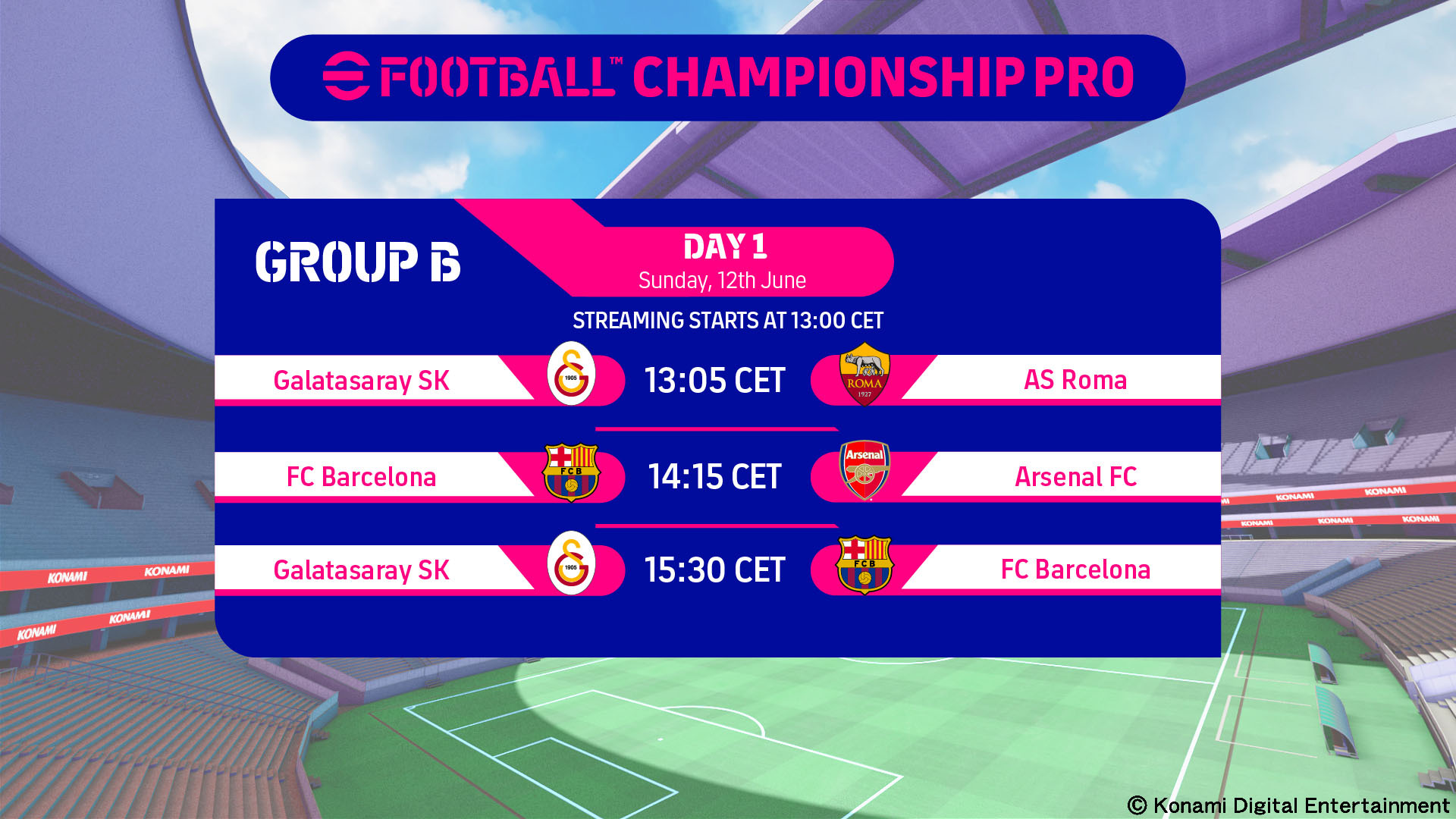 The Turks against the Romans. A confrontation that we have already seen several times throughout History and that maybe this time will become a historical event again with this match. Both teams return to this new eFootball™ Championship Pro season with two very different squads. From Galtasaray, only Mucahit21 remains from last year, but the team has been reinforced with two new Serbian additions, the rookie of the competition Djole and the former Roma player Kepa_PFC, recent eEuro21 champion. In the other half of the pitch, a renewed AS Roma will be waiting for them. The Giallorossi will be captained by Romanian ASR_Urma43 alongside Italian players Gagliardo28, who played last season for Celtic FC, and ASR_STIFFLER, who is making his debut in the competition after playing last year for Italian Serie B club Spal.

FC Barcelona is looking to make amends for last year's performance by qualifying for the Group Stage. The culés return for the fourth consecutive year with their former players THE PALMA, winner of an MVP award and Best Goal in the same matchday last season, and ALEXR, the youngest player in the competition who last year made his debut by winning the Best Goal of the day with his first official goal in an eFootball™ match. This promising pair has been joined by a veteran and eEuro21 champion, the Serbian ROKSA. Against the Blaugrana team, Arsenal FC has signed another veteran this year, S-Venom, ROKSA's former teammate at AS Roma, who will share the club with last year's Arsenal players, INDOMINATOR and Barboza. The Gunners are looking for goals and points with this promising lineup.

As mentioned before, the second consecutive match of any club can be decisive to maintain their chances of qualifying for the Knockout Stage. The Turks will have been able to rest between games, but the blaugrana players will need to regain their strength as soon as they can to stay solid against a Galatasaray squad that will surely fight hard for the win. There are a lot of points at stake, but they will still have one more match to play after this encounter, which, as it is always said, will hopefully be won by whoever plays the game better.

Nothing else is needed to enjoy a weekend full of eFootball™. Next Saturday, June 11th, the tournament kick-off at 13:00 CET will be streamed live worldwide on the official eFootball Youtube and Facebook channels. The event will be conducted by Semra Hunter, alongside commentators Harry Channon and Stewart Westley “Wezza”.

Remember that every fan can win 500 eFootball™ points just by entering the streaming from within the game and that clubs will give away items and merchandise for every game won by their squads. Stay tuned to their social media accounts.