The Quarterfinals and Semifinals will be streamed on the official eFootball™ YouTube and Facebook channels on Saturday from 13:00 CET. On Sunday, the 3rd/4th place match and the grand final will bring the competition to a close.

The eFootball™ Championship Pro 2022 season comes to an end with the final two matchdays in the Knockout Stage. After an exciting Group Stage full of great eFootball, only six teams have qualified for the Knockout stage, leaving Manchester United and Arsenal FC out. In Group A, FC Bayern München knocked the Red Devils out of third place and qualification in the last game thanks to FCB_Mestre's victory over GuiFera, from an AS Monaco side that had previously qualified as group runners-up. The Germans will face FC Barcelona in the Quarterfinals, who hold a high goal tally thanks to THE PALMA and ROKSA, while the Monegasques will go to the other side of the chart in the Quarterfinals against Galatasaray SK. Celtic FC and AS Roma will be waiting in the Semifinals having topped their group. The Scots will face the winner of the Quarterfinal between the Catalans and Bavarians and the Romans will face either the Monegasques or the Turks.

The Knockout phase will have one difference compared to the Group Stage. In order to force tie-breakers to decide who will advance to the next round, the KO phase matches will be played in a best-of-3 format, with no games being tied. Therefore, in the event of a draw at the end of 90 minutes, there will be an extra time of two halves and if the tie persists, a penalty shoot-out will decide the winner. In addition, if a club wins two games in a row, it would not be necessary to play the third game, so that one player from each club would not play in that play-off match. This makes it even more decisive for each club to choose the order in which the players will line up for the matches, as that order is communicated 48 hours before the match and kept confidential until the start of each game. 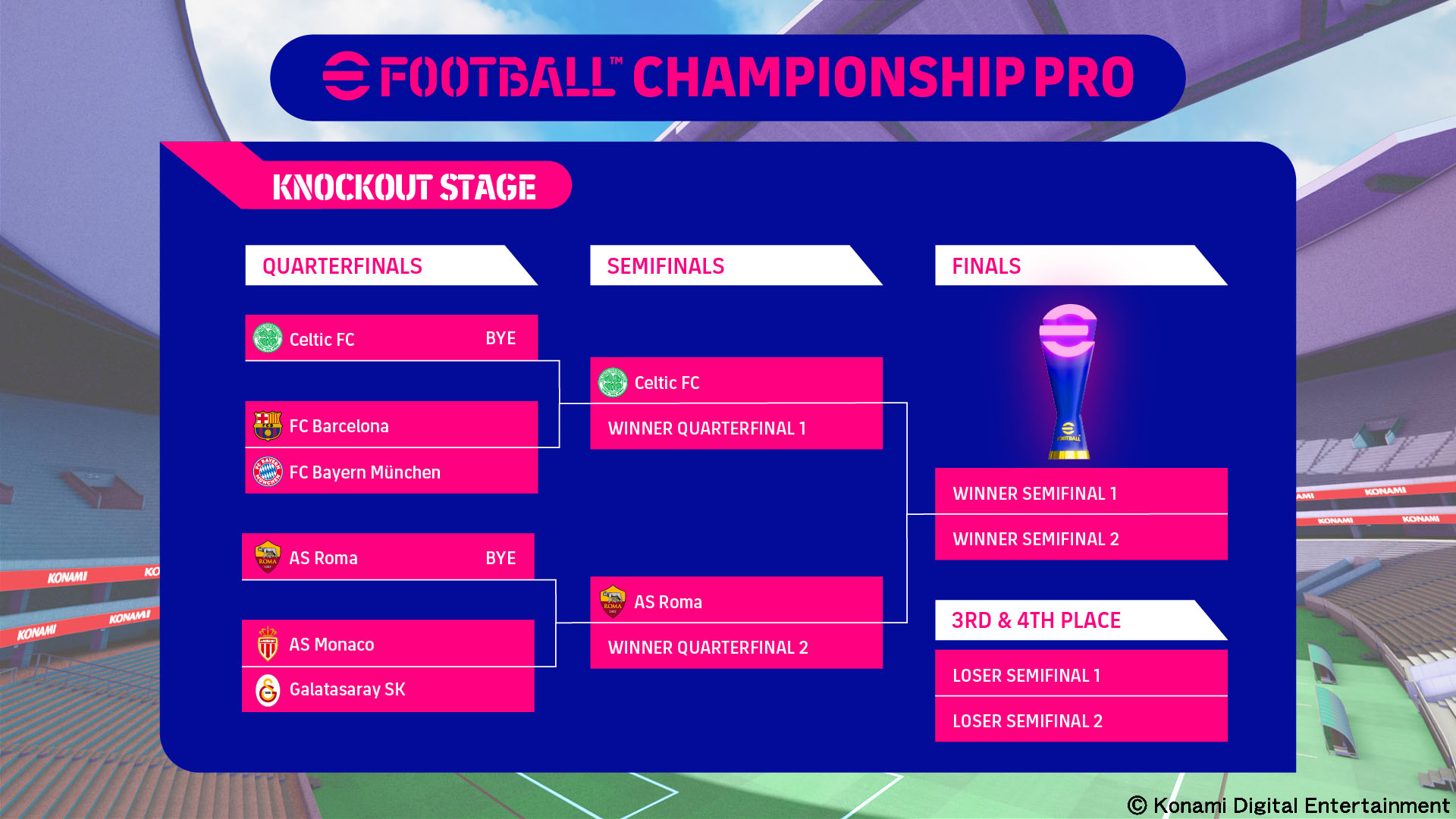 "A mammoth clash" as commentator Harry Channon said last weekend. FC Bayern München with the Spaniards FCB_Jose, FCB_Alguacil and FCB_Mestre managed to reach the knockout phase in the last game against AS Monaco. The Germans come from a lukewarm Group Stage compensated by the great performance of FCB_Mestre who has already scored 9 goals and is second in the scoring charts tied with their Quarterfinals rival ROKSA, awarded the Best Goal of Day 1. The Serbian, FC Barcelona's new signing for this season, is showing clear signs of being a European champion, but he is not the only star the Bavarians will have to face next Saturday. Up against them will be the talented youngster ALEXR, who has yet to break through in the tournament, and the competition's current top scorer, THE PALMA. The match looks set to be a tight affair for a place in the semi-finals. 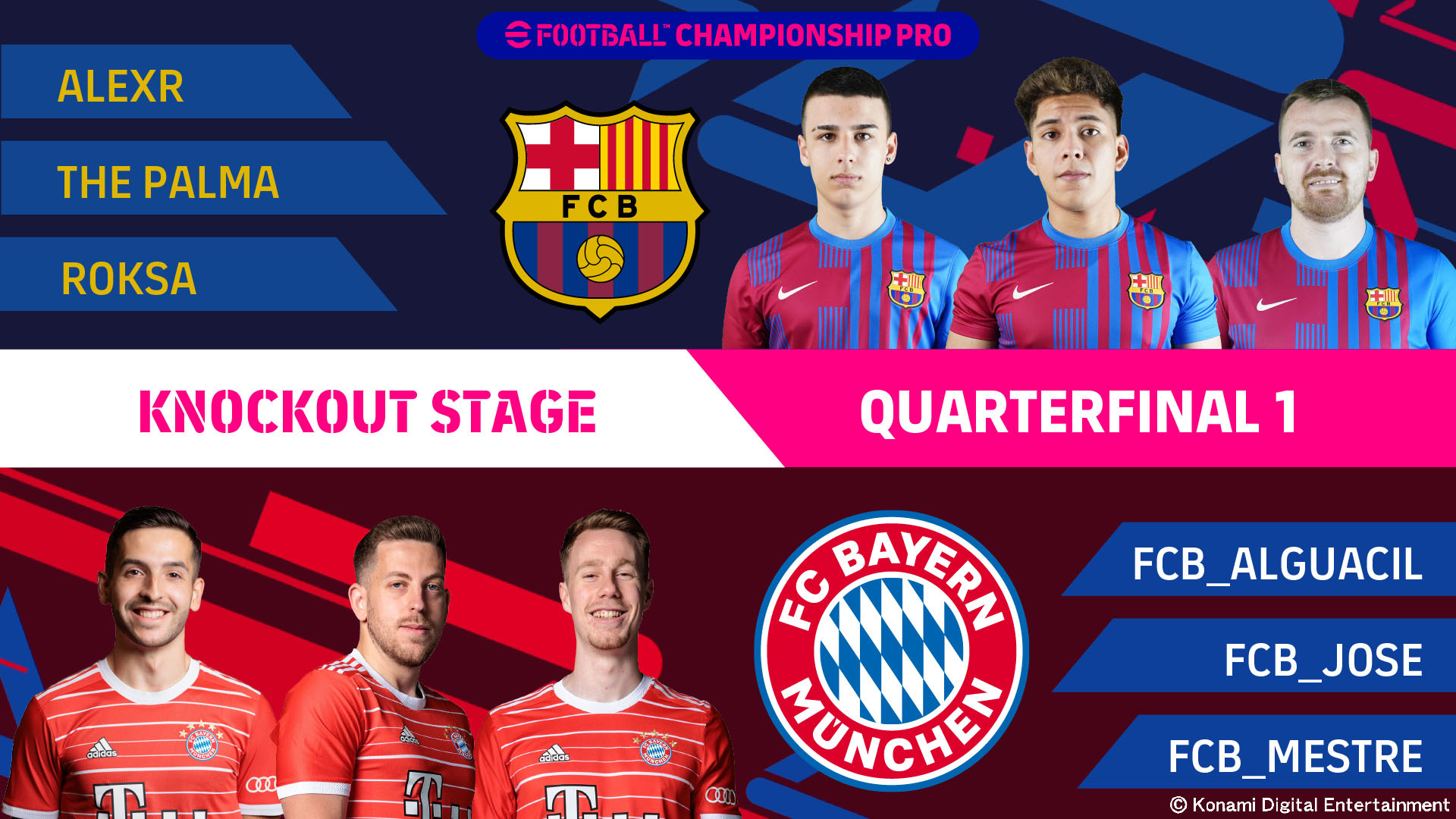 On the other side of the bracket we find an evenly matched AS Monaco against Galatasaray SK. The Monegasques, theoretically favorites due to the reputation of their players, started the competition with a setback against Celtic FC, but on the second day of the Group Stage they recovered and managed to get through as runners-up thanks to the great performance of debutant Nekza, who is being the revelation of the tournament. Two champions like Usmakabyle and Guifera have yet to play their best football, so if they do, they could put Galtasaray SK in serious trouble. The Turks, led by an outstanding Mucahit21, did not score many points on the first day, but held their own on the second weekend thanks to victories by European champion Kepa_PFC and Serbian debutant Djole. A quarterfinal where anything can happen and where the place in the semifinals will not be cheap. 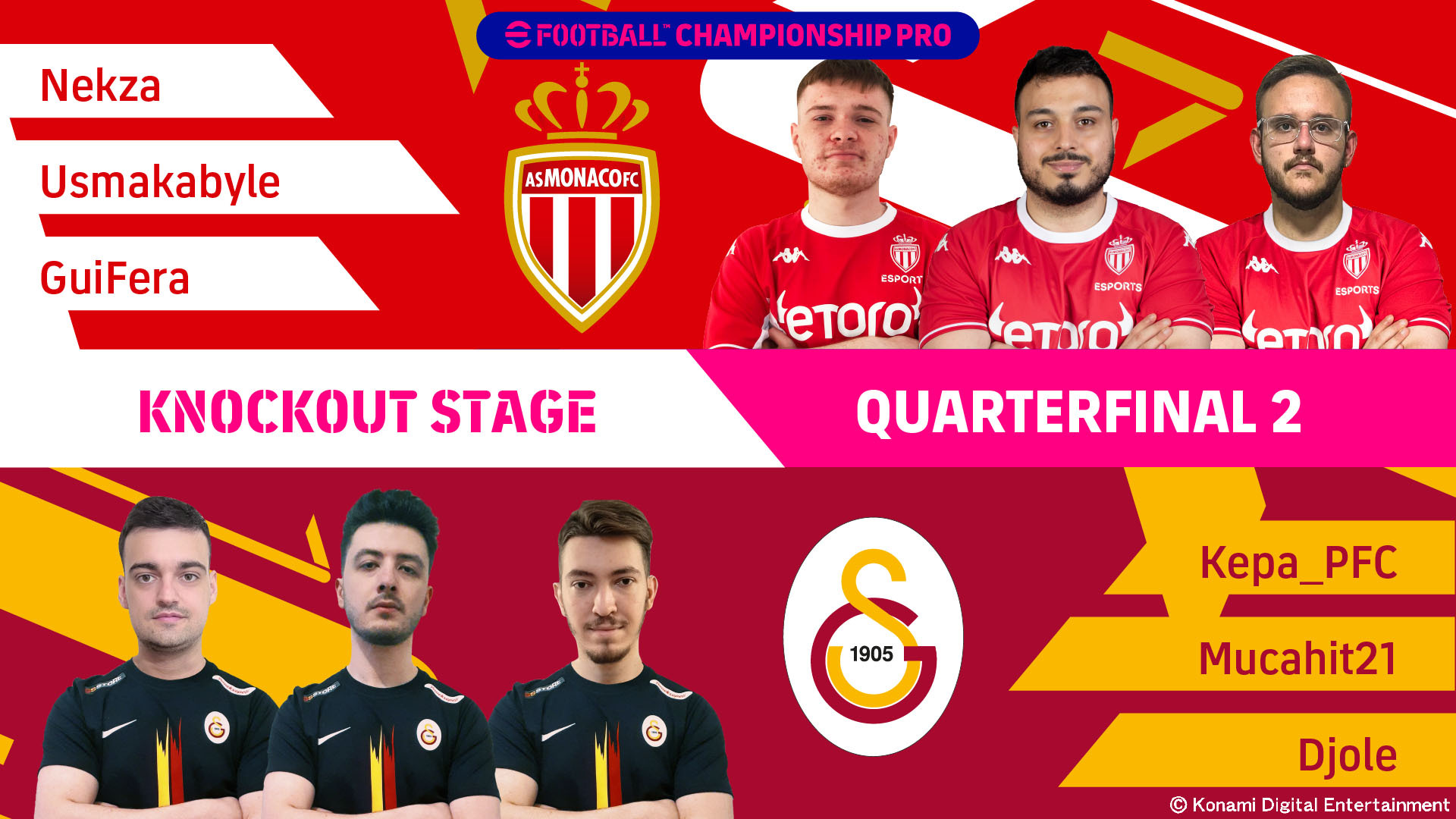 The Scots are eagerly awaiting their opponent in the Semifinals after unexpectedly topping Group A, considered the Group of Death. The green and white club has proven to be a consistent team made up of great players such as the veteran and winner of the Best Goal award on matchday 1 Lotfi, the still unbeaten Aazbabysk and the conceded Best Player of the Group Stage, Kilzyou. Celtic FC will face the winner of the quarter-final between FC Barcelona and FC Bayern München. They have not yet met the Culers this season, but they have already faced the Bavarians in their group with two victories for the Scots, Kilzyou over FCB_Jose and Aazbabysk over FCB_Alguacil, and one for the Germans, FCB_Mestre over Lotfi. Whether it is the Catalans or the Bavarians, the semifinal is a hotly anticipated battle for first place in Sunday's final. 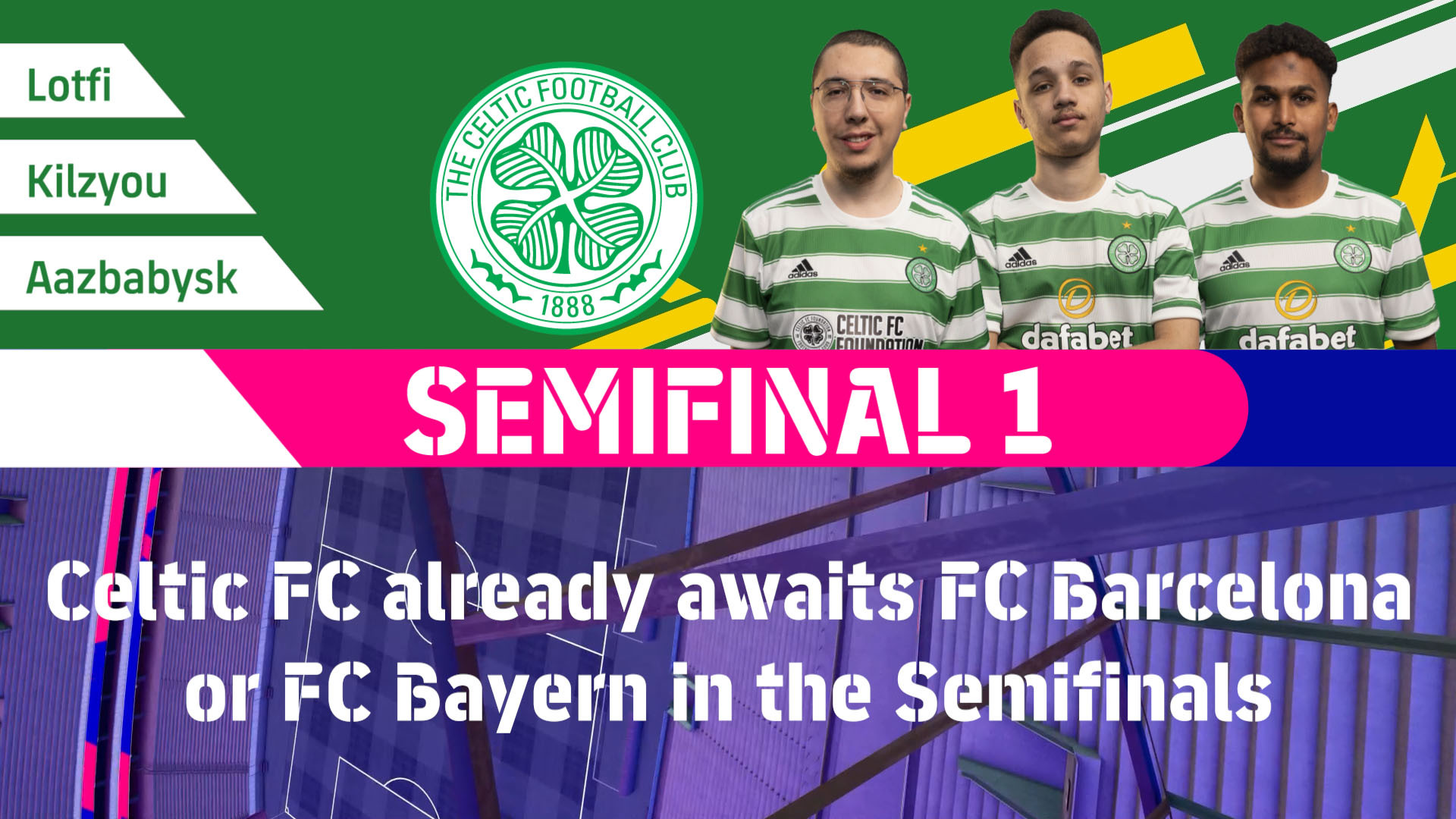 AS ROMA - WINNER QUARTERFINAL 2 (Hour: After Quarterfinals have ended)

AS Roma demonstrated their strength in both attack and defense over the last two matchdays. The Italian side will await their Semifinal opponent after finishing top of their group with a squad featuring breakout player ASR_STIFFLER, the always tough Gagliardo28 and the Roman captain, voted Best Player in their group, ASR_URMA43. The latter secured his team's place in the Semifinals with a great last minute goal against THE PALMA, which elevated him to fifth place in the scoring charts with 8 goals. Up against them will be the winner between AS Monaco and Galatasaray SK. AS Roma haven't yet had the chance to face the Monegasques, while the first Group B match between Romans and Turks resulted in two wins for the Italians, by ASR_STIFFLER over Djole and ASR_URMA over Kepa_PFC, and one Turkish victory, that of captain Mucahit21 over Gagliardo28. Whoever the Romans' opponent is, they won't have it easy against a squad that scares for its good numbers. 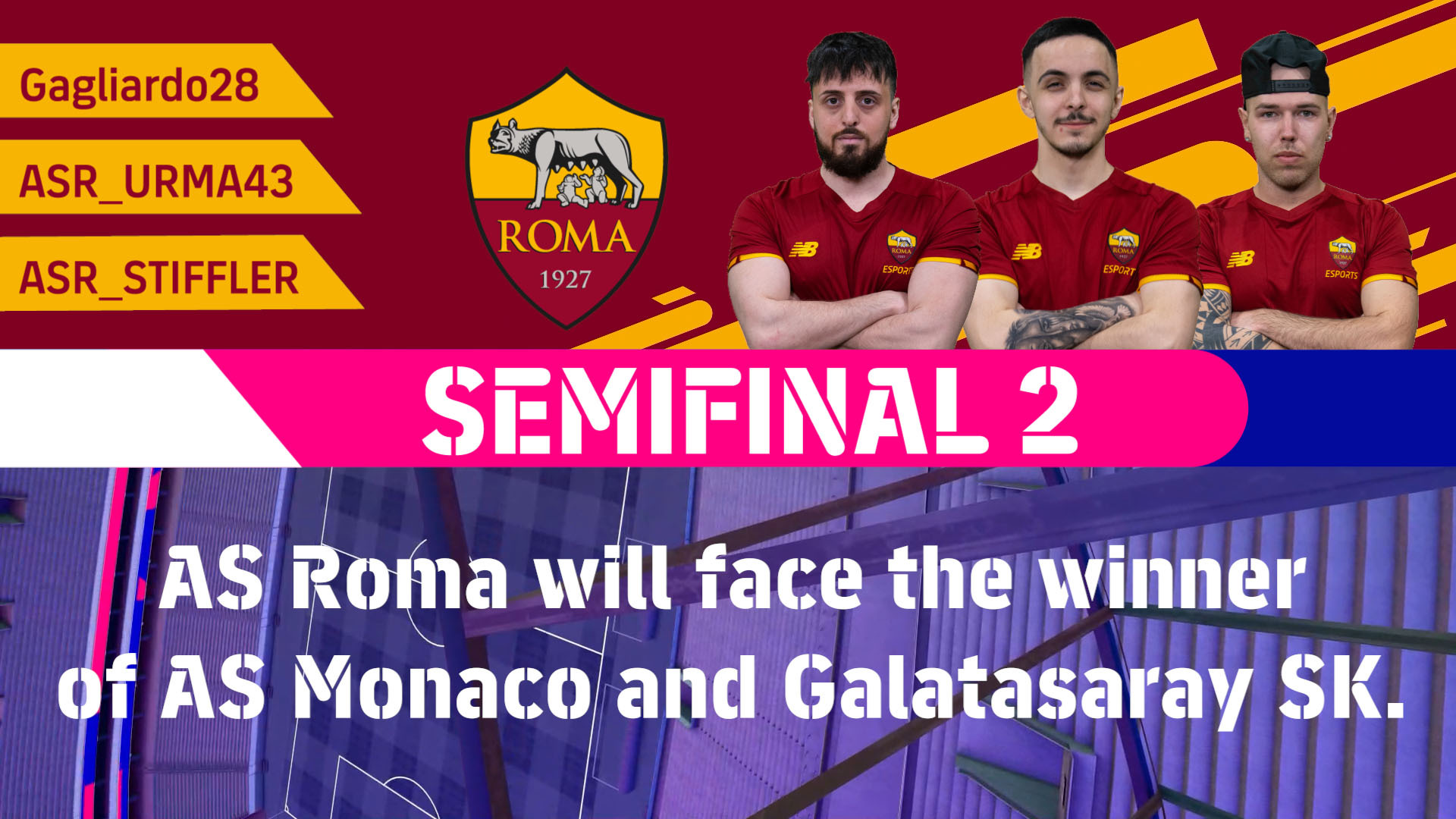 After three weeks of championship, 17 matches and 6 teams eliminated, only 2 clubs will reach the grand final on Sunday 26th to be crowned champions of the tournament with the best professional players in the world, the eFootball™ Championship Pro 2022. The winner between Celtic FC and FC Barcelona or FC Bayern München will face the winner between AS Roma and AS Monaco or Galatasaray SK.

The scenario is set for one final heart-stopping match, but who will be the winner? We will find out on Sunday, June 26th, from around 14:15 CET, in a live program conducted by Semra Hunter, alongside commentators Harry Channon and Stewart Westley “Wezza” and broadcasted worldwide on the official eFootball™ Youtube and Facebook channels.

Remember that every fan can win 500 eFootball™ points just by entering the streaming from within the game and that clubs will give away items and merchandise for every game won by their squads. Stay tuned to their social media accounts!