Where are this season’s eFootball.Pro players from?

An analysis of the 2019-2020 eFootball.Pro players based on nationality

Every matchday, the eFootball.Pro players travel to Barcelona to compete for the championship title. The league started last season with six football clubs, and has continued to expand its reach across Europe. In the 2019-2020 season, there are now ten professional clubs from all over the continent fighting for this first place position: FC Barcelona, Manchester United FC, FC Bayern München, Juventus, Arsenal FC, Celtic FC, AS Monaco, FC Schalke 04, Boavista FC, and FC Nantes. While these players are usually analyzed based on their team affiliation, take a look at where each competitor in the league is coming from. 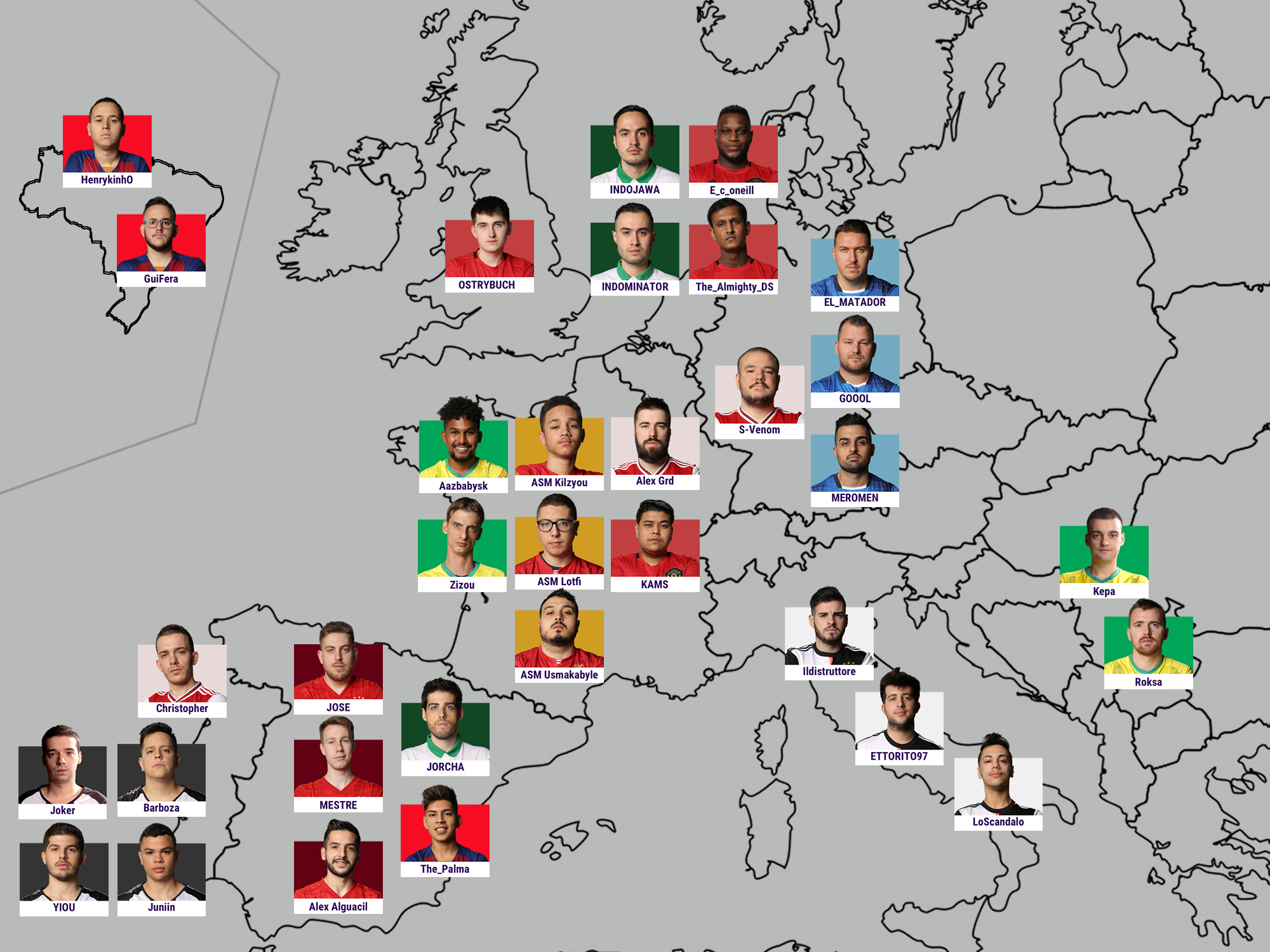 Of the thirty three total players participating in the league, there are only two players from Brazil, both representing FC Barcelona. GuiFera and HenrykinhO are both first time competitors in the eFootball.Pro league, with HenrykinhO being one of the first four MVPs awarded this season. Both Brazilian players are well known in the eFootball.Pro community, and have contributed to keeping FC Barcelona within Knockout Stage contention as they head towards the second half of the Regular Season.

With France being represented in almost half of the teams in the league, players from this country make up over one fifth of the entire competition. KAMS, a first timer in the league for Manchester United FC, and Alex Grd with Arsenal FC, are the two French competitors playing for English teams this season. For clubs from the French league, Zizou and Aazbabysk are signed by FC Nantes, and league leading AS Monaco is made up of ASM Lotfi, ASM Kilzyou, and ASM Usmakabyle. While making up just over 20% of the league, 27% of assists and almost 30% of the goals scored were by a French player. Within this group of players, they have won two MVP awards (ASM Kilzyou & ASM Usmakabyle) and one award for best goal (Alex Grd).

Germany is represented within two different teams, by first time competitor S-Venom, who is a dual citizen of Germany and Italy, playing for Arsenal FC, and veteran players EL_MATADOR, GOOOL, and MEROMEN for FC Schalke 04. All four of the German players are ranked within the top six spots in the league for defensive positioning, with all players above the 3,000 point threshold. Making his PES experience and skill level clear, EL_MATADOR currently leads the entire eFootball.Pro league in this area with 3,105 defensive positioning points.

Italian players make up less than 10% of the entire league, with only three players in the competition. ETTORITO97, Ildistruttore, and LoScandalo, all represent their home country of Italy playing for Juventus. While this is LoScandalo’s first experience playing in the eFootball.Pro league, all three players have competed in PES League as well, with ETTORITO97 and Ildistruttore winning the championship title together in 2018. ETTORITO97 was the champion of the 1v1 competition that year as well, and has proven his expertise in this game by being awarded MVP of the second matchday of the 2019-2020 eFootball.Pro season. He is also ranked as best in proactive defense, with 6,017 points. The skill and talented gameplay of these Italian players has earned them the third place position as they head into the second half of the Regular Season.

Dutch representation is split between Manchester United FC’s E_c_oneill and The_Almighty_DS, and Celtic FC with brothers INDOJAWA and INDOMINATOR. E_c_oneill and INDOMINATOR were teammates, playing together last season where they made it to the Finals while representing Celtic FC, and are now competing against one another. The two players faced each other during Matchday 3, which resulted in one tie, and one victory for Celtic FC. INDOMINATOR leads the league in passes, at 566, with his brother, INDOJAWA, performing closely in fourth place with 409.

Being within the top three countries represented in the 2019-2020 season, there are currently five Portuguese players in this year’s competition. As a dual citizen of Portugal and France, Christopher was a member of Boavista FC last season before signing with Arsenal FC. He has extensive experience in PES, being the first champion of PES League a decade ago in 2010. The other four players, Barboza, Joker, Juniin, and YIOU, are all first time participants in the eFootball.Pro league, and all represent their home country playing for Boavista FC. The Portuguese team’s captain, Barboza, is currently ranked as the best defensive player with 8,787 points, while 85% of the league has yet to reach 8,000 at this point in the Regular Season.

Roksa and Kepa are the only two players from Serbia in the eFootball.Pro league. Both playing for FC Nantes this season, they make up 50% of their current team, but only 6% of the entire competition. This is the first season for the Serbian players, but the two took part in PES League together prior to joining the eFootball.Pro competition. Kepa was recognized with the award for best goal of Matchday 3, and also is ranked first in the league for vital passes. Roska and Kepa have helped keep FC Nantes within Knockout Stage contention, and must continue to perform at this level to defend their team’s position.

Tied with Portugal for being the second most represented country in the league, five of the thirty three eFootball.Pro players were born in Spain. The_Palma, Alex Alguacil, JOSE, MESTRE, and JORCHA make up this 15%, with The_Palma being the only one to represent his home country playing for FC Barcelona. JORCHA plays for Celtic FC, and is responsible for over 50% of the goals scored by his entire team throughout the first half of the Regular Season. The other Spanish players make up the entirety of FC Bayern München, which is currently ranked at second in the league. The Spanish representatives of FC Barcelona and FC Bayern München are currently positioned to qualify for the Knockout Stage with their teams.

Being both the youngest player in the league, born in 2003, and the only member from the UK, OSTRYBUCH has also managed to stand out for his impressive gameplay while representing Manchester United FC. He was presented the award for best goal following the conclusion of the first matchday of the season. Competing amongst older and more experienced players, OSTRYBUCH has been able to showcase his skill at PES during his first season of eFootball.Pro.