A preview of the matchups of the eFootball.Pro Cup Group Stage: Day 2

A closer look the elite eFootball.Pro clubs and their opponents set to compete against each other on July 24th

Following the first day of competition amongst eFootball.Pro clubs in the Group Stage of the eFootball.Pro Cup, the games resulted in an exciting display of PES skills, dramatic shutout results, and with almost all teams still in Knockout Stage contention. FC Bayern München, Juventus, and Manchester United FC were the standout teams with undefeated records at the conclusion of Day 1. FC Barcelona is also currently ranked to qualify for advancement, but only the results of Day 2 will solidify the clubs’ spots in the Knockout Stage. Boavista FC is the one team that doesn’t have the chance of a playoff run going into the second day of the cup. 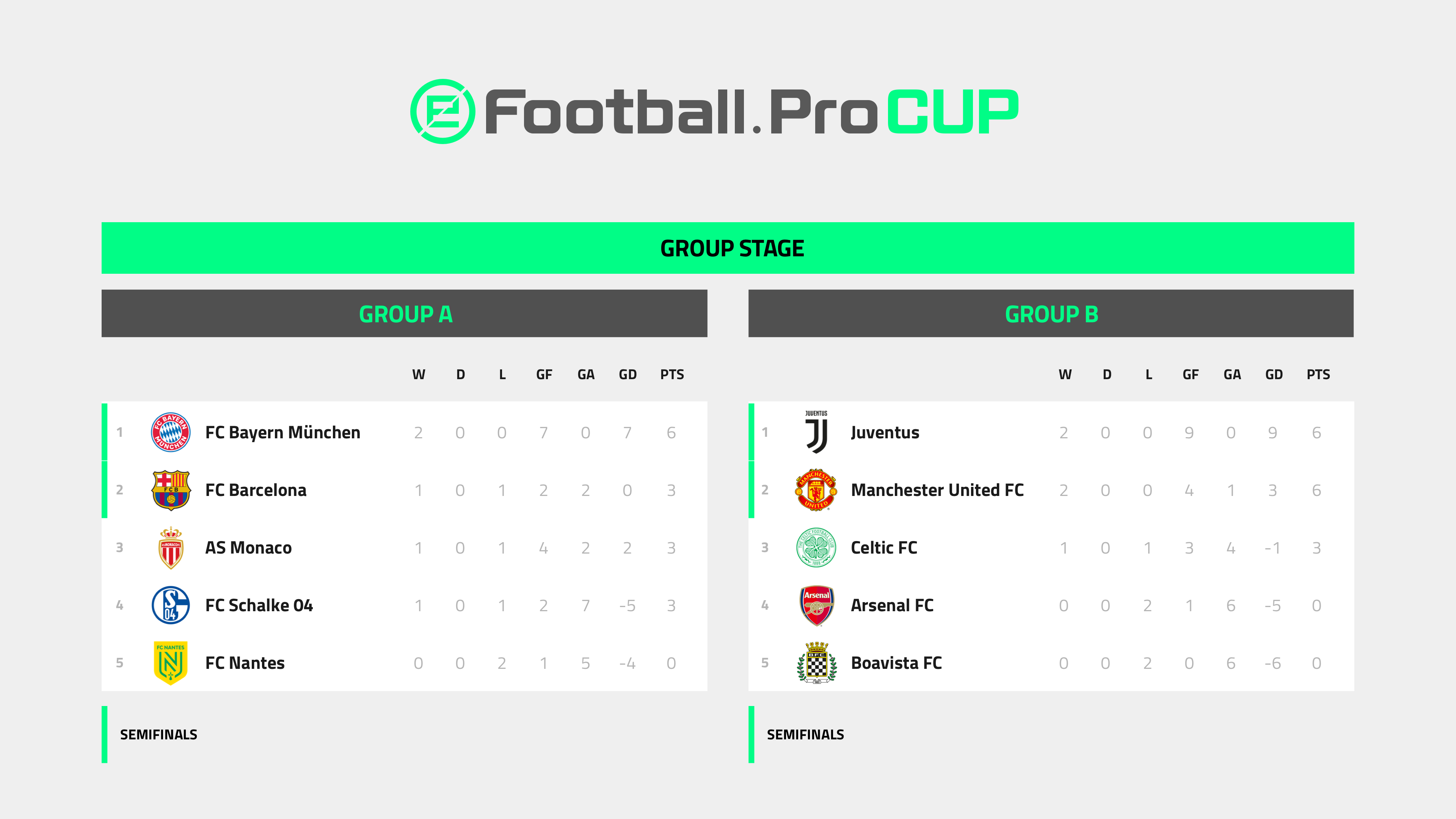 The first set of teams scheduled to face each other on the second day of the eFootball.Pro Cup Group Stage are AS Monaco and FC Schalke 04. The two teams ended the 2019-2020 season on opposite ends of the league table, with AS Monaco in first and FC Schalke 04 in the last place position. The German Monegasque pair wasn’t slated to compete until the now cancelled Matchday 9 of eFootball.Pro. While team standings and player statistics may lead fans to assume the outcome of this match, AS Monaco has recently shown that they aren’t untouchable, and both teams have one win and one loss from Day 1. Next, FC Barcelona will play FC Nantes. The Blaugrana team is currently positioned to advance to the Knockout Stage, while FC Nantes was the only team unable to secure a win in the first day of the competition.

The third game is a highly anticipated matchup between AS Monaco and FC Bayern München, who had been scheduled to battle for the first place position in Matchday 6 of eFootball.Pro, which was unable to be played. This faceoff will be the chance for eFootball.Pro fans to speculate how the competition may have gone in the Regular Season. FC Bayern München was dangerously close to causing an upset in the league table and taking over AS Monaco’s coveted first place position, as the teams were only one point apart in the rankings. The German club currently holds the first position in Group A, following their undefeated performance Day 1 of the Group Stage. This game will be the Monegasque squad’s best chance at reestablishing themselves as champions, and advancing themselves to the Knockout Stage.

FC Schalke 04 and FC Barcelona will be the fourth matchup of the day, after also competing against each other in Matchday 4, where the German club tied one game, and lost the second, against the Blaugrana team. Under FC Bayern München, Barcelona is the second team currently positioned to advance to the Knockout Stage. In the final game for Group A, FC Bayern München will play FC Nantes. The two teams ended Day 1 on opposite ends of the rankings, with Bayern finishing the round undefeated, and Nantes unable to gain any points by the end of the day. The German club’s captain, JOSE, was also awarded both MVP and best goal of Day 1, posing the team as skilled competitors moving forward. 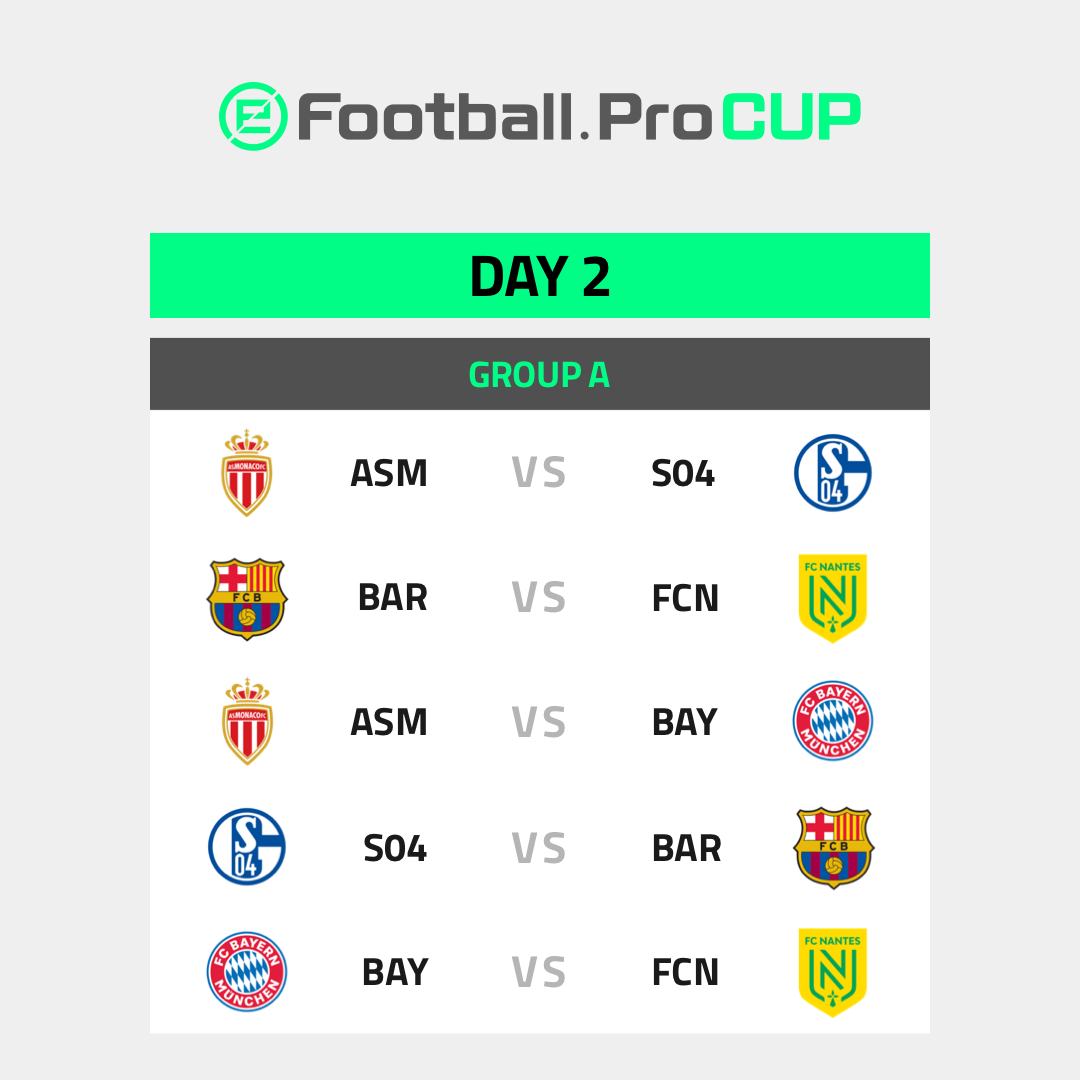 Celtic FC and Juventus are the first two teams scheduled to face each other in Day 2 of the eFootball.Pro Cup. Juventus emerged as the dominant team of the first day, following two wins without conceding a single goal to either of their opponents. The Scottish team was able to finish the first day with three points, but will have to display exceptional skill to stop the momentum of the Italian squad. The second game will be an English matchup, between Manchester United FC and Arsenal FC. While Manchester United FC landed in the ninth place position as the eFootball.Pro league table was finalized, they have proven themselves as a tough team to beat, as they ended the first day of the competition undefeated.

Celtic FC and Boavista FC are set to be the third game of the day, with Boavista ending Day 1 last in the rankings, now out of contention to advance to the Knockout Stage, and Celtic in third, after taking home three points at the conclusion of the day. This game will be the Scottish club’s chance to move up into one of the coveted top two positions in order to move forward into the Knockout Stage, which will feature the top two teams from both Group A and Group B. One of the most anticipated games from Day 2 is set to be between Juventus and Manchester United FC, the two teams that have emerged as the top competitors from Group B in the eFootball.Pro Cup. Each team had one of their players recognized with an award from the competition, ETTORITO97 as the Most Valuable Player and OSTRYBUCH with the best goal. Both teams managed to leave Day 1 undefeated, landing Juventus in first with their impressive nine goals scored and zero goals conceded. If both teams manage to keep their positions, this game will determine which team will face the first place team from Group A, and who will face the second.

The final game of the Group Stage will see Boavista FC compete against Arsenal FC. These two teams make up the bottom two spots in the rankings following the first day of the competition, after their performances resulted in zero wins. Throughout both games during the first day, Boavista was unable to score a single goal, and Arsenal managed a one successful shot when facing Celtic FC. In the Regular Season of eFootball.Pro, Boavista was ranked fifth out of the ten teams, two points above their competition who was in seventh place when the season was finalized. This matchup will be the Portuguese team’s chance to prove if their placement above the English squad in the league table was an accurate representation of their skill, as the two teams did not have the opportunity to face each other as scheduled in the now cancelled Matchday 6. 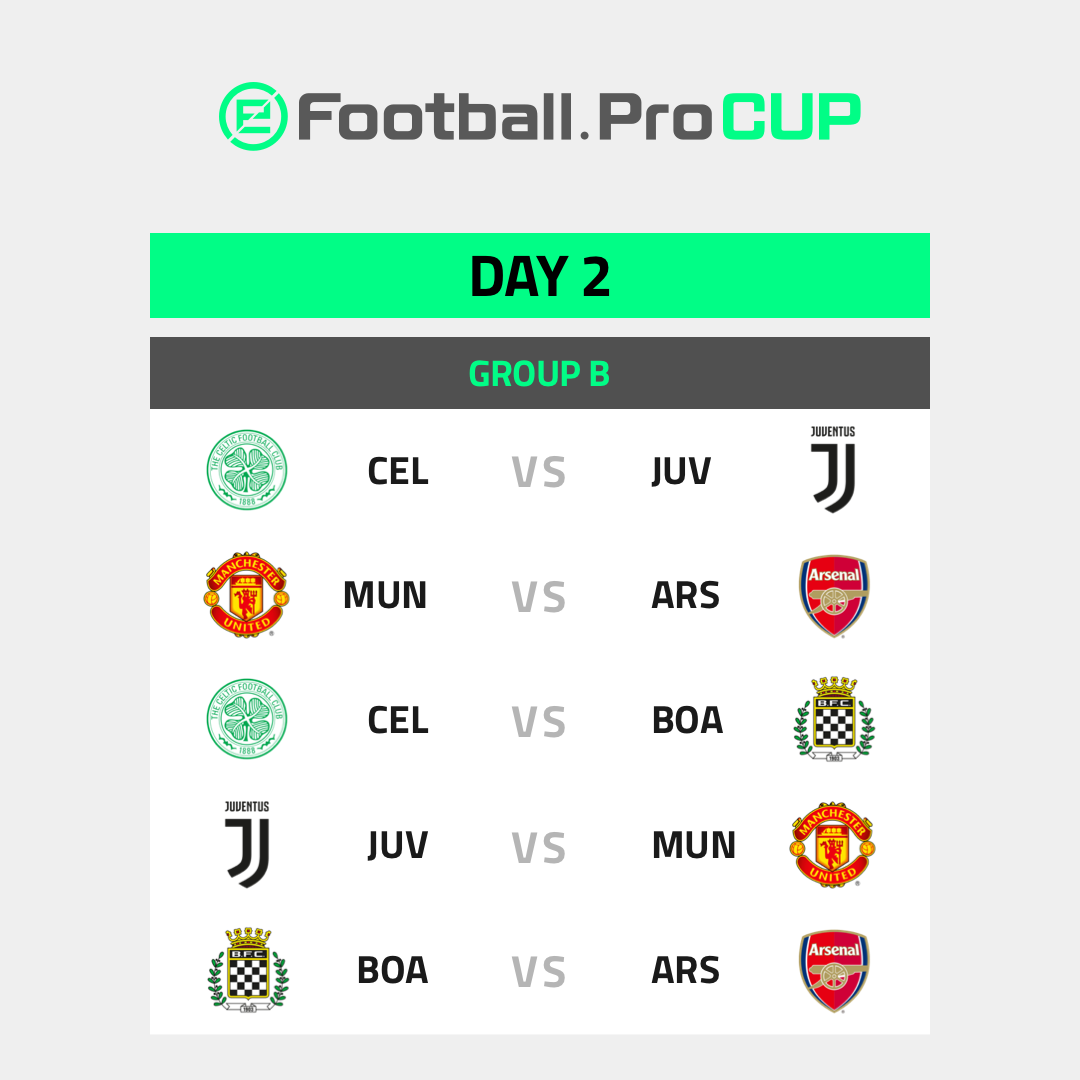