A preview of the matchups of the eFootball.Pro Cup Group Stage: Day 1

A closer look the elite eFootball.Pro clubs and their opponents set to compete against each other on July 18th

The eFootball.Pro Cup (Group Stage Day 1: Saturday, July 18th 14:00h CEST) takes place following the announcement of the cancellation of the remaining eFootball.Pro matchdays. While the rankings following the fifth matchday are the final places for teams in the Regular Season, the upcoming competition gives teams a clean slate and the opportunity to either defend their high ranking position, or perform more successfully than they did in the previous matchdays. The ten elite clubs of eFootball.Pro have been randomly placed into two groups, Group A and Group B, where they will compete to place in the top two teams of their group and advance to the Knockout Stage of the eFootball.Pro Cup. Some teams will face competition they already have in the 2019-2020 eFootball.Pro season, and others have yet to see how this PES skills compare to their opponents. 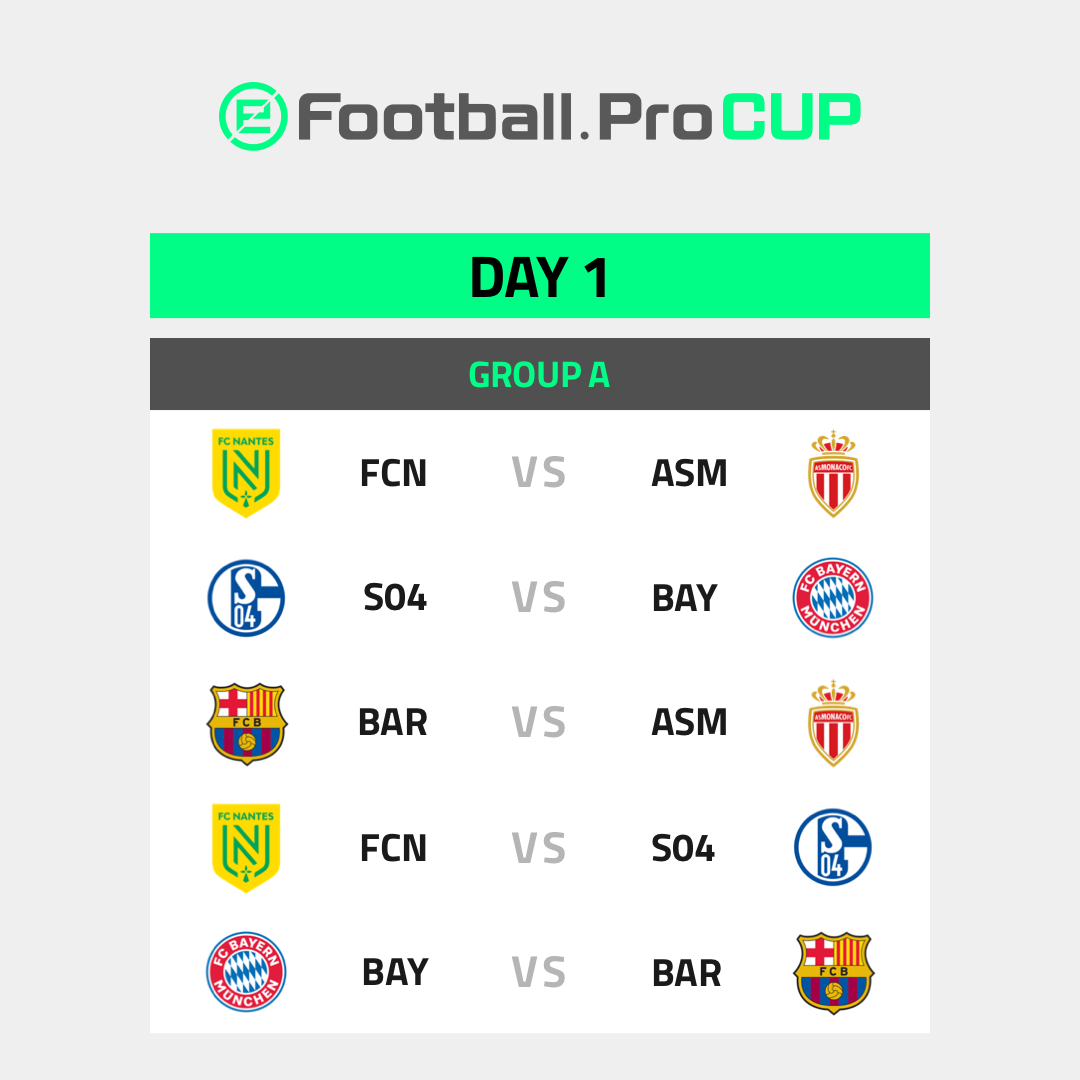 Group A:
Group A includes AS Monaco, champions of the first season who ended the 2019-2020 season ranked in the first place position. They will face FC Nantes in the first game, kicking off the eFootball.Pro Cup. The Monegasque squad has already faced their French competition in Matchday 3 of the Regular Season, where they dominated winning both games by a score of 3-1, taking all six points for their overall total guarding the first place ranking. The second matchup of the day will be between FC Schalke 04 and FC Bayern München, almost separated by the entire league table at the end of the Regular Season with Schalke placing last, and Bayern placing only one point away from the coveted first place position. While FC Schalke 04 lost both games, they only allowed two goals throughout both games. With the advantage of potentially understanding Bayern’s gameplay more clearly, this competition will give Schalke a shot at redemption and not mirroring their performance in the Regular Season.

The third matchup of the day is arguably one of the most highly anticipated, between FC Barcelona and AS Monaco. In the last official game of PES either of the teams have played, Game 2 of Matchday 5, the Blaugrana squad was able to defeat the previously undefeated Monegasque team, making it clear that competition is still strong between the group of impressive clubs. This was a sign of significant improvement from an already skilled FC Barcelona, and this matchup gives them the opportunity to show if they will continue this type of gameplay in the eFootball.Pro Cup. At the conclusion of the Regular Season, all three of AS Monaco’s players, ASM Kilzyou, ASM Lotfi, and ASM Usmakabyle were ranked within the top ten scorers, while FC Barcelona only had one, GuiFera, in the 10th place position. This matchup will show fans if statistics like this can help in predicting the outcome of a game, or if there’s more to winning than just high rankings.

FC Nantes and FC Schalke 04 are set to be the fourth matchup of the day. The two clubs were slated to face each other in the seventh matchday of the eFootball.Pro Regular Season, so this will be the first opportunity for spectators to witness the French and German team go head-to-head this season. While the league standings revealed Schalke as last, and FC Nantes as sixth and in position to reach the Knockout Stage, the teams we’re only four points apart and with GOOOL’s impressive individual performance during the Friendly Series, there is room for the German squad to prove their gameplay. The final matchup for Group A is between the second and fourth placing teams from the Regular Season, FC Bayern München and FC Barcelona. When the two clubs faced each other in the second matchday of the regular season, the German club took all six points at the conclusion of the competition. 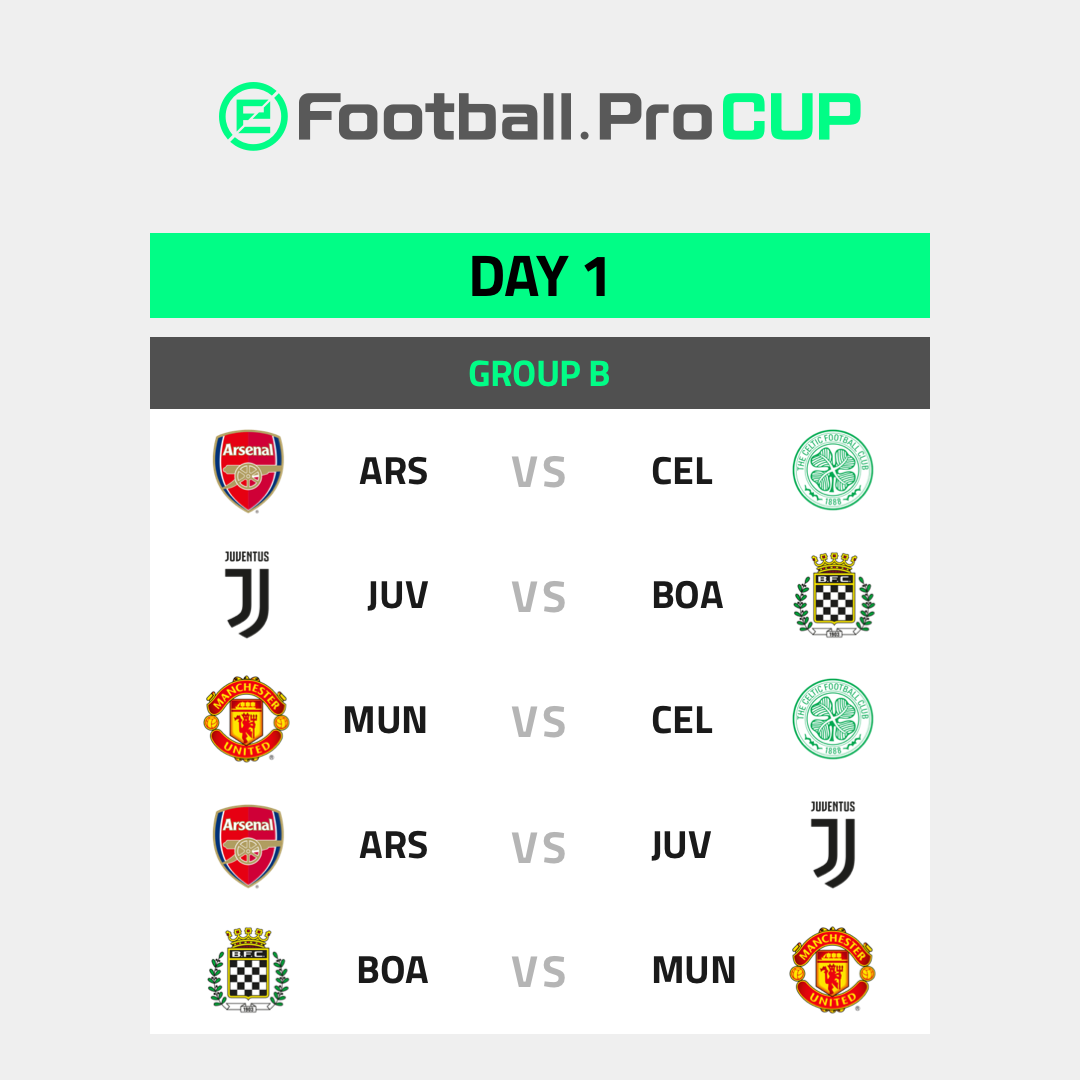 Group B:
The first game from Group B will be between Arsenal FC and Celtic FC, who weren’t scheduled to play against each other until Matchday 8. The two teams were only separated by one point and one ranking on the league table when the standings were finalized, and this matchup will be an opportunity for the clubs to prove if their gameplay would have resulted in their teams rising in the standings or not. The next matchup, between Juventus and Boavista FC, will be another anticipated match as the teams have already faced each other in Matchday 3 of eFootball.Pro which resulted in an even split of the points with three going to each team. Boavista managed to consistently rise in the rankings for the last three matchdays, and fans will now have the chance to see if the momentum will continue into the eFootball.Pro Cup.

Manchester United FC and Celtic FC are slated to compete third in Day 1 for Group B, facing off for the second time following their first competition in the third matchday of eFootball.Pro. Manchester United FC took home the majority of points that day, and were ranked fourth at that point in the competition. Once rankings were finalized, they placed ninth, close to Celtic FC’s eight place spot. The Scottish club can use this opportunity to prove they would’ve continued with the upward trend following JORCHA’s MVP award for his performance in the most recent matchday.

The fourth game will showcase a matchup between Arsenal FC and Juventus, who were scheduled to face each other on Matchday 9. Both teams have skilled players on their rosters, including talent like MVP of Matchday 2, ETTORITO97, who tops the standings in proactive defense. The last game of Day 1 will be between Boavista FC and Manchester United FC, who also weren’t set to play against each other until the last matchday of the Regular Season. While Manchester United FC’s OSTRYBUCH was awarded best goal of the first eFootball.Pro matchday, and no Portuguese players were recognized with the honor throughout the season, Boavista captain Barboza ended the league as the top defensive player. With five points between the fifth place ranking Portuguese team and the ninth place English club, spectators are curious if their performances will reflect those in the league table, or if this competition will show a completely different outcome.