The Scottish team’s consistent top-performer joined the elite group of players who have been honored with the MVP award so far this eFootball.Pro season

Celtic FC's JORCHA has had a remarkable first season participating in eFootball.Pro, with his performance finally being recognized with the award for Most Valuable Player of  Matchday 5. This was the first award won by any of the Scottish team representatives this season. In the matchday held on February 22nd, Celtic FC faced Boavista FC, which ultimately led to each team taking home three points at the conclusion of the competition. This outcome was largely to JORCHA's credit, with the Spanish player scoring over 50% of the goals for his team that day, mirroring the statistic that proves the same for his performance throughout the entire season.

The MVP held the highest amount of CO-OP points by end of the match, with 3,499 points. He also displayed his elevated PES skills with 83% of his passes, and 91% of his dribbles, being successful throughout the two games, helping lead his team to gain three points while playing against their Portugese opponents. While two of his three goals scored that day were in the second game, all three of his shots were on target from Game 1 and the majority of his CO-OP points were accumulated throughout the first game. He led in shooting (157), passing (399), and offensive positioning (316), which all contributed to his match-leading total. 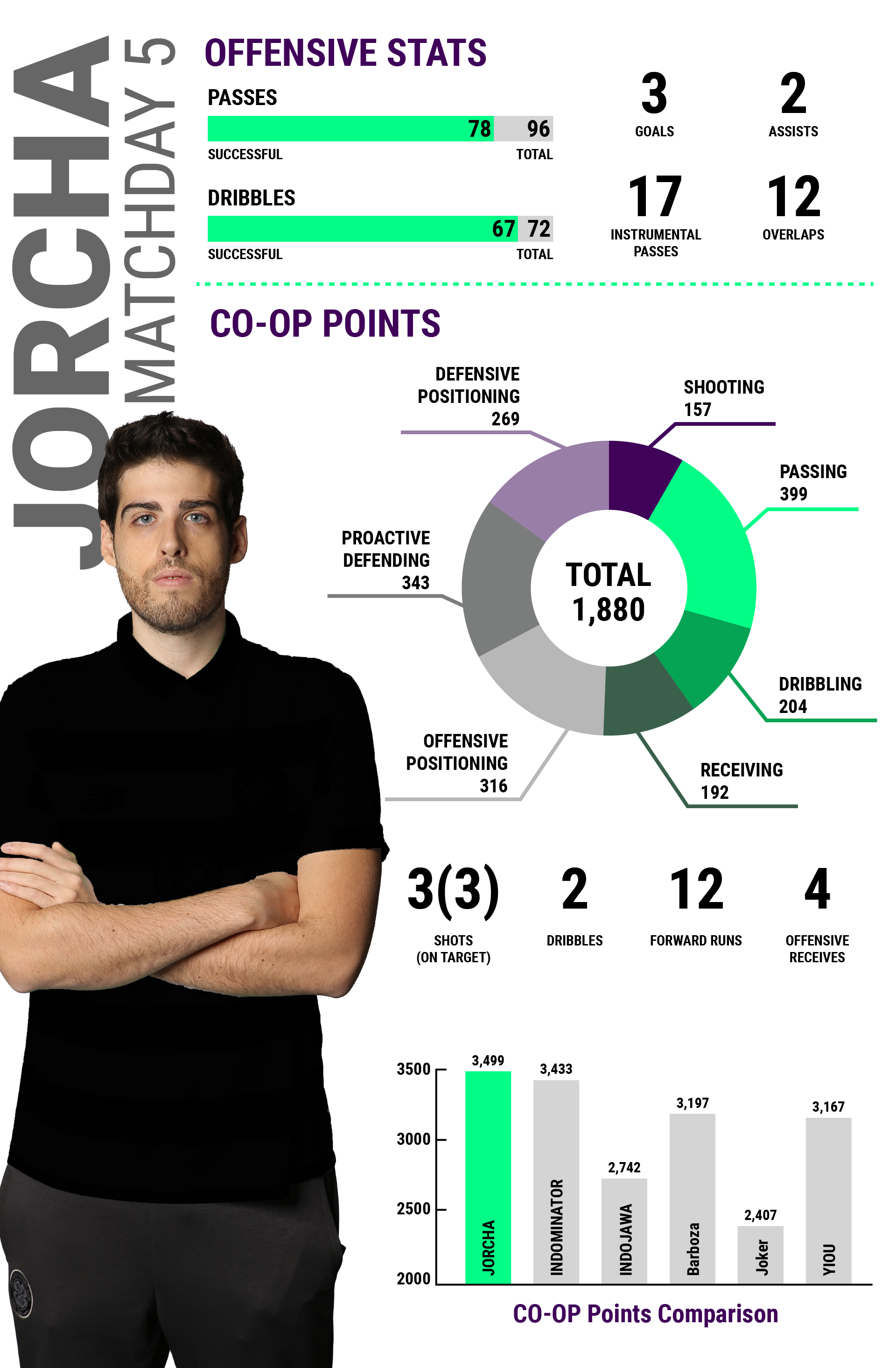 JORCHA's award-winning gameplay hasn't been exclusive to just the fifth matchday, made apparent by his position in the individual player rankings. With eight goals under his belt at this point in the Regular Season, he is currently the third highest scoring player in eFootball.Pro. He also holds the third highest ranking in passes made (333) and dribbles (348). He is in the fourth position for players with the amount of his shots being on target (15), and is tied for fifth for his number of shots on goal, at 19.

Host, Chris Parrott, observed that as time has progressed in eFootball.Pro, Celtic FC has continued to get "better and better," with the team remaining in the 8th ranking of the league table throughout the past two matchdays. This showcases the team's hard work and resiliency, bringing themselves up from the last place ranking they occupied following the second matchday of the season. With impressive gameplay, such as the skills JORCHA displayed in the most recent matchday, the Scottish team representatives proved that their club shouldn't be underestimated amongst their competitors.

Highlights of the day: Matchday 7

Players' best reactions to the gamepl...

Relive the iconic gameplay of Matchday 7