HenrykinhO is recognized as the Most Valuable Player of eFootball.Pro’s fourth matchday of the 2019-2020 season

Following an impressive display of PES skills by all FC Barcelona players, bringing their team to fourth place in the league table, HenrkykinhO was presented with the €10,000 check and title of MVP from the February 8th competition. Prior to the game, commentator Harry Channon stressed the importance of the teams' performances entering this matchday, stating: “The end of today will mark the halfway point of the eFootball.Pro Regular Season and teams are starting to run out of those games where, if you want to be in the final positions where you're playing for the Knockout Stage, you have to be securing points.” The Blaugrana squad performed accordingly, not only by having one of their players achieve this highly valued award, but also by earning four points resulting in their team rising in the rankings.

In the matchup between FC Barcelona and FC Schalke 04, HenrykinhO managed to lead in CO-OP points for both games, with 1,756 in Game 1, and 1,865 in Game 2, and was ranked second overall that day. He held the lead against both his teammates, and German opponents, throughout the entire matchday in offensive positioning (834), overlaps (24), and offensive receives (8). Although he didn't lead the match in dribbling or passing, he still possessed remarkable success rates, with his dribbling at 74% and his passing at 81%. He was closely trailed in CO-OP points by his teammate, GuiFera (3,504), showcasing FC Barcelona as a strong contender for the eFootball.Pro championship title.

While he wasn't personally responsible for any of the goals scored for his team during the competition that day, he used his extensive knowledge and experience in PES to anticipate where he would be most valuable, clearly shown leading up to GuiFera's goal in minute 32' of the first game. Finding himself in a tough position, near the goal line and in close proximity of FC Schalke 04's defense, he expertly dribbled and moved the ball out of the German team's reach, then passing it to The_Palma who was able to execute the assist. Plays like these, that demonstrate HenrykinhO's control and presence of mind while competing, prove his worthiness of the award. 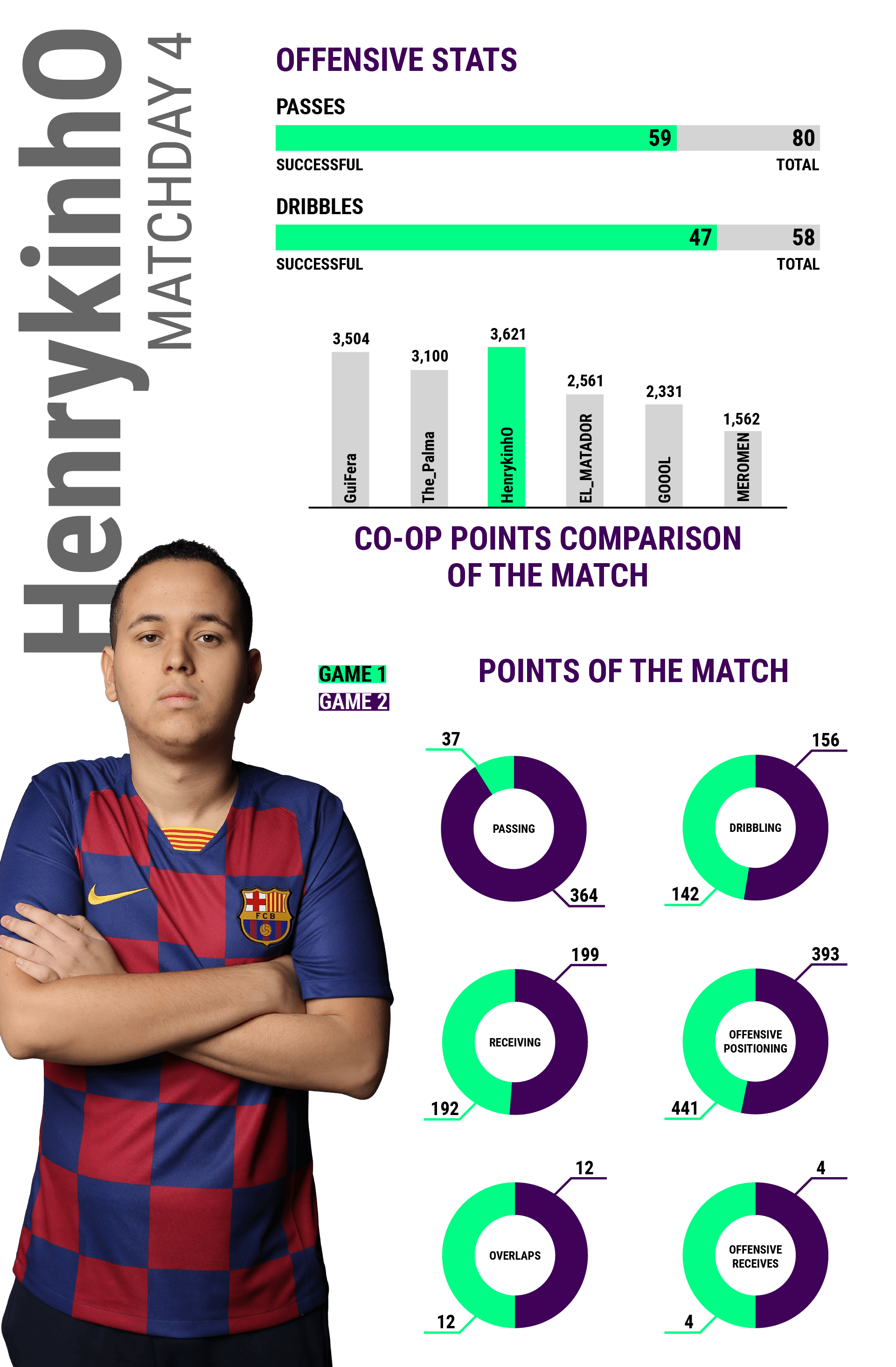 After announcing the FC Barcelona player as the recipient of the award, host Chris Parrott inquired about how it felt to win the award, to which HenrykinhO replied by expressing his happiness while also thanking his teammates. When asked about what parts of his performance led to this recognition, he again mentioned that it was possible because of the help he received from fellow FC Barcelona players, GuiFera and The_Palma, who had both scored a goal in the fourth matchday.

Parrott commended the skillful play shown by the entire team, pointing out HenrykinhO as the “star man” of the matchday, deserving of the MVP title. Outside of his gameplay in eFootball.Pro, he has also been crowned winner of 2018 and 2017 e-Brasileirao, the official PES competition of the Brazilian Football Confederation, representing Cruzeiro, proving himself as a top opponent in this professional competition.

Relive the exciting gameplay of the e...

The most interesting stats of the eFo...