With the entire Monegasque squad performing exceptionally, it was top assisting ASM Usmakabyle who was recognized for his gameplay in the third matchday of this eFootball.Pro season

Proving their unwavering first place ranking in the eFootball.Pro league, a second player from AS Monaco was crowned Most Valuable Player following the third matchday of the Regular Season. While all three AS Monaco players scored two goals each and had impressive CO-OP point totals, it was ASM Usmakabyle who walked away with the award and MVP title, chosen by Konami following an analysis of the eFootball.Pro players’ performances.

ASM Usmakabyle dominated throughout the entirety of the day, leading both games with 66% of his passes and 83% of his dribbles being successful. He also had the most key passes (4) and receives (45), with the highest number considered good receives at 16. With a total of 33 interceptions over the two games, he held the highest record over both his teammates, and their French competition that day. Over the course of the matchday, ASM Usmakabyle earned 3,259 CO-OP points overall, the second highest of the matchup between AS Monaco and FC Nantes, with all players on the opposing team being unable to break past the 3,000 point threshold.

Following his gameplay in Matchday 3, the French player was tied for the highest number of goals scored (7), two of which he scored in minutes 71’ and 80’ during the first game of his award winning performance. He has also managed to hold the title of player with the most assists (currently 11) since the first competition of the season, while all other eFootball.Pro players have yet to break into double digit amounts in this area. In addition, ASM Usmakabyle is ranked within the top five players for proactive defense, second in passes with twelve being vital, and first in the league for passes intercepted (111). 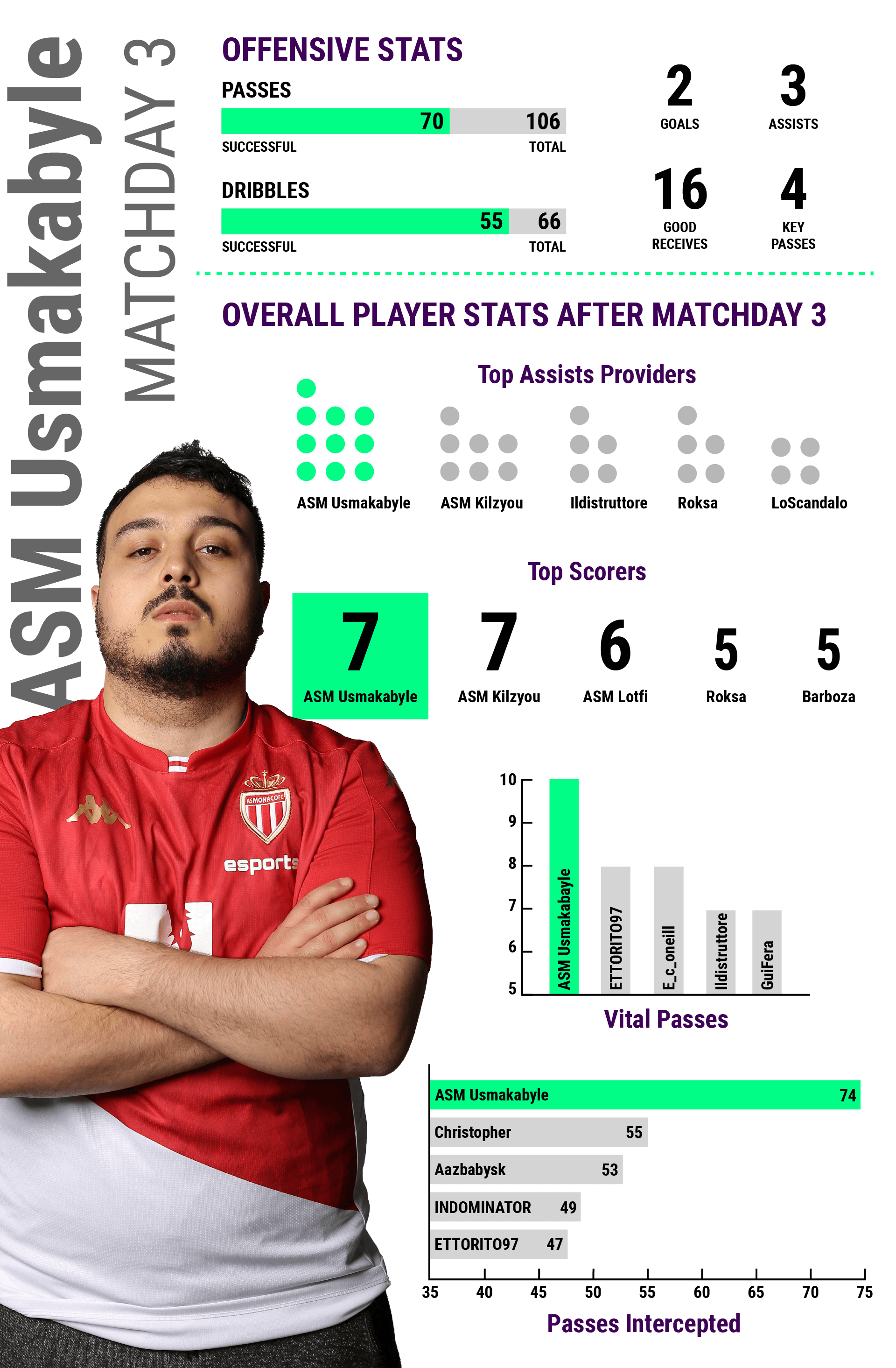 After introducing ASM Usmakabyle as the award winner, by describing him as “one of the greatest players, currently, on the planet”, host, Adam Butcher, asked the talented competitor how it felt to be presented with the €10,000 award. He reflected that he was “very happy to win” the award, but mentioned that it was a group effort, recognizing his teammates ASM Kilzyou and ASM Lofti. The MVP also remarked that the most important takeaways from the matchday were that they were able to defeat their opponents, FC Nantes, and take all six points at the conclusion of the day. He illustrated receiving the award for Most Valuable Player as the “cherry on top” of the Monegasque team’s impressive performance during the January 25th competition.

This MVP title was added to a list of many other achievements earned by the well decorated AS Monaco player. ASM Usmakabyle was also crowned champion of PES League in 2015, 2016, and 2019, and was awarded MVP three times in the previous eFootball.Pro season, where he and teammate ASM Lotfi won the championship title and hope to reach a similar victory in this 2019-2020 season, with new teammate and fellow MVP winner, ASM Kilzyou.

Most experienced players in league hi...