FC Bayern München, FC Barcelona, Manchester United FC, and Juventus are the top four teams that emerged from Days 1 and 2 of the eFootball.Pro Cup, and will advance to the Knockout Stage

After Day 2 of the Group Stage, the four teams moving on to the Knockout Stage of the eFootball.Pro Cup have been determined. Spectators will see FC Bayern München face Juventus, and Manchester United FC will compete against FC Barcelona. The victors of each of these matchups will then face each other in the Final, a single match to decide who will be crowned champion of the eFootball.Pro Cup. Both the Semi-Finals and the Final are set to be broadcast on July 31st. The second day of competition began with almost all teams in playoff contention, competing for the coveted first and second place spots that would advance them to the Knockout Stage. There were unexpected results, such as FC Nantes’ victory over the previously undefeated first place FC Bayern München, and consistent impressive gameplay, like Manchester United FC’s undefeated playoff run, with only one draw against second ranking Juventus.

The first matchup of Group A was between AS Monaco and FC Schalke 04, two teams that ended the Regular Season of eFootball.Pro on opposite ends of the league table, with the Monegasque team in first and the German squad in last. However, in the eFootball.Pro Cup, they both concluded Day 1 with three points each. The teams didn’t continue to perform evenly, however, as AS Monaco defeated Schalke in a shutout victory of 0-4, including a hat trick by ASM Lotfi and a “picture perfect” goal by ASM Kilzyou. The second game had FC Barcelona facing FC Nantes, which was a crucial competition for the French club to win in order to avoid elimination from Knockout Stage qualification. The game was in Barcelona’s favor throughout its entirety, with Kepa attempting to bring the French team ahead scoring a goal in minute 87’, after the score had been 3-0 prior to the shot. HenryKinhO brought the score to 4-1 in minute 90+4’, completing the second hat trick of the day.

The third matchup was arguably the most highly anticipated competition since the cancellation of the Regular Season. AS Monaco and FC Bayern München were ranked closely in first and second place, with only one point separating them in the league table, when eFootball.Pro was halted. The two teams were scheduled to go head-to-head on Matchday 6, where spectators expected to gain more insight on how their PES skills would compare. Described by commentator Harry Channon as, “two of the finest clubs eFootball.Pro has to offer,” they displayed an impressive gameplay by not conceding a goal on either side of the field, resulting in a 0-0 result by the end of the game. The one point gained by both the Monegasque team and the German club, this solidified FC Bayern München’s position in the Knockout Stage, making them the first team to qualify.

The fourth game of Group A was a matchup between FC Schalke 04 and FC Barcelona. This was another pivotal game, because the Blaugrana squad’s performance would determine whether or not they could take back Knockout Stage qualifying spot from AS Monaco. The game began in the German team’s favor, with a successful shot on goal made by Meromen in minute 23’. However, FC Barcelona captain GuiFera made a last minute equalizing goal in minute 87’, which Channon reflected was the goal that potentially could “save Barcelona’s eFootball.Pro Cup campaign.” This observation turned out to be true, as the game ended at a tied result of 1-1, putting Barcelona ahead of the Monegasque team and back into a position qualifying them for advancement. Although FC Schalke 04 went into the game with no chance to qualify for advancement, as head-to-head tiebreaker rules would prevent them from moving forward even if they earned all six points, they still wanted to prove themselves as skilled PES competitors, and also had the opportunity to shake up the rankings if they defeated FC Barcelona.

The final matchup included a surprise result, as FC Nantes managed to gain their first win in the eFootball.Pro Cup against the previously undefeated FC Bayern München. It was a close game from the beginning, with a goal from MESTRE in minute 17’, putting the German team in the lead from the start. However, Roksa equalized the score not once, but twice, in minutes 33’ and 48’, keeping the French team in the running after Bayern captain, JOSE, scored a goal in between during minute 44’. It was Kepa who made the game winning shot in minute 89’. After an impressive run for the German team, Channon points out that the French club was able to point out their opponents’ “defensive frailties they need to fix to win the cup.” 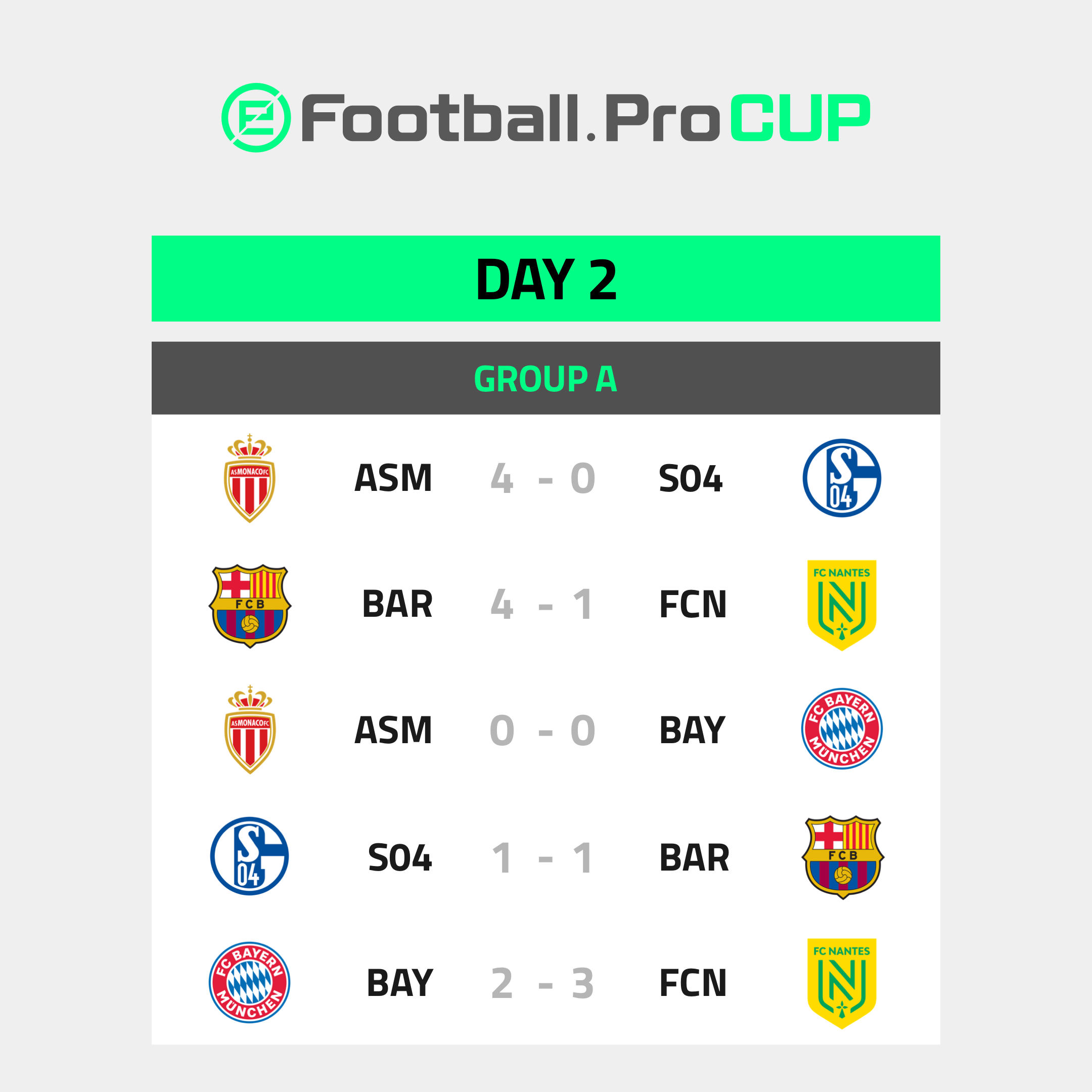 Celtic FC and Juventus were the first two teams of Group B to play, with Juventus entering Day 2 at the top of the standings and undefeated in the previous day of competition. They started off the game ahead, with Ildistruttore bringing the Italian team ahead 0-1, scoring in minute 51’. Celtic FC managed to avoid a loss with INDOMINATOR making the equalizing shot in minute 64’, resulting in each team taking a single point away from the match. The tie was crucial in helping Celtic FC avoid losing the possibility of qualifying for the Knockout Stage. The next pair to compete was Manchester United FC and Arsenal FC, a game that was key for Manchester to solidify their playoff spot, or for Arsenal to avoid being taken out of the running. KAMS put Manchester United FC on the scoreboard almost immediately with his shot in minute 10’, quickly countered by S-Venom’s in minute 12’, bringing the score back to a tie. The draw didn’t last long, however, as KAMS achieved a hat trick with his two back-to-back goals, and OSTRYBUCH with the final goal of the game in minute 79’, bringing the result to a 4-1 win for Manchester United FC. This guaranteed their qualification for the Knockout Stage, while also taking away Arsenal FC’s chance of doing the same.

Celtic FC and Boavista FC faced each other in the third game of Day 2 for Group B, which was another important opportunity for the Scottish club to a chance of advancing to the Knockout Stage, with their fate still ultimately being decided by the results of the following match. INDOJAWA was the representative for Celtic FC that ultimately scored the impressive team goal against their Portuguese opponents in minute 26’, ending the game at 1-0 in favor of Celtic FC. Boavista FC was already out of Knockout Stage contention, and continued to have zero points gained following the third game of the day.

The fourth game of the group, between Juventus and Manchester United FC, had the power to decide multiple aspects about the eFootball.Pro Cup moving forward. This game would be the deciding game for Celtic FC’s fate and whether or not they will advance instead of Juventus, as well as determining which club would place first at the conclusion of Day 2, and face FC Barcelona in the Knockout Stage, being the second place team from Group A. Juventus took the lead in minute 25’ of the game after Ildistuttore made the shot that Harry Channon predicted “might sink Celtic’s hearts.” KAMS managed to equalize the score in minute 70’, bringing the final result to 1-1. Channon predicted correctly, as this game advanced Juventus to the Knockout Stage, and secured Manchester United FC’s first place position moving forward. The final game between Boavista FC and Arsenal FC was played for pride, according to Channon, as both teams had no chance to advance to the Knockout Stage. Portuguese captain, Barboza, made it clear that his team was still hoping for a win because they have “a shirt to defend” and want their image to reflect their skill in the game. Christopher achieved the first goal of the game in minute 33’, followed by teammate Alex Grd scoring a second in minute 85’. It was right before the conclusion of the game that Barboza assisted the Portuguese team in avoiding a shutout loss with his goal in minute 87’, the only goal of the entire eFootball.Pro Cup for Boavista FC. 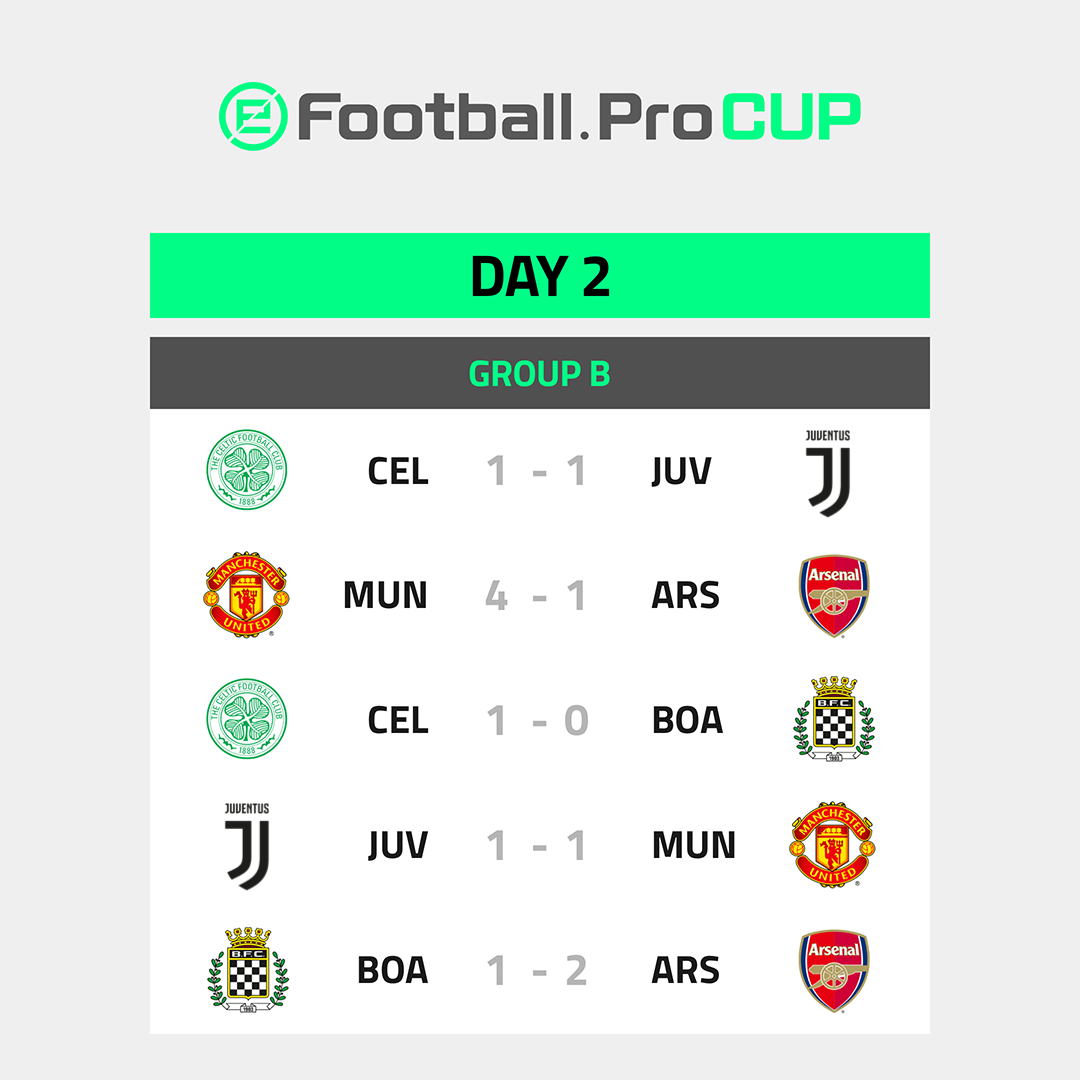 With all games played from Day 1 and Day 2 of the eFootball.Pro Cup, it is now finalized that FC Bayern München and FC Barcelona will be advancing from Group A, and Manchester United FC and Juventus from Group B. Three of these teams occupied the top four rankings from the eFootball.Pro Regular Season, with Manchester United FC being the outlier, occupying eighth place at the conclusion of the season. The Knockout Stage will give spectators a chance to see if one of the top ranked teams will also be crowned champions of the eFootball.Pro Cup, or the English squad can prove that they have improved since their performance in eFootball.Pro, and will take home the title.