KAMS and Aazbabysk reach the final of the eFootball.Pro Friendly Tournament

29 eFootball.Pro players participated in the 1v1 online competition on March 28th. The results of the final match will be announced by Konami

The offline fixtures of eFootball.Pro were interrupted after Matchday 5, but the players are still active playing at home. Konami organised the eFootball.Pro Friendly Tournament on March 28th, a 1v1 online competition between the eFootball.Pro players that wanted to join. A total of 29 competitors from all clubs faced each other in a Knockout Stage, and Manchester United FC’s KAMS and FC Nantes’ Aazbabysk reached the final match. 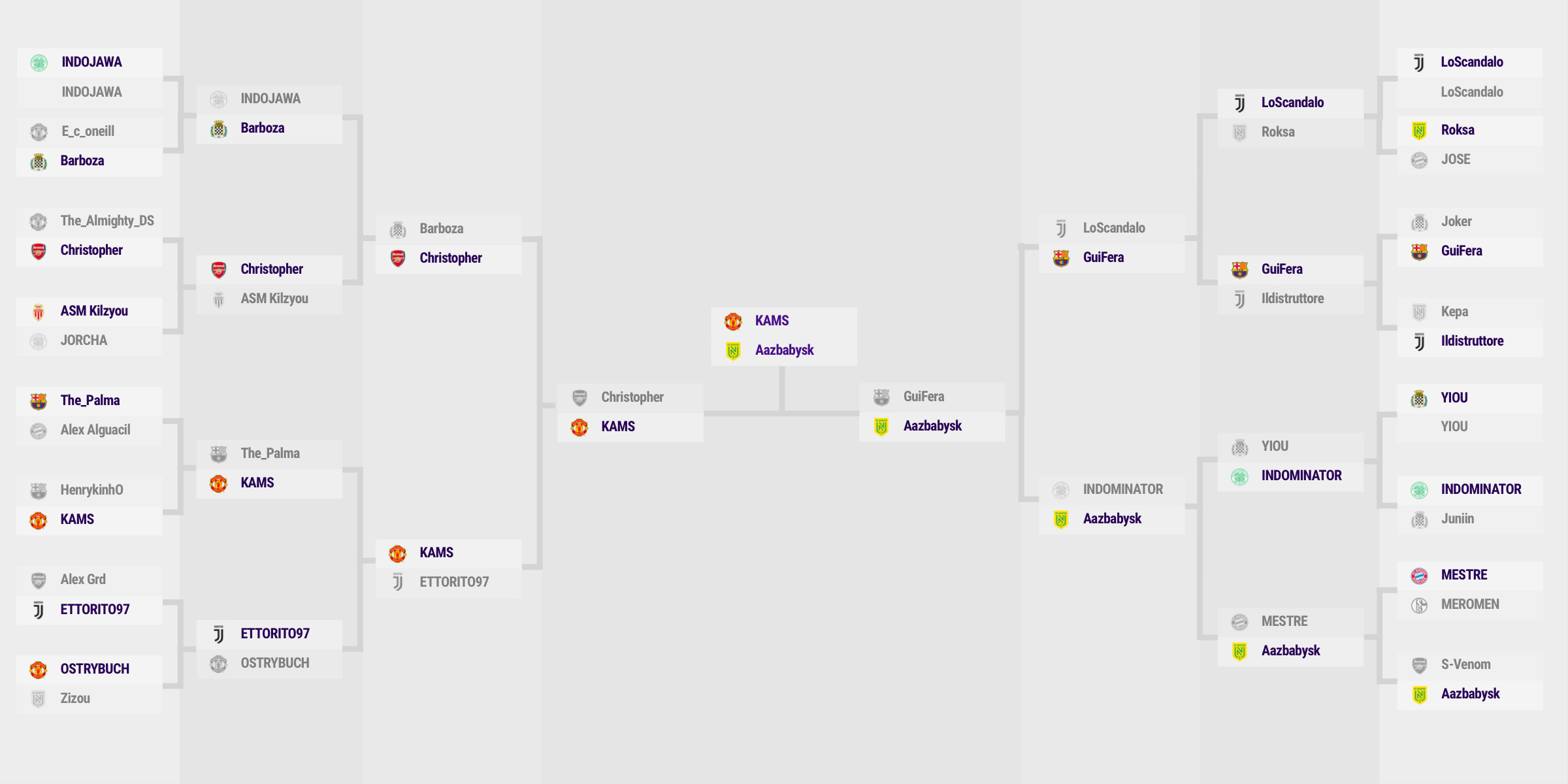 The eFootball.Pro Friendly Tournament began shortly before 10:30h CET with the match between Manchester United FC’s E_c_oneill and Boavista FC’s Barboza, which the Portuguese player won 0-1. The bracket was decided randomly, establishing only that players from the same club couldn’t face each other in the Round of 32. The draw also decided that INDOJAWA, LoScandalo and YIOU were automatically qualified for the Round of 16, since there weren’t enough competitors to fill all the first round’s matches.

The most crushing defeats in the Round of 32 were two 5-2: the one of MESTRE against MEROMEN, that left the only FC Schalke 04 representative out of the competition in the first round, and the victory of INDOMINATOR over Juniin, after coming back from an initial 0-2. Some other crushing defeats, all by a difference of three goals, were the 4-1 between ASM Kilzyou and JORCHA, the victory of ETTORITO97 over Alex Grd also by 1-4, and another 1-4 of Ettore’s teammate, Ildistruttore, who defeated Kepa. 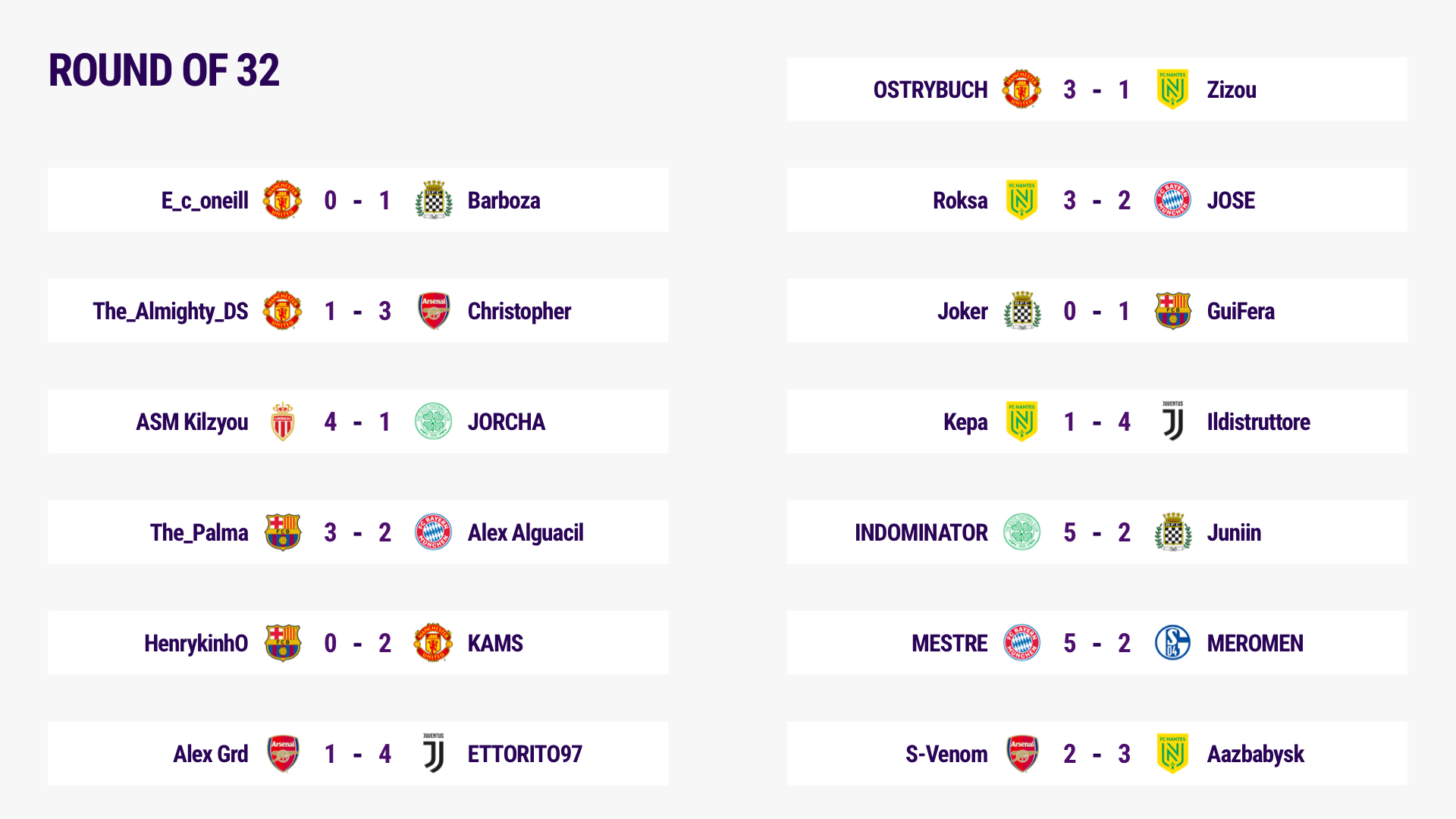 FC Barcelona’s The_Palma took revenge after their defeat in Matchday 2 against FC Bayern München and beat Alex Alguacil by 3-2, coming back from an initial 0-2. Another Bayern player eliminated in the first round was JOSE, who also lost 3-2 to FC Nantes’ Roksa, although the Spaniard saw a ray of hope when he scored two goals after the three initial points of the Serbian.

Manchester United FC’s KAMS and OSTRYBUCH both advanced to the Round of 16. The French player defeated FC Barcelona’s HenrykinhO by 0-2, and his teammate OSTRYBUCH won 3-1 against FC Nantes’ Zizou, who represented the Canaries in Matchday 1. On the other hand The_Almighty_DS lost to Christopher by 1-3 in one of the first matches of the morning, with Christopher being the only player from Arsenal FC that managed to get past the first round. His teammate, S-Venom, lost to Aazbabysk 2-3. The shortest result of this first round, together with the one of E_c_oneill vs Barboza, was another 0-1 of GuiFera over Joker, that resulted in the FC Barcelona captain advancing to the Round of 16. 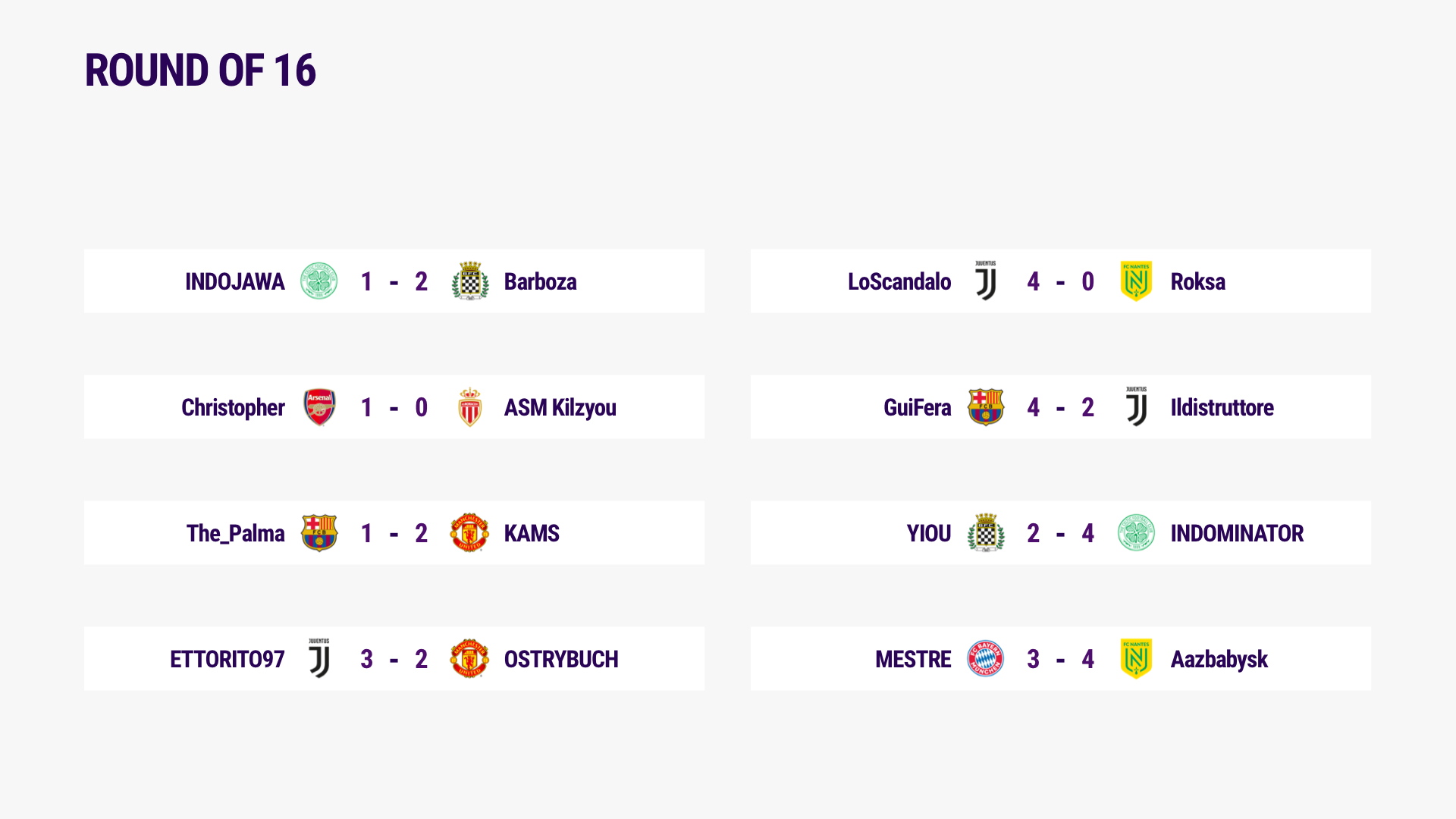 The Round of 16 began with GuiFera eliminating Ildistruttore, this time in a higher-scoring match that ended 4-2, after an initial goal of the Italian player. Luca’s teammate, ETTORITO97, defeated OSTRYBUCH by 3-2 in a game that was a close call until the final moments. The third Juventus player, LoScandalo, was in charge of the highest scoreboard of the round, beating Roksa 4-0. The other FC Nantes player in this round, Aazbabysk, managed to win MESTRE 3-4 and to reach the Quarterfinals. This result left all FC Bayern München players out of the competition.

This round had many matches in which very experienced players faced relative newcomers to the eFootball PES competitive scene. One of them put Christopher and ASM Kilzyou face to face and had only a lone goal by the Arsenal FC’s captain, ending all of AS Monaco’s aspirations to advance in this friendly tournament. Similarly, KAMS, who is new to eFootball.Pro this season but has many years of experience in both French and international competitions, overcame FC Barcelona’s The_Palma 1-2. Celtic FC’s INDOJAWA, who played directly in the Round of 16, lost to Barboza 1-2, while his brother, INDOMINATOR, advanced to the Quarterfinals after defeating another player in his first match, YIOU, 2-4. 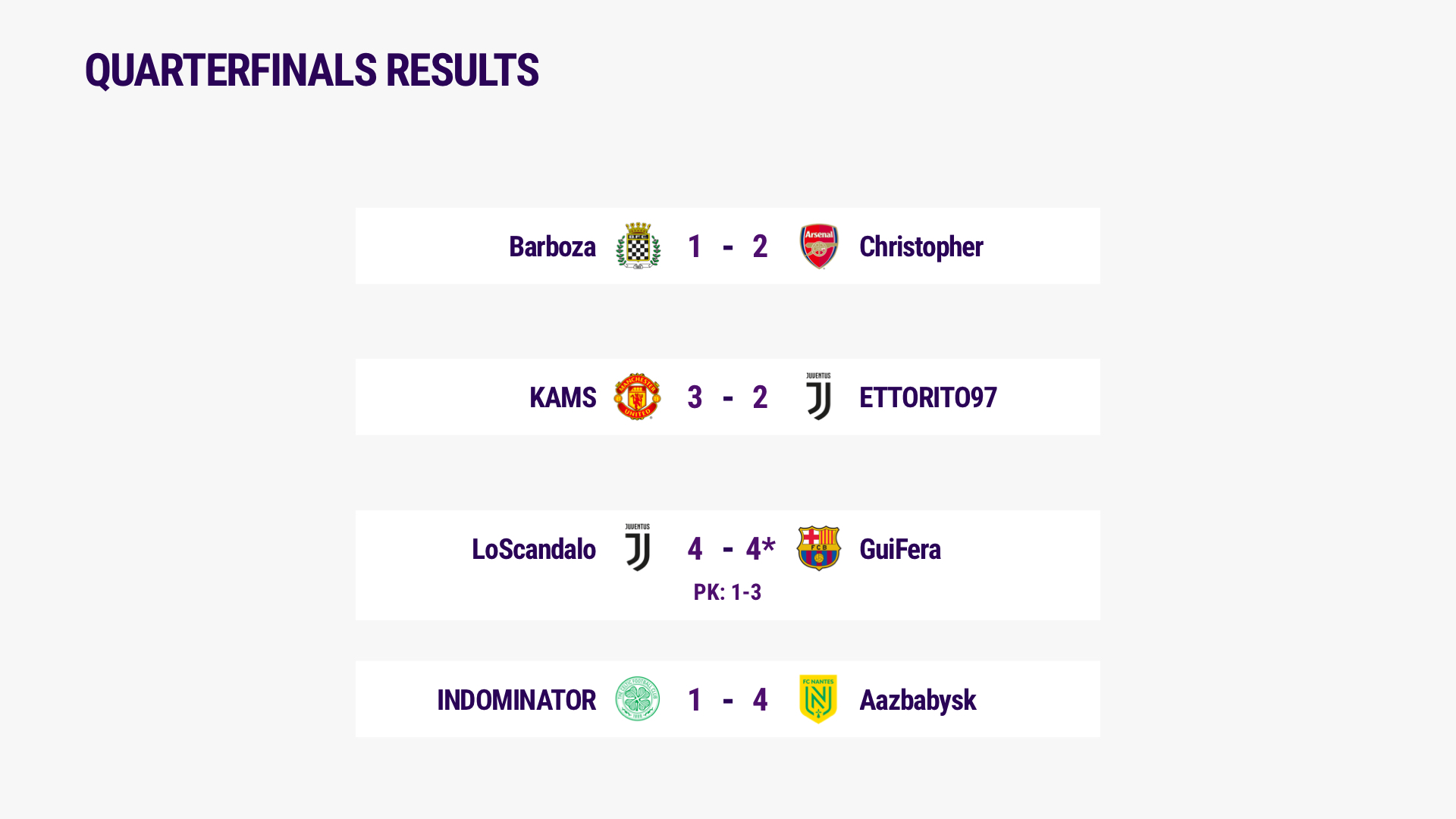 The Quarterfinals began with the eight spots fairly divided among eFootball.Pro clubs, with only Juventus standing out with two competitors. ETTORITO97 played a very even game against KAMS. The French player scored the first two goals, but the Italian managed to tie 2-2. The match was decided with a late goal by KAMS in the minute 93’ to set the final 3-2. LoScandalo had the same luck as his teammate in one of the most exciting matches of the tournament against GuiFera. After only 25 minutes of the game, the scoreboard was 2-3. From Guilherme almost scoring 2-4 before halftime, the match evolved to the 3-3 goal of Renzo in the 60’. GuiFera then scored 3-4 in the minute 83, and LoScandalo evened the score in the second minute of injury time. The extra time didn’t alter the result and the game went to the penalty kickoff, which was clearly dominated by GuiFera. The Brazilian scored three out of four and stopped another, defeating LoScandalo who sent one to the terraces and another to the crossbar.

After a good start of the tournament, one of the surprises of the competition began in the Quarterfinals: Aazbabysk's path to the final. The French player dominated the result of the match against INDOMINATOR and obtained a final 1-4. The last game of the Round of 8 was close to another surprise, after a full time that ended 1-1 between Barboza and Christopher. The players performed evenly, with chances for both Boavista FC and Arsenal FC. The extra time was coming to an end but they both kept pressing until the final minutes, and Christopher was the one who scored the final 1-2 in the minute 117’ before letting the game advance to the penalty kickoff. 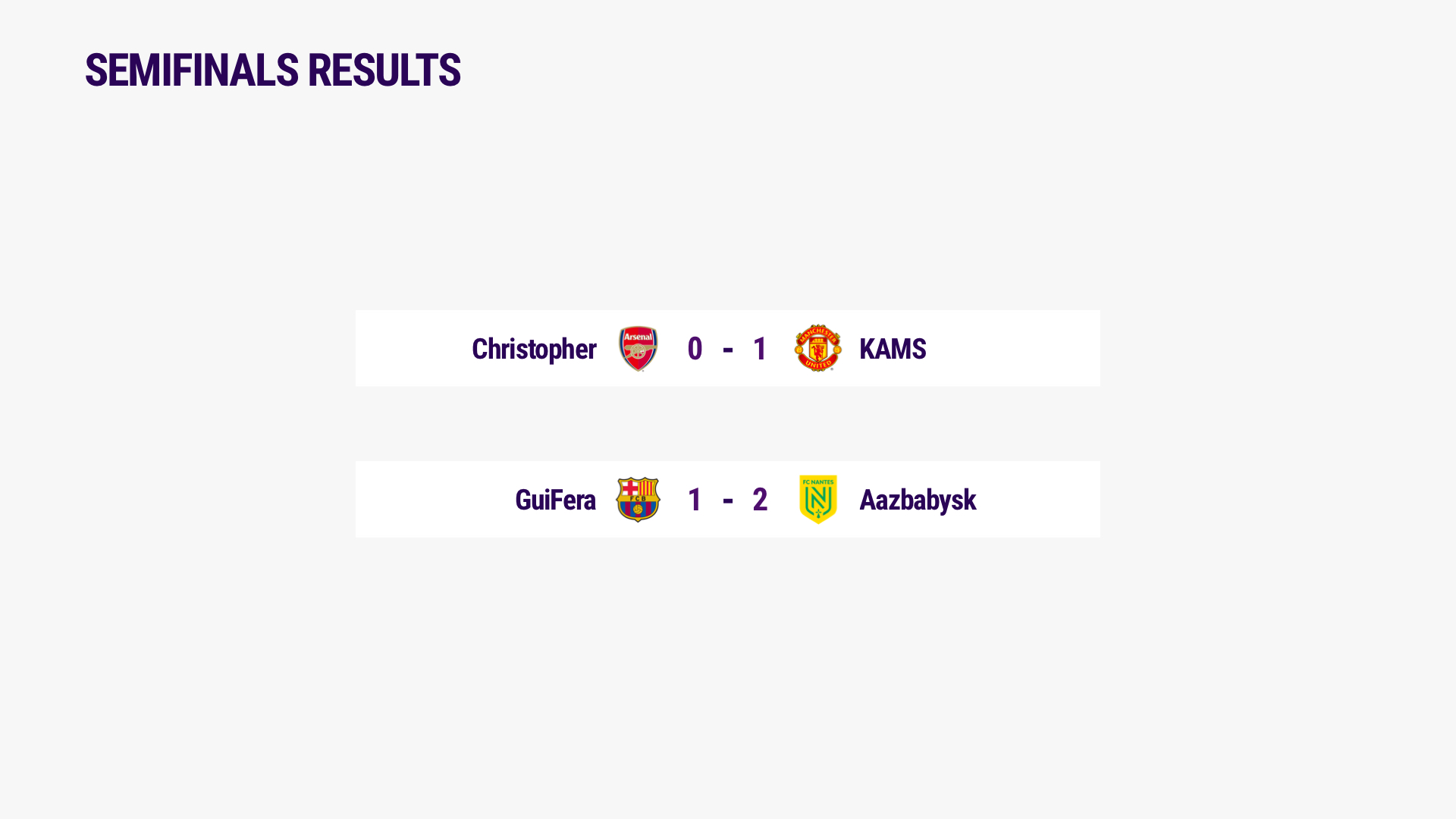 The semifinal between GuiFera and Aazbabysk began very balanced, with opportunities for both players, including a shot to the post of the FC Nantes’ representative. GuiFera was the first who managed to score, setting the 1-0 in the minute 26’, but right before halftime he missed and scored an own goal that tied the match. In the minute 65’ was Aazbabysk himself who scored the 1-2, and kept that result until the end, only seriously threatened by an attemp of GuiFera just before the final.

Christopher and KAMS played the second semifinal, which had less goals than the first one. During the 90 minutes of the full time, the ball was very divided between both players, without clear chances for either of them and a 0-0 on the scoreboard. The situation extended until extra time, in which Christopher kept playing conservative and his rival took advantage to score 1-0 in the minute 102’, trespassing Christopher’s defence line.

The Final of the eFootball.Pro Friendly Tournament was an all-French match between Manchester United FC’s KAMS and FC Nantes’ Aazbabysk, played a few minutes after 17:30h CET. The result of the competition will be announced by KONAMI soon.