An analysis of the two hat tricks this eFootball.Pro season

AS Monaco’s ASM Lotfi was the first player to complete a hat trick in the 2019-2020 eFootball.Pro season. The Monegasque team’s player managed to do so in the first game of the very first matchday of the season, proving from the start that AS Monaco would be the team to beat, with not only the three goals necessary to be considered a hat trick, but a fourth as well, all contributing the overall score of 1-6 against Arsenal FC. The impressive feat began with ASM Lotfi’s first goal in minute 21’, which was almost manually saved by the English goalkeeper, but Lotfi managed to gain possession of the ball bouncing off of Christopher in the failed save, and shoot it into the bottom right part of the goal, equalizing the game at 1-1. His second goal was scored in minute 35’ after some expert passing by his teammates. He positioned himself almost directly behind the penalty mark, in perfect position to take his second successful shot on the opponent’s goal.

The third followed quickly, scored in minute 50’. ASM Lotfi lobbed the ball from just behind the halfway line, where ASM Usmakabyle quickly headed the ball over to ASM Kilzyou. From outside the penalty area, where the ball was received, it was sent to ASM Lotfi who was again positioned perfectly to take the shot at the penalty mark. For his fourth and final goal of the game, the ball was ricocheted back and forth between both Arsenal FC and AS Monaco players within the penalty arc and just inside the penalty box, where Lotfi was ultimately the one to clear the ball out of the area and into the English goal. Channon observed that with gameplay like this, AS Monaco was “starting how they ended last season,” referencing their championship title earned in the 2018-2019 season.

The second and final player of eFootball.Pro to complete a hat trick this season was Juventus’ LoScandalo with the first three goals in a row in the second game of Matchday 2, where the Italian team faced FC Schalke 04 and ended up taking home all six points that day. The first shot in minute 41' put Juventus on the board, leading against the German team 1-0. After a shot by Ildistruttore bounced off of the cross bar and back on the field, Juventus regained control of the ball and was eventually put in LoScandalo’s possession while waiting inside the penalty arc, where he completed the “sensational finish.”

Following some successful team passing towards the German goal, LoScandalo received the ball inside the penalty arc, expertly evaded Schalke’s defense, and made the shot into the bottom left corner of the goal in minute 77’ of the game. Although the competition was already considered “game over” in favor of Juventus according to the commentators, LoScandalo took another successful shot on goal less than 5 minutes later in minute 81’ of the competition, completing the hat trick. Almost directly after his second goal, he gained possession of the ball at the halfway line, passing it to Ildistruttore and running ahead to just outside of the penalty box where he could receive the ball again, ahead of any German defenders, and take the shot in minute 81’ free of his opponents. 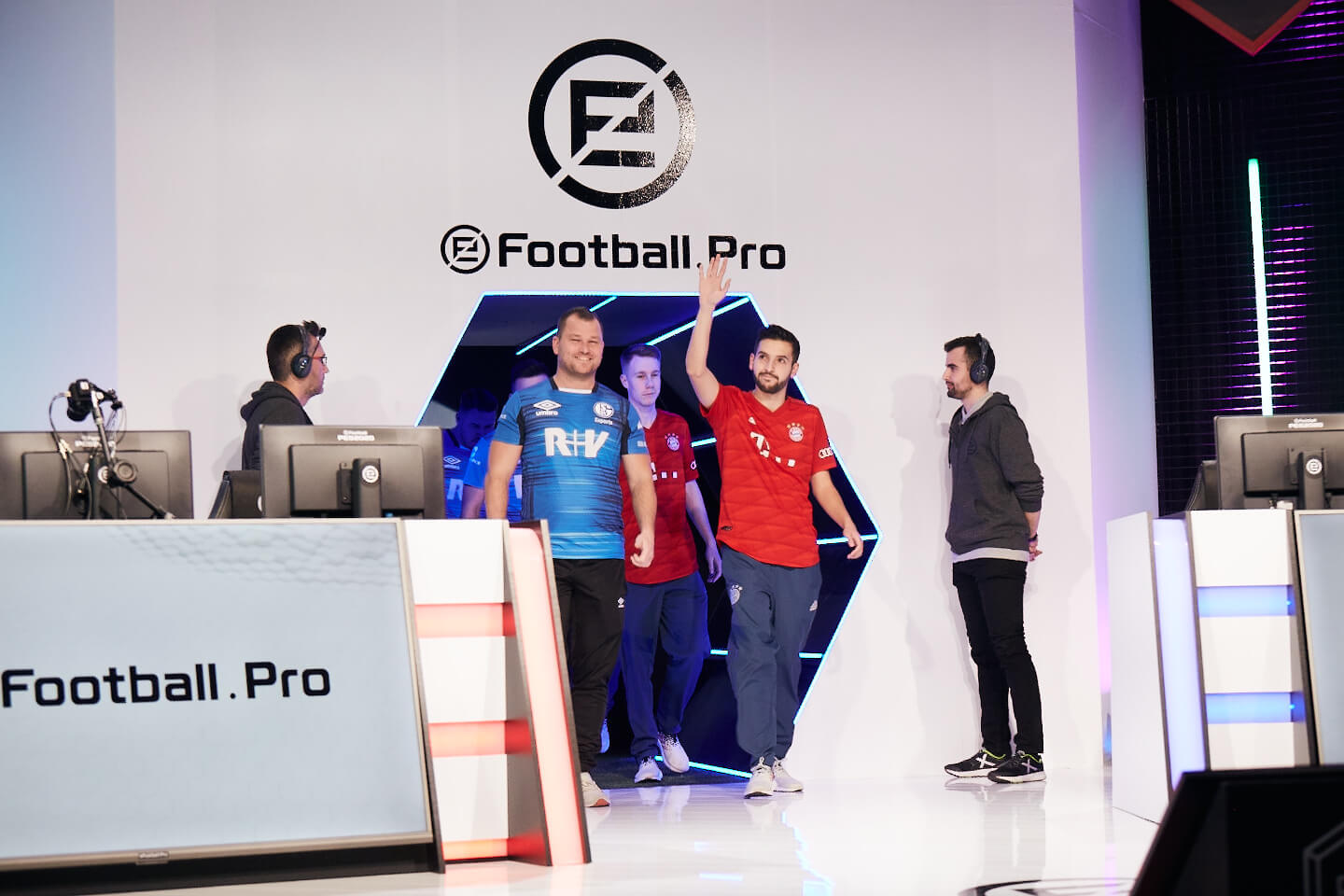 © KDE / Commentator Harry Channon (right) presents LoScandalo with the award for his hat trick achieved in Game 2 of Matchday 2, accompanied by teammates Ildistruttore and ETTORITO97.

Although ASM Lotfi and LoScandalo were the only two players in the 2019-2020 eFootball.Pro season to complete an official hat trick, other skilled players came extremely close to achieving the feat as well. This was the case for AS Monaco’s ASM Kilzyou on two separate occasions, the first being in the same matchday as his teammate, ASM Lotfi, where he scored one goal in the first game in extra time during minute 90+4’, then two more goals in the second game. In the fifth matchday, he scored two goals in the first game, followed by one in the second, yet he was unable to help secure his team’s undefeated status as they lost the second game to FC Barcelona 2-4. The third Monegasque team player, ASM Usmakabyle, also had the achievement within reach. With one goal in the first game, and two in the second, he contributed to the impressive six points earned by AS Monaco at the conclusion of the first matchday. It is clear through the sheer number of goals the three AS Monaco players have scored that their impressive offensive gameplay has been helpful in maintaining their first place position throughout the season.

Juventus’ Ildistruttore was almost able to complete the trick alongside his teammate LoScandalo in Matchday 2, where he scored two goals in the first game, and one in the second game. Although he didn’t achieve the hat trick, he contributed three of the eight goals scored against FC Schalke 04 that day. Boavista FC captain, Barboza, helped showcase the Portuguese talent in eFootball.Pro by scoring one goal in Game 1, and two goals in Game 2 in Matchday 4 where they faced the current second place team, FC Bayern München, helping earn the team three points by the end of the matchday and rise in the rankings. Although Celtic FC has been unable to reach Knockout Stage contention up until this point in the Regular Season, JORCHA scored an impressive goal in the first game of the fifth matchday, and two in Game 2. These goals contributed towards the three points earned by the Scottish team during the competition that day.

Look back on the excitement of Matchd...

AS Roma strips AS Monaco of their und...