10 eFootball.Pro players represented their clubs by competing in the friendly 1v1 online tournament on May 9th

eFootball.Pro returned to fans in the form of the Friendly Series, a 1v1 competition played by a representative from each team competing in the 2019-2020 season. Players from the bottom four teams in the league rankings participated in a preliminary round, including FC Schalke 04’s GOOOL, who advanced all the way to the Final, and was crowned champion of the friendly tournament.

The Friendly Series began with two matchups where the players competed for the chance to face the remaining eFootball.Pro competition in the Quarterfinals. The first was between Celtic FC’s INDOMINATOR and Manchester United FC’s KAMS. The game was played evenly, with the score equalized at almost every moment of the competition. It was KAMS who made the game winning shot to bring the score to 3-2 in minute 105+1’.

The second was between Arsenal FC’s Christopher and FC Schalke 04’s GOOOL. Going into this game, matchday commentator Harry Channon mentions that the German team has been having a tough time during the current eFootball.Pro season while “rooted at the foot of the table” in 10th place, and predicts that GOOOL’s individual performance may match this ranking as he has only scored one goal, and made zero assists, at this point in the Regular Season. The players managed to keep the score at 0-0 until minute 74’, when GOOOL was able to get ahead and maintain his lead throughout the rest of the competition.

The Quarterfinals commenced with FC Barcelona’s HenrykinhO facing Boavista FC’s Barboza. HenrykinhO was able to score the first goal in minute 3’, bringing the score to 1-0 in his favor where it remained for the entirety of the game, defeating his Portuguese competition and advancing him to the Semifinals.

In the following game, Juventus’ Ildistruttore competed against FC Nantes’ Roksa, two players that Channon thinks will be an exciting matchup as he states they are both “littering the top goals and assists charts in the league.” In the highest scoring game of the matchday at that point, Roksa impressively brought himself into the lead three different times throughout the competition, however was still unable to advance after Ildistruttore managed to equalize the game three times, and pull himself into the lead at minute 90’ to close out the game. 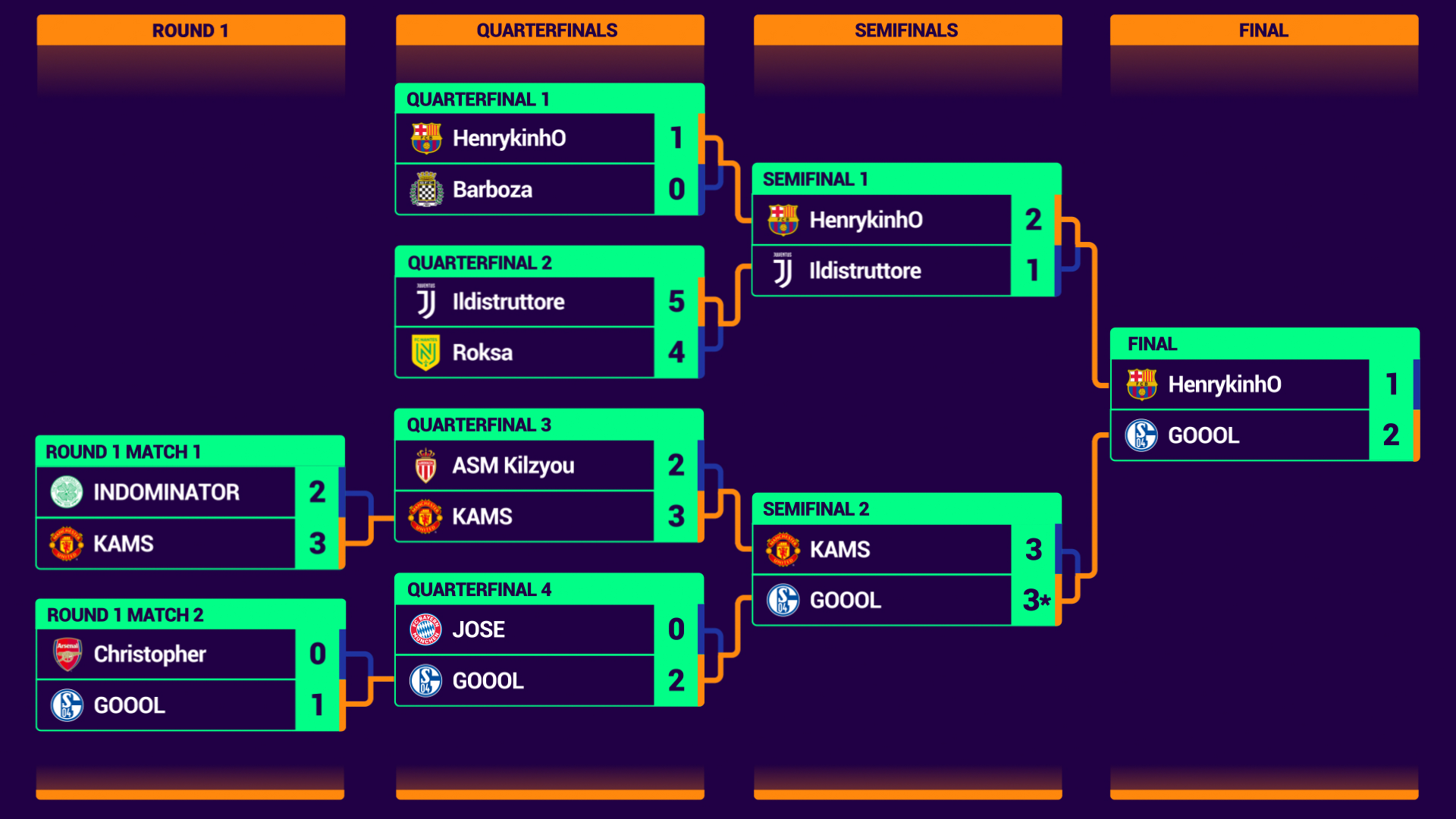 The third matchup, predicted by Channon to be a “battle of epic proportions”, was between former PES League teammates and European champions, ASM Kilzyou and KAMS. The Manchester United FC representative quickly took the lead, scoring two goals by minute 17’, and ultimately ended the game victorious over the AS Monaco player with a final score of 2-3. The last pairing of opponents in this stage of the tournament was between the two German eFootball.Pro club’s representatives, FC Bayern München’s JOSE, and FC Schalke 04’s GOOOL. The “Schalke Striker'' managed to win his second shutout game of the tournament, with a final score of 0-2, and advanced himself to the Semifinals.

HenrykinhO and Ildistruttore represented their closely ranked third and fourth place eFootball.Pro teams, facing each other in the first game of the Semifinals for a chance to compete in the Final. Halfway into the tight competition, the FC Barcelona representative was able to score two goals putting the score at a favorable 2-0 for the Blaugrana team. Although Ildistruttore was able to equalize his previous game on three different occasions, he was unable to accomplish this feat again, resulting in HenrykinhO’s advancement to the final stage of the series following his 2-1 victory.

Competing for the remaining spot in the eFootball.Pro Friendly Series Final, KAMS faced GOOOL, after both players managed to advance to this stage in the tournament following their preliminary round victories. Channon predicted that spectators would witness “plenty of goals” while watching this game, and the eFootball.Pro players proved him correct with a final score of 3-3 for the tied game. The competition continued into overtime, where the score remained equalized, forcing the players into a penalty shootout, and GOOOL ultimately being the player to advance to the finals after narrowly beating KAMS in the closest game of the entire series up until that point.

GOOOL managed to take the lead in the Final against HenrykinhO quickly, scoring a goal in minute 5’ of the highly anticipated game. The score remained 0-1 in favor of the German player until minute 21’ when HenrykinhO managed to equalize the competition by making a successful shot against the skilled defender. The close competition stood at 1-1 until GOOOL, considered the underdog throughout the series, scored the game winning goal at minute 52’, bringing the score to 1-2 and crowning him champion of the eFootball.Pro Friendly Series.

As the series began, Channon had commented that GOOOL was the player with the most to prove in this tournament, considering FC Schalke 04’s current ranking on the League Table, and the fact that he had to win the preliminary round as well. The German player admitted: “When I saw the bracket I thought it was going to be difficult because I had only very strong opponents. I didn’t expect to win, but I had a good day and I’m happy I could win this tournament.” His win was referred to as the “morale boost” that FC Schalke 04 needs when the eFootball.Pro season resumes.