As the eFootball.Pro Cup comes to an end, FC Bayern München takes the championship title

FC Bayern München, FC Barcelona, Manchester United FC, and Juventus were the four eFootball.Pro teams that advanced past the Group Stage of the eFootball.Pro Cup, to compete against each other in the Semifinals of the competition. Following close victories from FC Bayern München and FC Barcelona, including a tie-breaking game in the first Semifinal, it was the German club who proved themselves to be the ultimate champions.

The first Semifinal matchup of the eFootball.Pro Cup Knockout Stage was between FC Bayern München and Juventus. The German club went into the competition with only one loss on their record, while their Italian opponents entered undefeated. The first game began with a quick goal in minute 14’ by Alex Alguacil, and another by team captain and two-time best goal award winner JOSE in minute 32’, putting the German squad comfortably two goals ahead of their competition. The score remained at 2-0 in favor of FC Bayern München up until minute 71’, when Juventus captain ETTORITO97 halved his opponent’s advantage with a goal of his own. This was quickly followed by an unfortunate own goal by MESTRE that equalized the scoreboard, making a win equally possible for either team after Bayern gave up their impressive early lead. Following Juventus’ comeback in the second half of the game, they continued with the momentum with a final goal achieved in minute 83’ by LoScandalo, bringing the final result of the game to 2-3 and continuing Juventus’ undefeated run. Commentator Harry Channon observed that the FC Bayern München went from “controlling and commanding the game, to running behind” and needed to avoid repeating this performance in order to advance to the Final.

The second game between the German and Italian teams began similarly to the first, with an early goal by Alex Alguacil in minute 12’. He then followed it up with another goal of his own in minute 20’, giving FC Bayern München another 2-0 lead early in the game. This time, however, the German squad continued with their dominating gameplay, bringing the score to 3-0 following an impressive display of PES skill in MESTRE’s successful penalty kick in minute 41’. ETTORITO97 was the first Juventus player to put his team on the scoreboard, for the second game in a row, with a shot bringing the score to 3-1 in minute 53’. LoScandlo achieved the final goal of the game in minute 70’, still ending the game with a Juventus loss but bringing the aggregate score of the two games to 5-5, forcing an extra third game to determine which team would move on to the Final of the eFootball.Pro Cup.

The tie-breaker game began as the two previous competitions, with Alex Alguacil putting FC Bayern München on the scoreboard within the first twenty minutes of gameplay. In this final game, this was the only goal scored throughout the entirety of extra time, leading to a win for the German club and a spot guaranteed for them in the eFootball.Pro Cup Final. Juventus had various chances to equalize the score in hopes of securing the spot for themselves, including a shot by ETTORITO97 off the goal post that Channon admitted was a move the Italian player doesn’t miss often. Alguacil reflected on his team’s gameplay in the Semifinal, stating: “We scored our goals, we defended with everything, with the heart.” 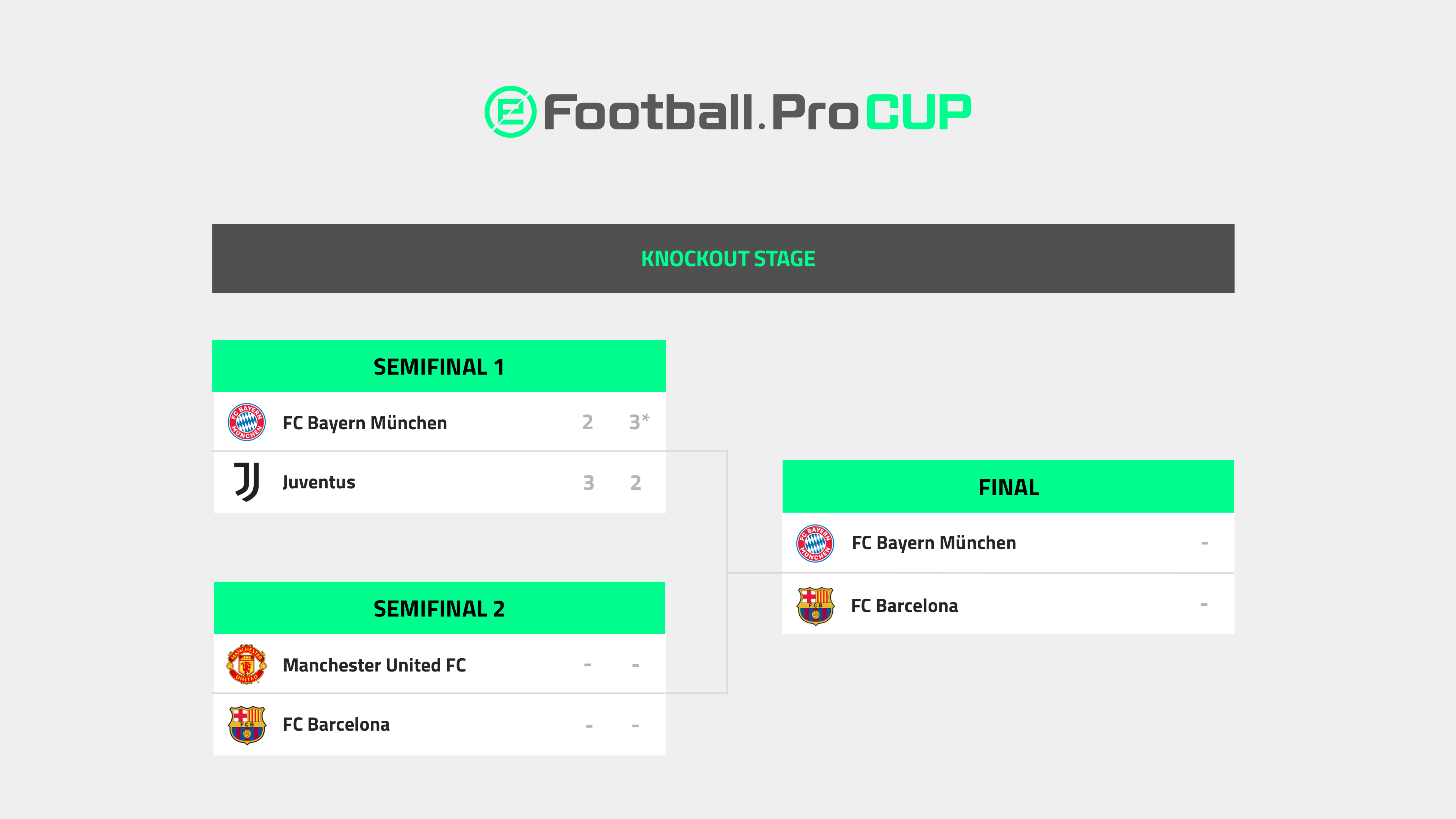 The second matchup of the Semifinal had Manchester United FC, ending the Group Stage with the highest number of points from either group, facing FC Barcelona. Prior to the game, Channon noted: “It’s an intriguing affair when you consider that Manchester United FC was the only team in the Knockout Stage of the eFootball.Pro Cup that didn’t feature in the top four of the standings after Matchday 5.” The game remained scoreless for a majority of the time, with the biggest chance being Barcelona’s penalty kick opportunity in minute 25’, which was skillfully defended by the English team’s representative, KAMS. The scoreboard read 0-0 until minute 76’ when The_Palma was able to score the opening goal of this second Semifinal matchup. Manchester United FC then chased the opportunity of achieving an equalizing goal, but were unable to reach this feat as The_Palma scored a second goal for the Blaugrana team, doubling the difference between the team’s points. The competition ended with the 0-2 result, earning Barcelona the first win of their Semifinal performance.

In the second game of the Semifinal, Barcelona’s main objective was to defend their two goal lead over their English opponents, in hopes of having the higher aggregate score to advance and face FC Bayern München in the eFootball.Pro Cup Final, to compete for the championship title. Manchester United FC was faced with the task of not only equalizing the score, but getting ahead of the Blaugrana team to avoid playing a third tie-breaker game, and to earn their chance of moving on to the Final. Both teams played skillfully and competitively, without either conceding a single goal throughout the entire game. This 0-0 result, however, put FC Barcelona’s aggregate score ahead of the English team’s, advancing them to the Final where they were set to face FC Bayern München. 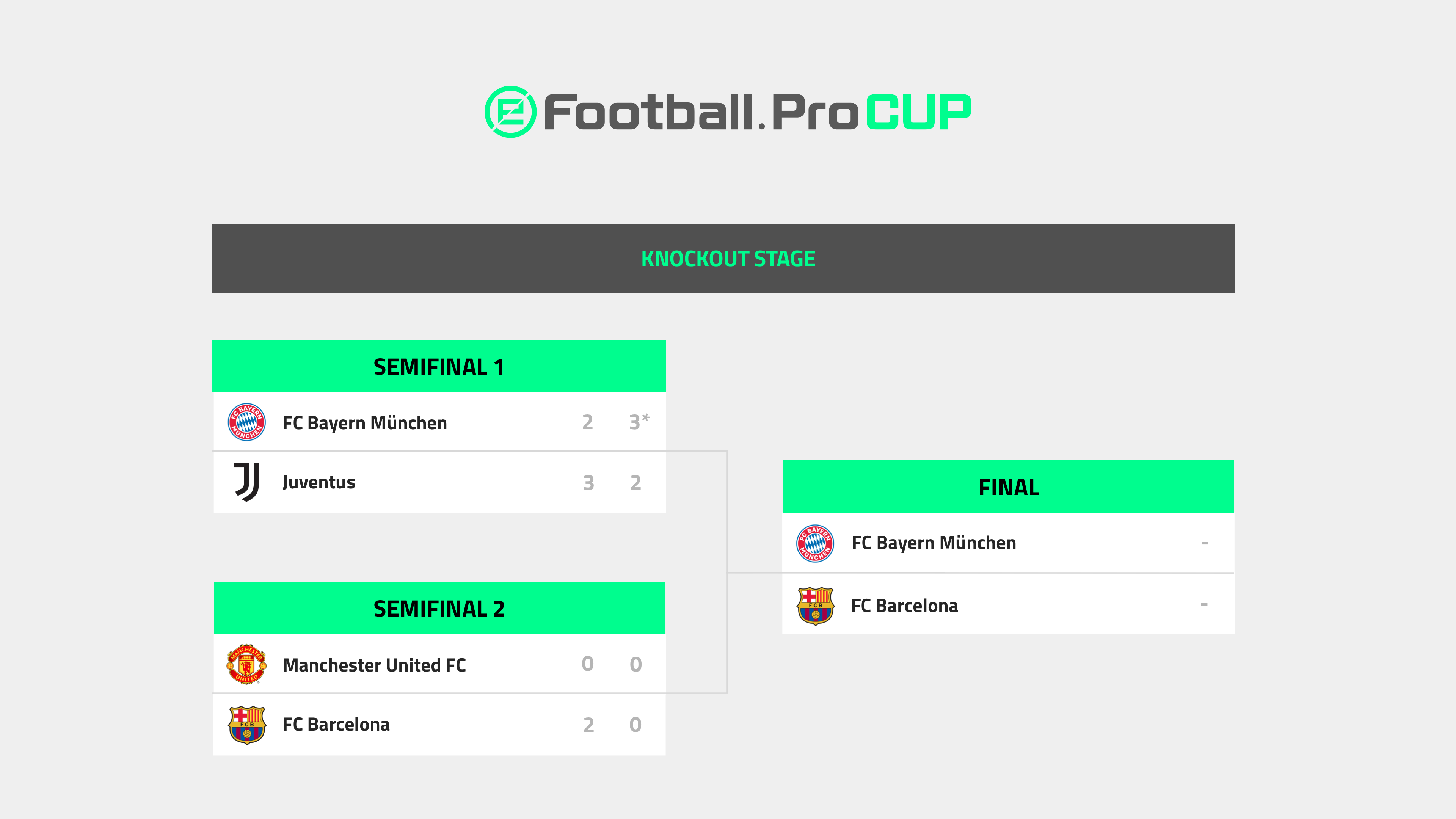 The eFootball.Pro Cup Final, with FC Bayern München facing FC Barcelona, was introduced by Channon claiming: “In terms of eFootballing royalty, it doesn’t get much better than this,” noting that the two teams have both shown tremendous form throughout the past three weeks of the Cup. Taking a look at the two teams’ past success rates when facing each other, Channon pointed out that the German club has a definite advantage, as they defeated the Blaugrana team in the Group Stage of the Cup, as well as in both games of Matchday 2 during the Regular Season. Continuing with his habit of scoring early in the Knockout Stage of this competition, Alex Alguacil carried on this new tradition by achieving his first goal of the Final in minute 6’. Harry Channon noted that putting his team ahead of Barcelona in the Final was “extra sweet” for Alex, as he played on behalf of his current opponents in the 2018-2019 eFootball.Pro season. The score stayed at 1-0 in favor of the German squad, despite various attempts by FC Barcleona to equalize the scoreboard. It was in minute 77’ that MESTRE solidified FC Bayern München’s win, bringing the final result to 2-0, making his team the winner of the eFootball.Pro Cup.

MESTRE recognized the hard work and talent of his team, stating: “I think this year we were the best of the league, so we wanted to show the world that. We did amazing work behind it.” The eFootball.Pro Cup was the German team’s chance to prove to fans what the rest of their performance in the Regular Season may have looked like, and what type of gameplay to expect from them in the future, as they emerge from the competition as the eFootball.Pro Cup champions. 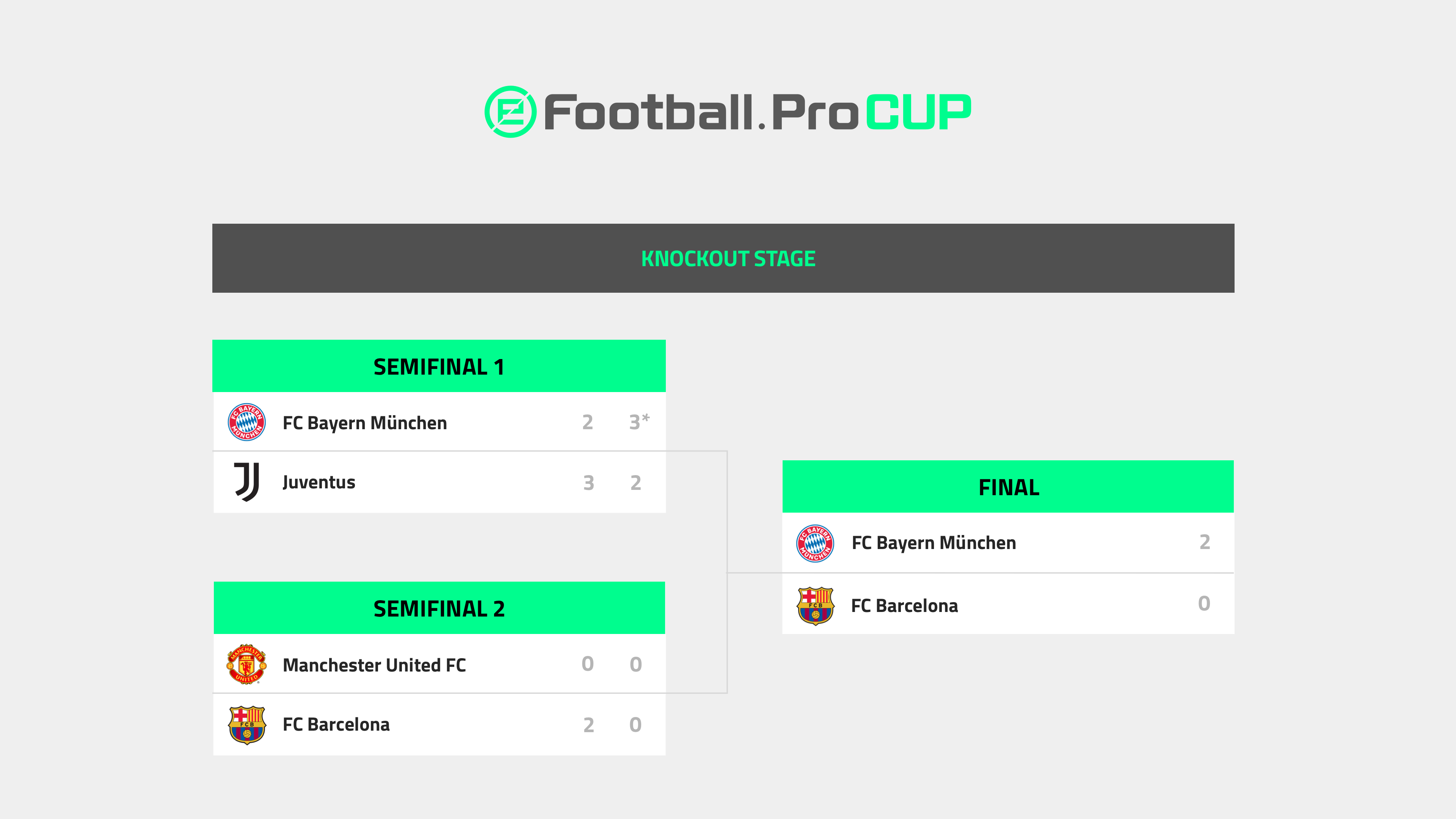