Take a moment to catch up on the gameplay of the first half of the eFootball.Pro IQONIQ 2020-21 Regular Season

The Blaugrana club opened the league in fourth place following one win and one loss against AS Roma. They maintained their spot on the league table through the second matchday, then catapulted straight to the top after an iconic competition against two-time reigning champions, AS Monaco, which earned FC Barcelona all six points. They then successfully defended their first place position with another two wins in the most recent matchday against Manchester United FC, currently putting them at 18 points, three ahead of any other club. In addition to leading the league in points, they also have accumulated the most goals scored throughout the past four matchdays, 24, with the next highest amount being 21. 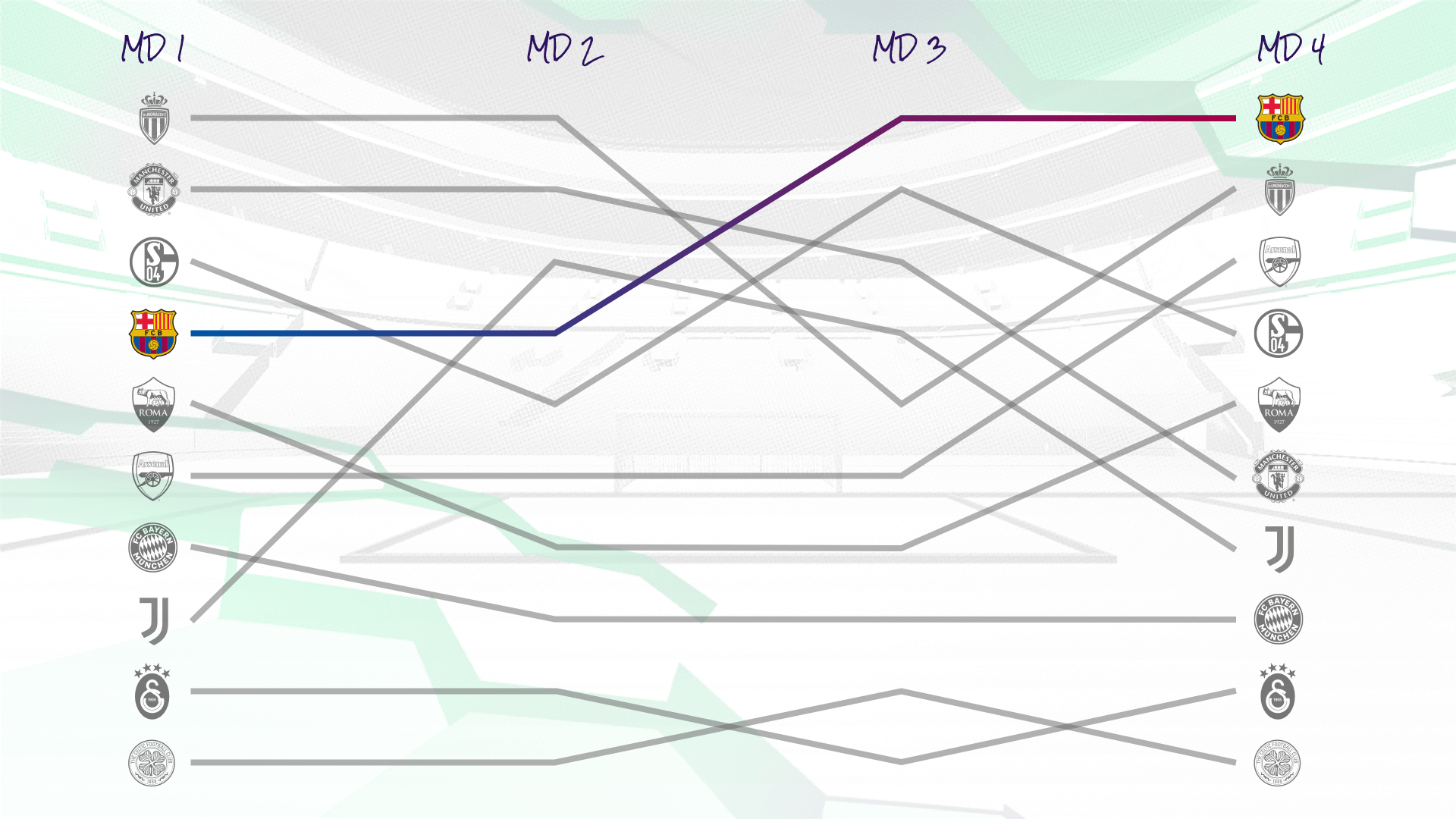 The Monegasque trio started off the 2020-21 season where they concluded the previous one, at the top of the league table. They were the only club in the first matchday to take all six points from their opponents, Celtic FC. Monaco maintained this position following the second matchday, however the third competition included unfortunate eFootball.Pro IQONIQ history for them as they were stripped of their first place title by FC Barcelona, falling all the way to fifth place. In an effort to regain their title, they were able to advance back up to second place after earning six points in Matchday 4. As a team, AS Monaco leads the league in assists (19), shots on target (40), and corner kicks (20). 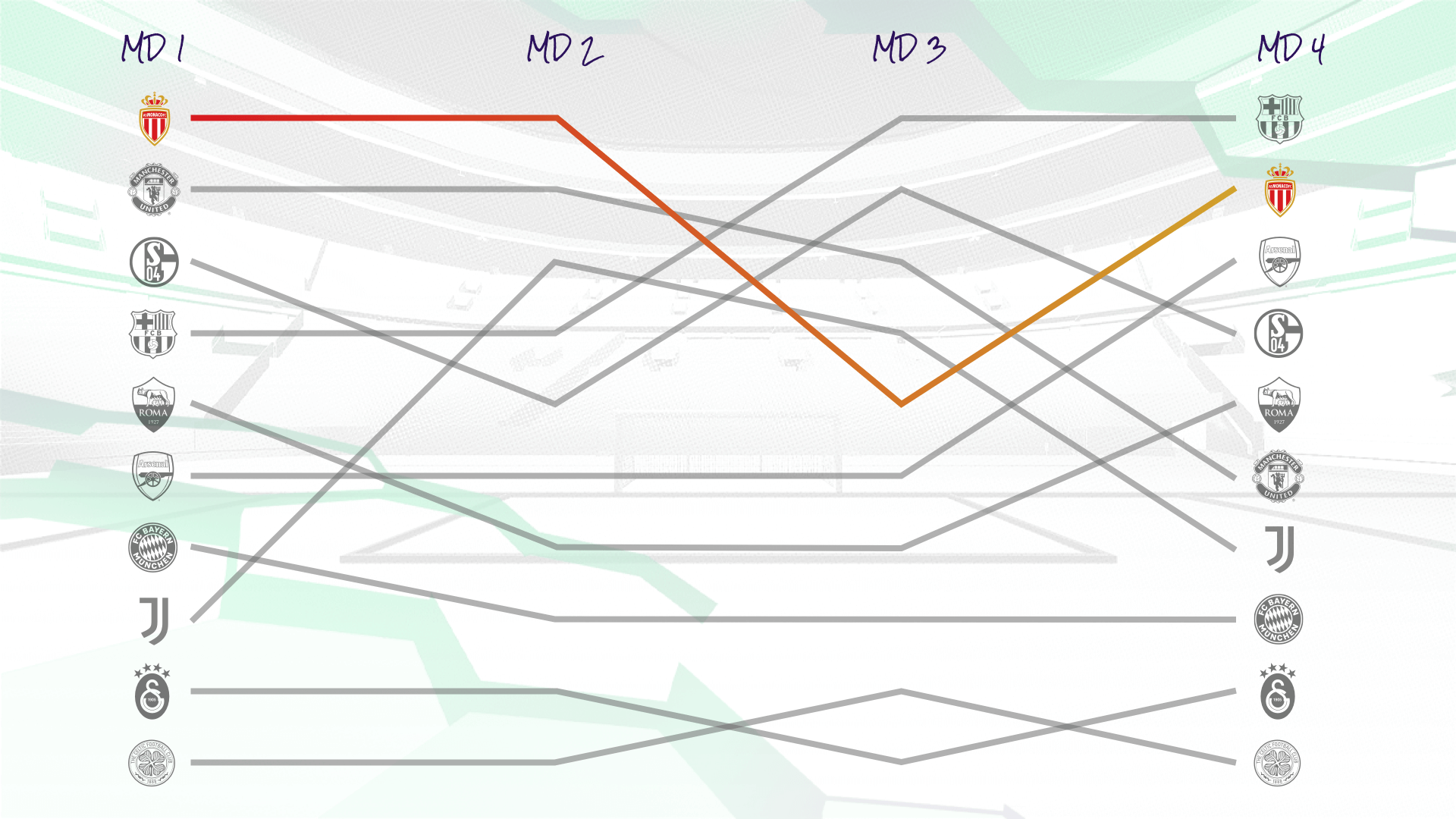 For the entire competition so far this season, the Gunners have remained ranked within Knockout Stage contention, although just barely in 6th place following the first three matchdays. They had equal amounts of wins and losses up against FC Schalke 04, FC Barcelona, and Manchester United FC, until Matchday 4, when they were finally able to take the majority of points against Juventus (4). This boosted the English club up to third place with thirteen points on the league table. They are the only returning club in the 2020-21 season to completely change their roster from the previous season. 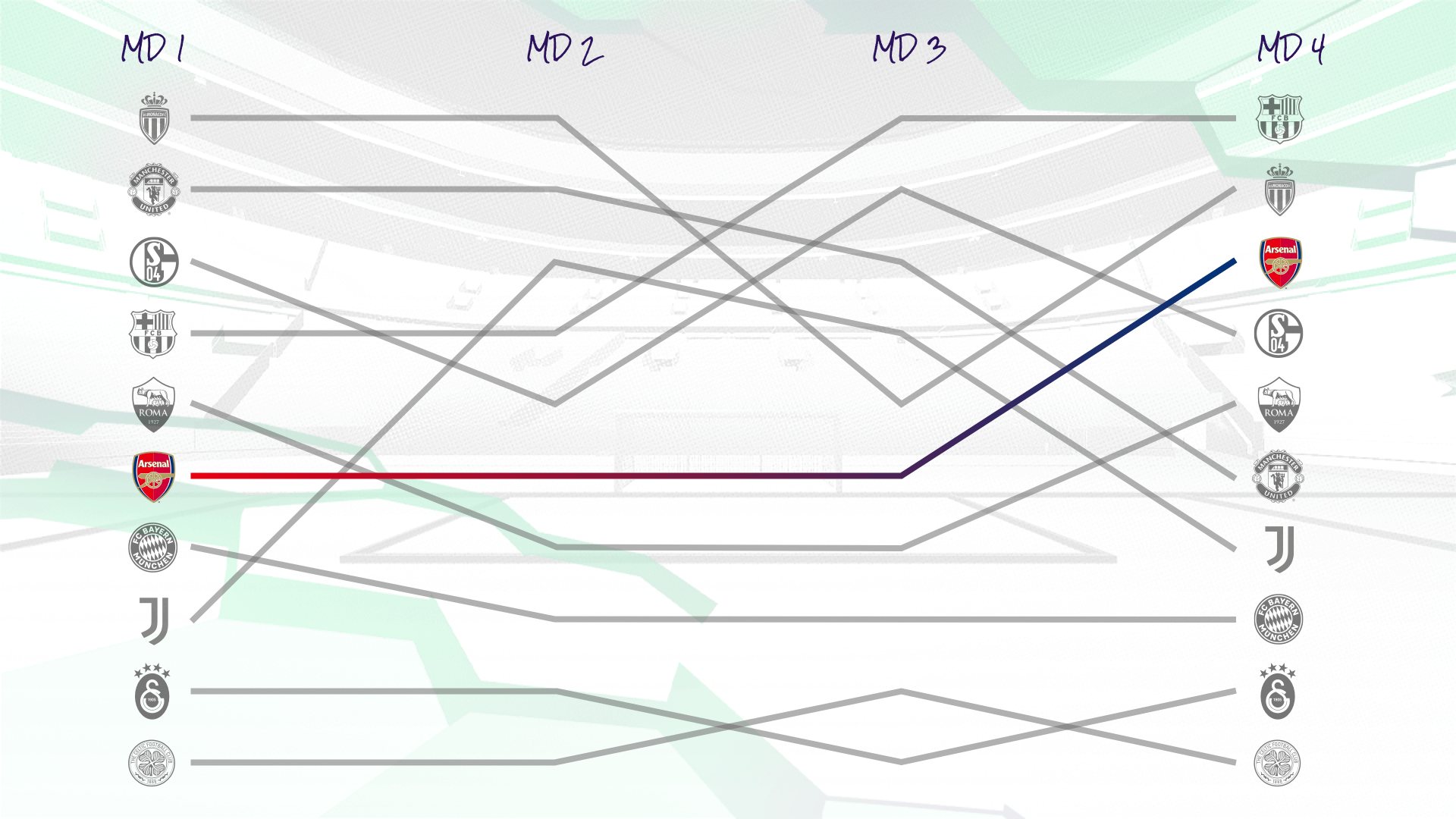 The German club has moved around on the league table, however never falling below the ranks necessary to qualify for the Knockout Stage. After concluding the 2019-20 season in 10th place, they commenced the current season in a much more favorable position, ranked third. They then fell to fifth place following the second competition, accumulating six total points alongside four other clubs. Schalke came out ahead of the third matchday in second place and tied with the first placing club in points (12), and are currently ranked fourth still with twelve points after being unable to gain any in their most recent fixture against AS Monaco. With 15 goals scored in their favor so far, they are tied with Juventus as the third highest scoring team. 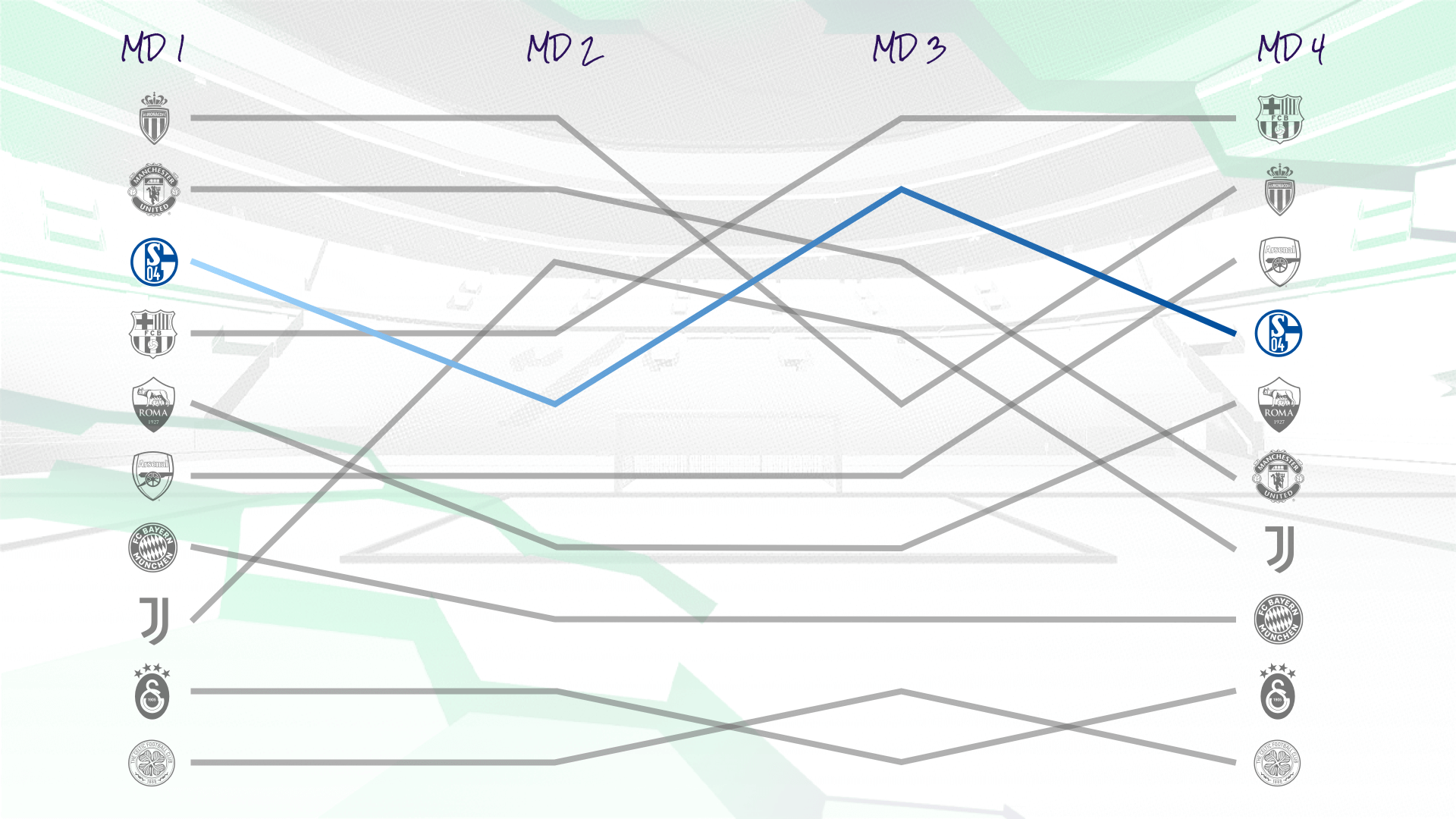 AS Roma is currently tied with fourth-placed FC Schalke 04 in points, with goal difference being the only factor determining their league table placement. As a new club in eFootball.Pro IQONIQ this season, they impressively placed within the top half of clubs following the first matchday, in fifth place. They fell just out of reach of a Knockout Stage contention qualifying position after Matchdays 2 and 3, but were able to regain their original position in fifth place by the end of the most recent competition. The Italian club is currently tied for the most saves with FC Bayern München, as both teams have accomplished 15 so far this season. They are also the team with the third highest number of shots on target (33), only behind AS Monaco (40) and FC Barcelona (36). 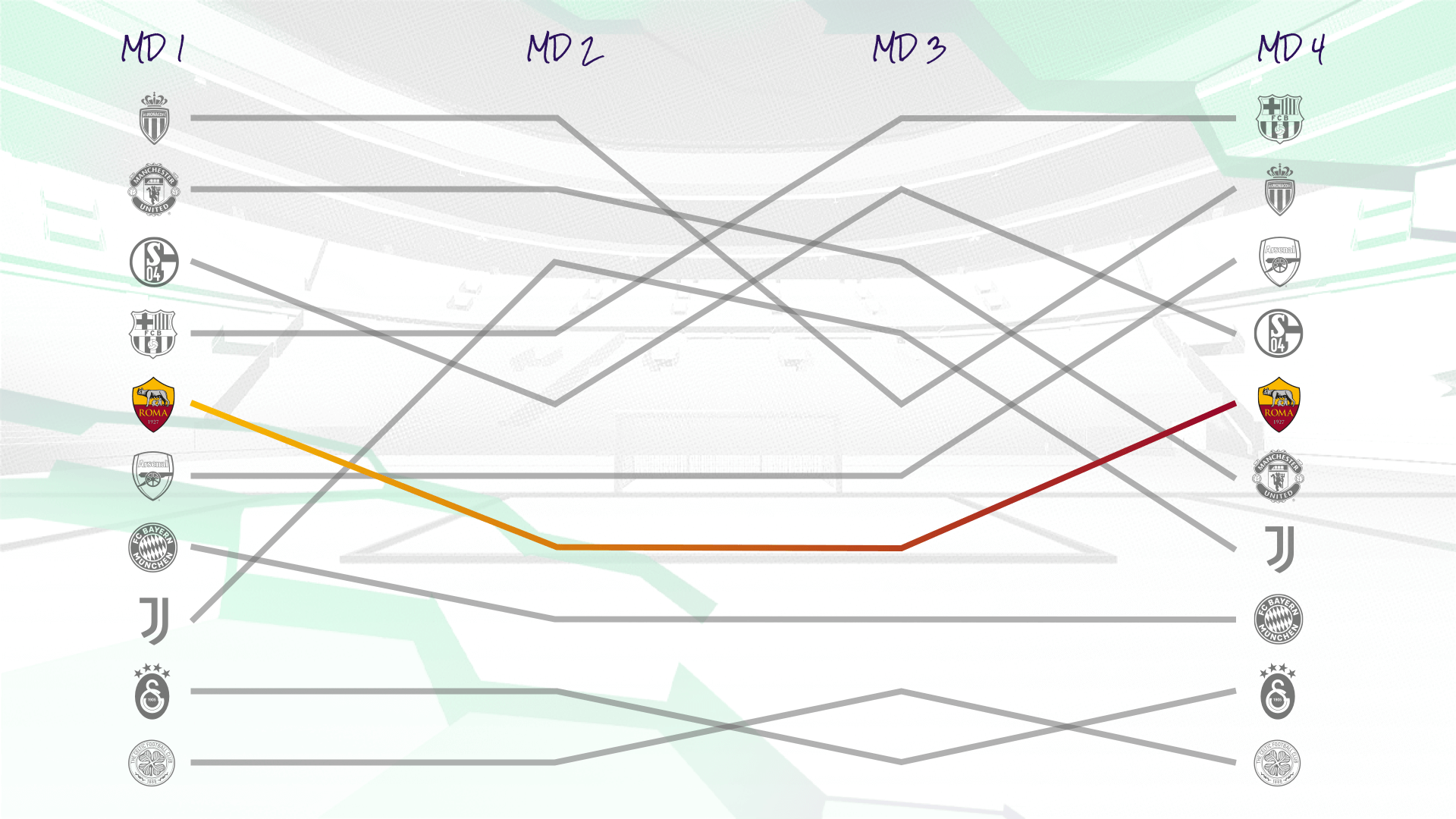 Manchester United FC started off the 2020-21 season ranked second, and only trailing behind AS Monaco’s first place position by one point. This position remained intact following Matchday 2, including the point difference with Monaco. They moved down one rank after the third competition, however still were only one point away from the first placing team. In Matchday 4 they experienced a surprise six point defeat at the hand of FC Barcelona, resulting in a zero point increase and a fall to sixth place on the league table. At this point in the competition they are still placed within Knockout Stage qualification with many opportunities left to rise back to their previous positions. 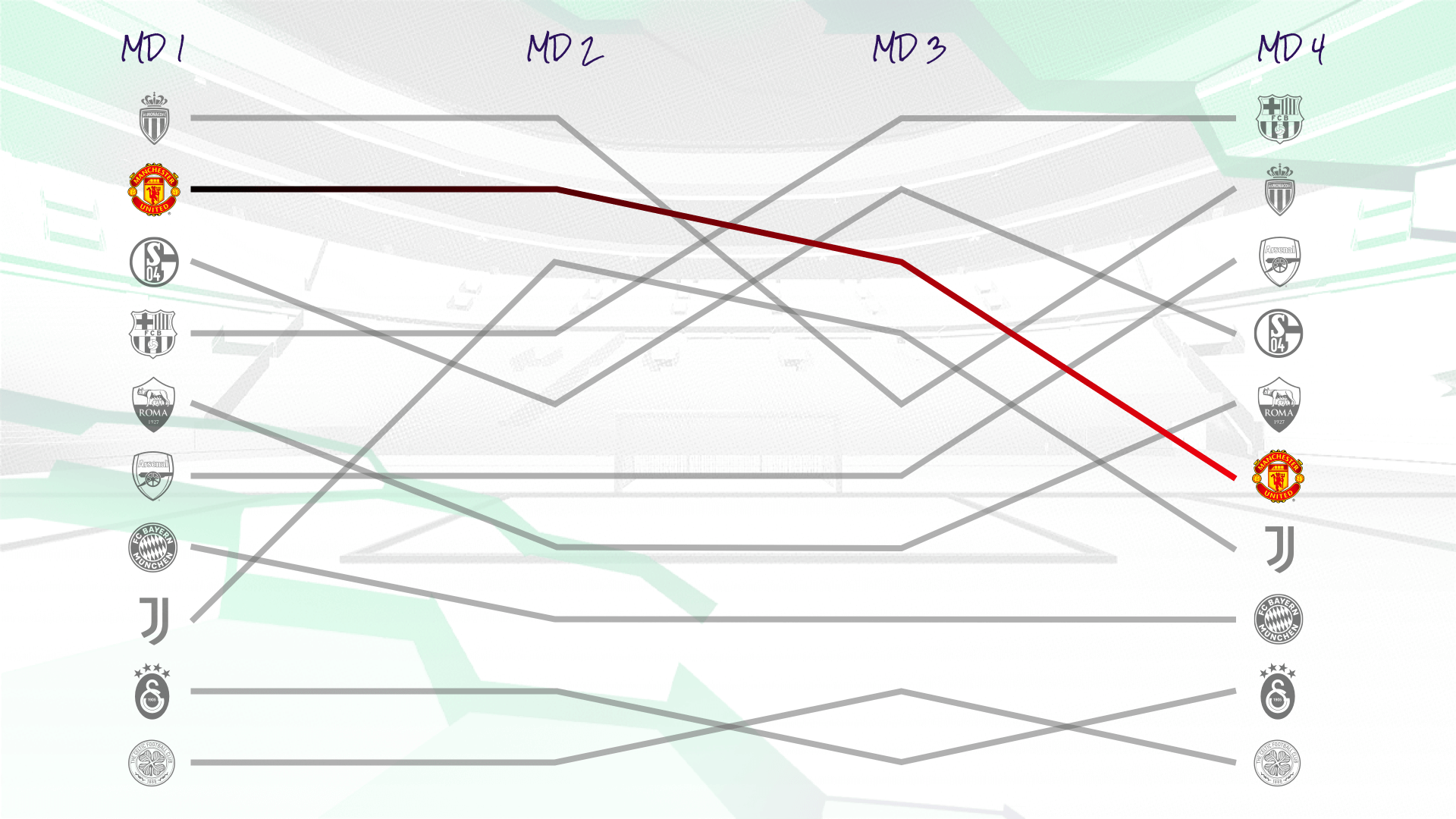 The Italian club has occupied various ranks on the league table throughout the Regular Season so far. They began this year’s competition in the bottom three positions, at 8th place following two draws against previous eFootball.Pro Cup champions FC Bayern München. They were able to boost their ranking to third place following Matchday 2, the same position they concluded the 2019-20 season at. Unable to maintain this rank, however, Juventus moved to fourth place in the next competition, and now sits at 7th place as clubs head into the second half of the season. They are currently tied for third highest goal scorers (15), lead the league in shots taken (52), and have conceded the least amount of goals so far (12). 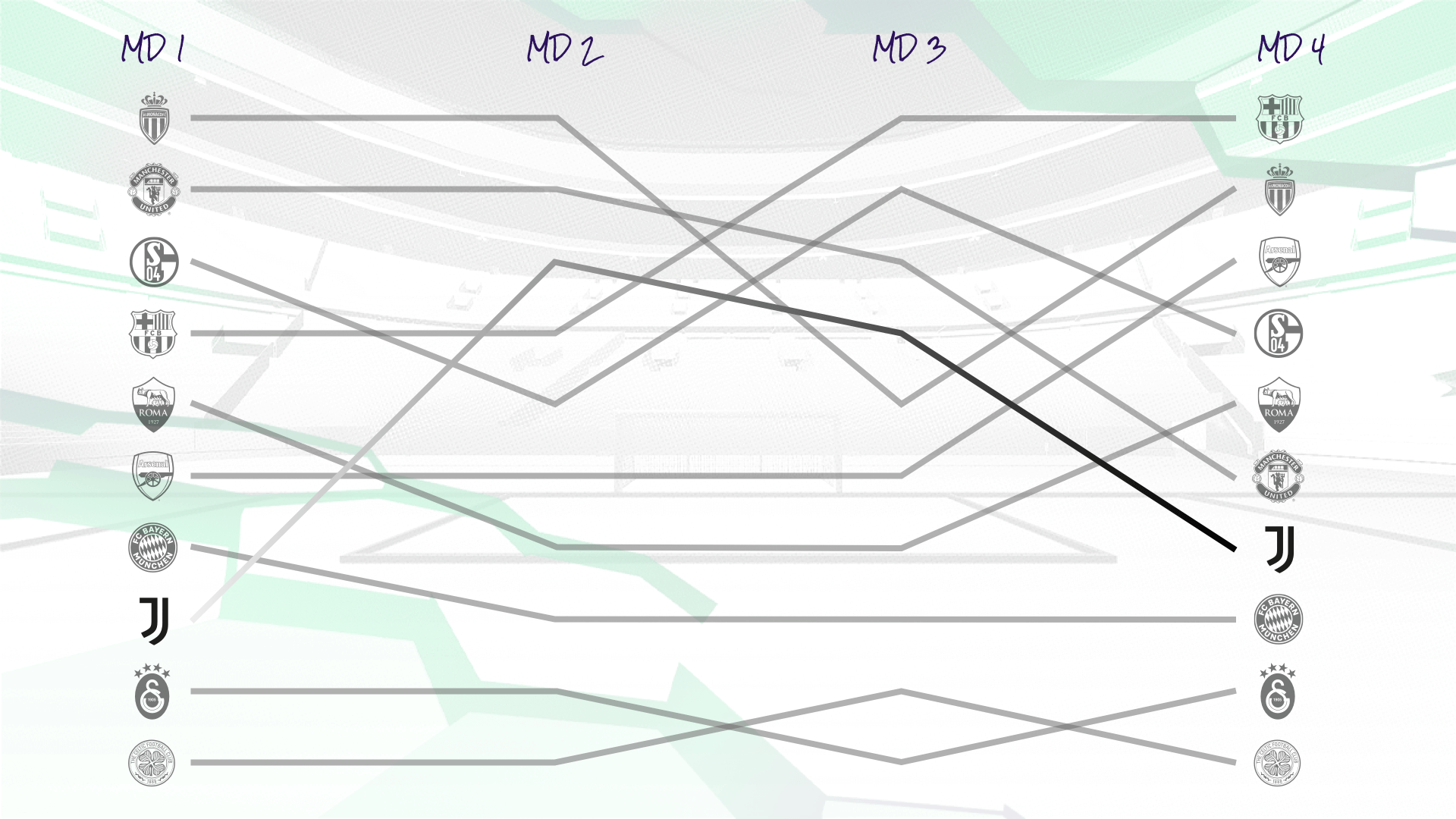 The reigning eFootball.Pro Cup champions have experienced an unfamiliar placement towards the bottom of the league table so far this season. Beginning the competition placed 7th, they were able to maintain this position after the next matchday until they moved down to the 8th rank following their performance in Matchday 3. They remain in this spot currently, however they began the 2019-20 season in the same rank as the current season’s and hope to move back up the league table as they did before. FC Bayern München is tied for the highest number of saves with AS Roma (15) and ranks third in assists (12). 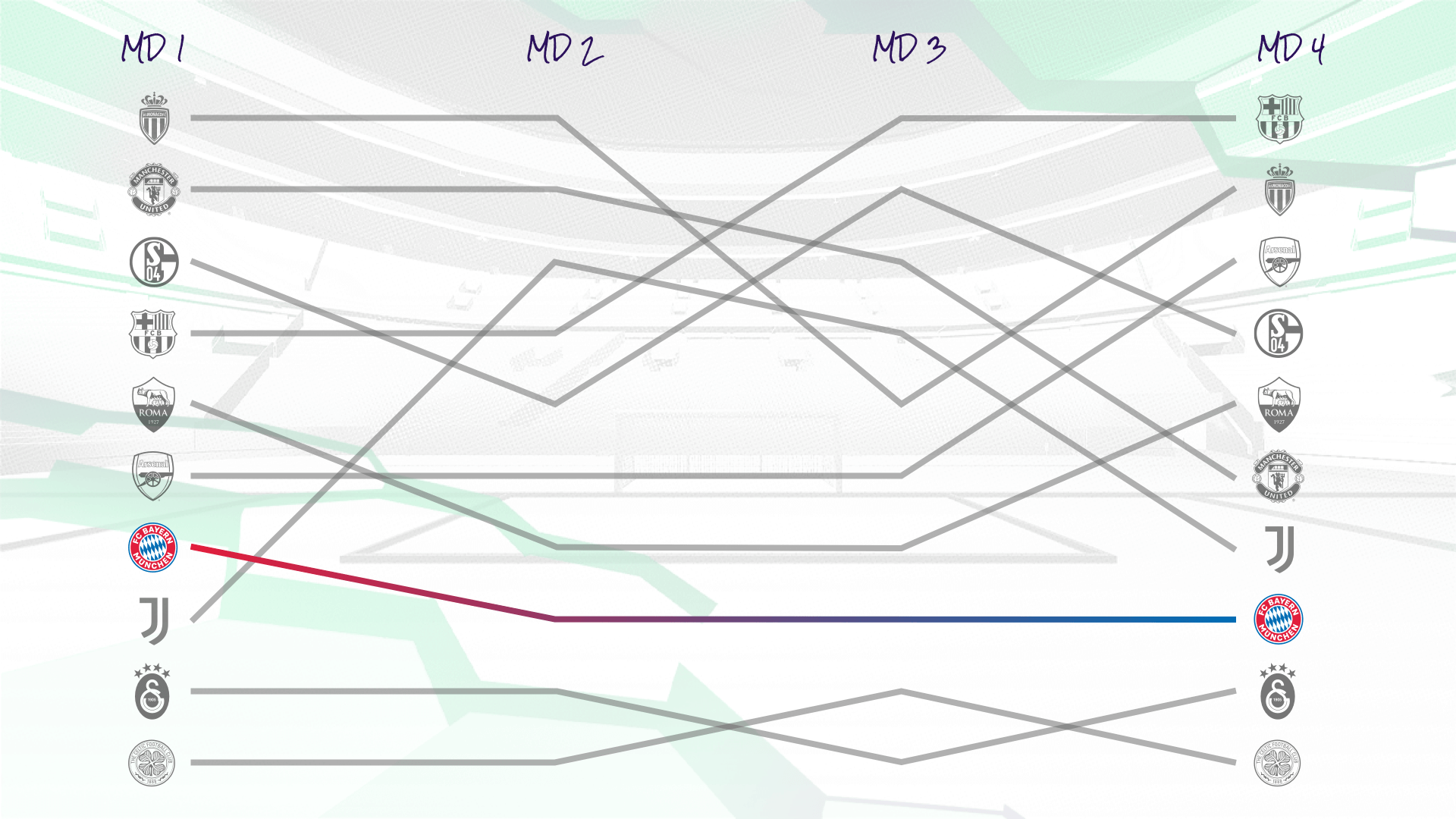 The Turkish club made their eFootball.Pro IQONIQ debut with a lineup constructed entirely of rookie players, being the only club this season to do so. They began their league career in 9th place after the conclusion of the first matchday, with one point on the league table that was the result of an own goal by Manchester United FC. After staying in their 9th place position for another matchday, they fell to last place following Matchday 3. They have entered this break in the season on a higher note, however, after rising back up one rank in Matchday 4 and achieving their first victory of the season, a 1-2 victory against Celtic FC. They are currently tied for the second highest number of saves with Celtic FC (13). 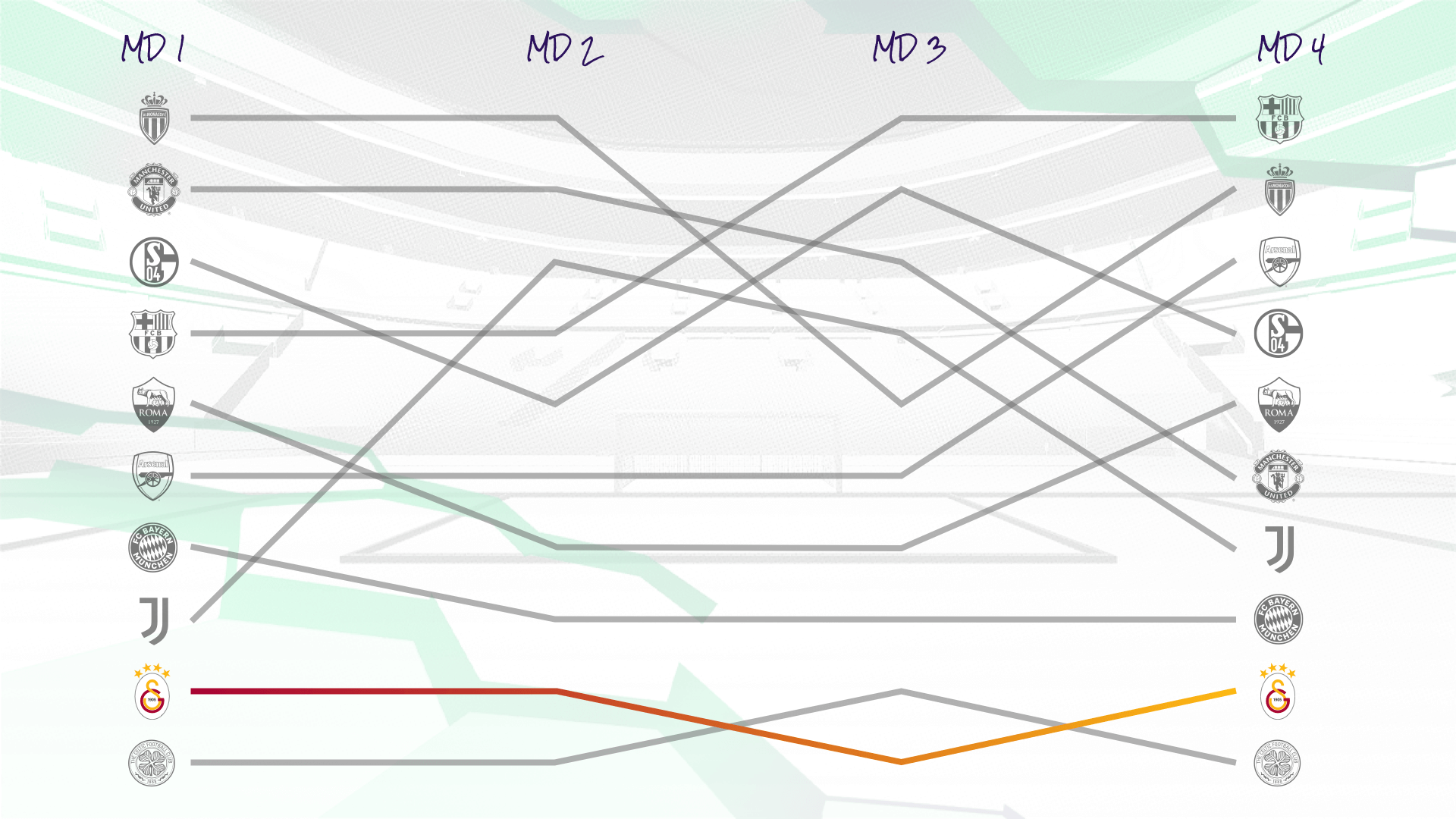 At the moment, the Scottish club is ranked 10th in eFootball.Pro IQONIQ, however very close to Galatasaray SK as both clubs have six points on the league table. Off to a slow start after the kick off of the season, Celtic FC was unable to gain any points during the first competition and was positioned last. They remained in this rank until the conclusion of Matchday 3, where they were able to achieve their first win of the season against FC Bayern München. This victory featured on goal by each of the three Celtic representatives, showcasing the talent possessed by the entire club. They are entering the second half of the Regular Season ranked last, however with enough points to potentially shake up the league table. 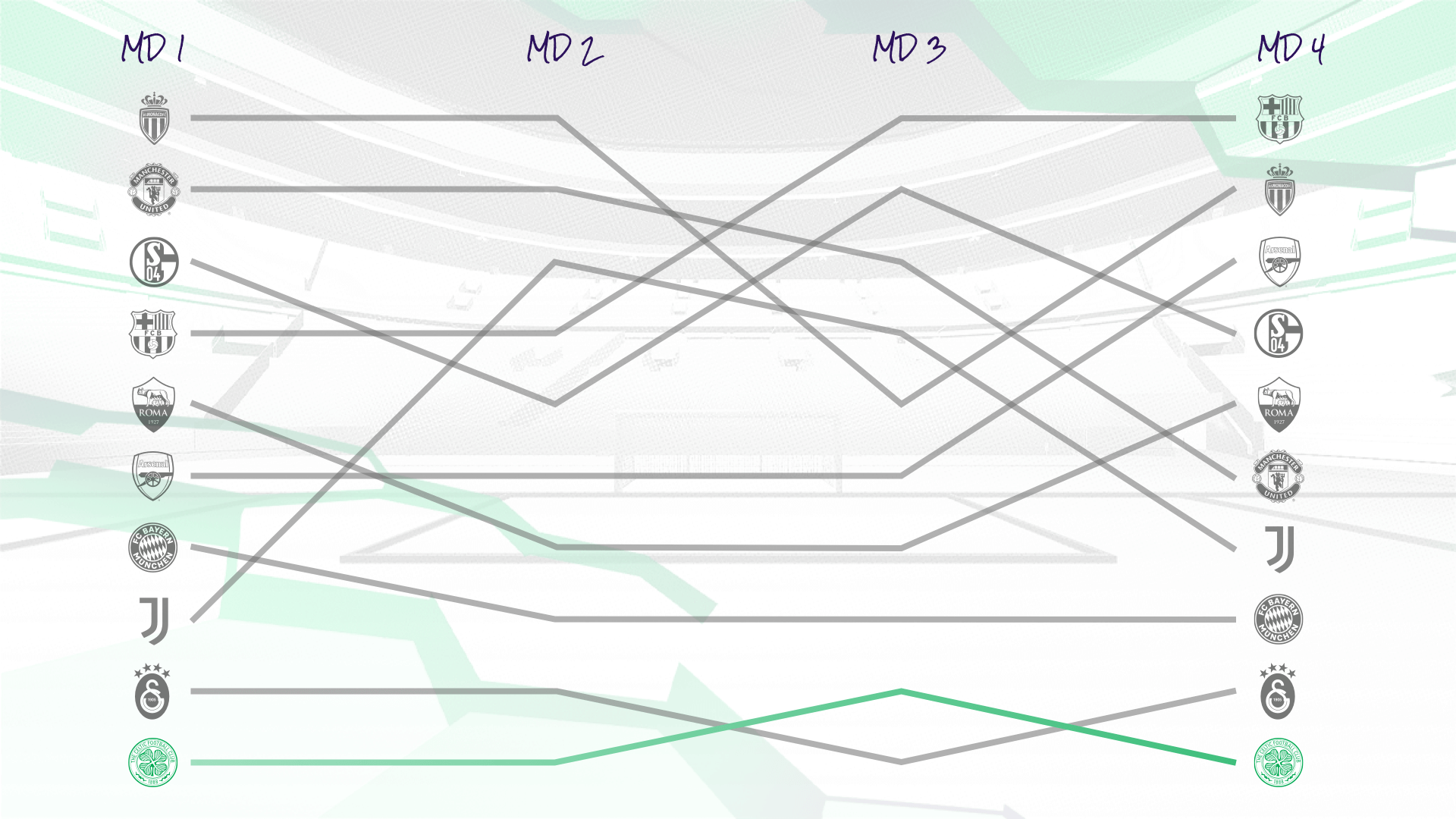