Day 1 of eFootball.Pro Cup Group Stage ends on an open note, as many clubs are still in KO Stage contention

Following the announcement of eFootball.Pro’s cancellation for the rest of the 2019-2020 season, Day 1 of the eFootball.Pro Cup Group Stage was the first time fans had the chance to see their favorite clubs compete against each other in 3v3 format, this time online. The ten teams are competing for a prize pool totaling €250,000. The outcome of the first day of this competition included expected gameplay, with some unexpected wins and losses, and the opportunity to advance remains for almost all of the clubs. 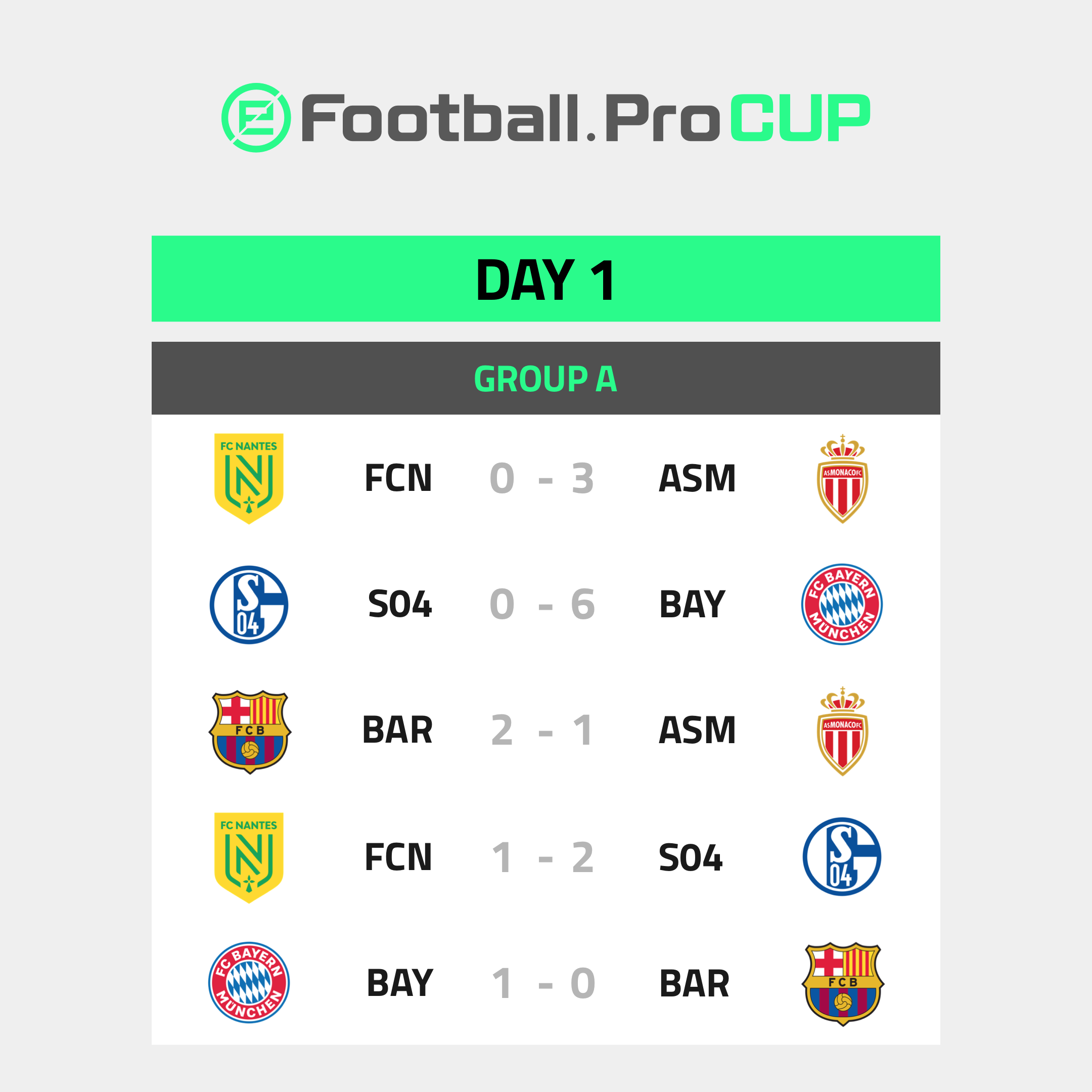 In the first day of the Group Stage for Group A, the competition began with a matchup between FC Nantes and AS Monaco. The game quickly started in the Monegasque team’s favor, with a goal by ASM Usmakabyle in minute 7’ of the game. As the game continued, the team captain went on to score two additional goals against his French opponents, completing the first hat trick of the eFootball.Pro Cup and being the sole contributor to the ultimate score of 0-3 for the first game.  The game to follow was also a shutout game, this time for FC Bayern München as they faced fellow German competitors, FC Schalke 04. The game began with a goal scored in minute 11’ by MESTRE, followed closely with a goal by team captain JOSE in minute 24’. The two players alternated scoring goals until the score reached 0-6, the highest score reached by any team that day, in minute 75’, with both players achieving hat tricks.

The third matchup of the day was the highly anticipated game between FC Barcelona and AS Monaco. The last time the two faced each other was in the most recent eFootball.Pro match, when FC Barcelona managed to strip their competitors of their undefeated title. Spectators have been waiting to see if the impressive gameplay could be replicated, and give another team a change to win the eFootball.Pro Cup. Captain of the Blaugrana club, GuiFera, achieved two goals, in minute 21’ and 32’, before any of the other players were able to equalize the score. ASM Kilzyou managed to strike back with a goal in minute 75’, bringing the score to 1-2, but the Monegasque squad was unable to continue with that momentum and lost to FC Barcelona once again.

The fourth game from the Group A teams was between FC Nantes and FC Schalke. With both teams ending their first games in shutout losses, players from both sides felt that they had to redeem their teams’ reputations. EL_MATADOR was the first player to score, bringing the score to 0-1 in favor of the German club in minute 43’. Aazbabysk then equalized the score in minute 77’, giving FC Nantes a chance to get ahead of their competitors and leave the first day of the competition with points on the table. This chance was taken by FC Schalke 04, however, in minute 90+1’ by captain, Meromen, awarding the win of the closely fought game to his team. The final game from Group A was between FC Bayern München and FC Barcelona. Alex Alguacil scored the only goal of the matchup in minute 33’, leading the German team to their second win of the day, with all three of the team’s representatives having scored at least once throughout Day 1 of the eFootball.Pro Cup Group Stage. They were also the only team in Group A to not concede a single goal to their competitors. 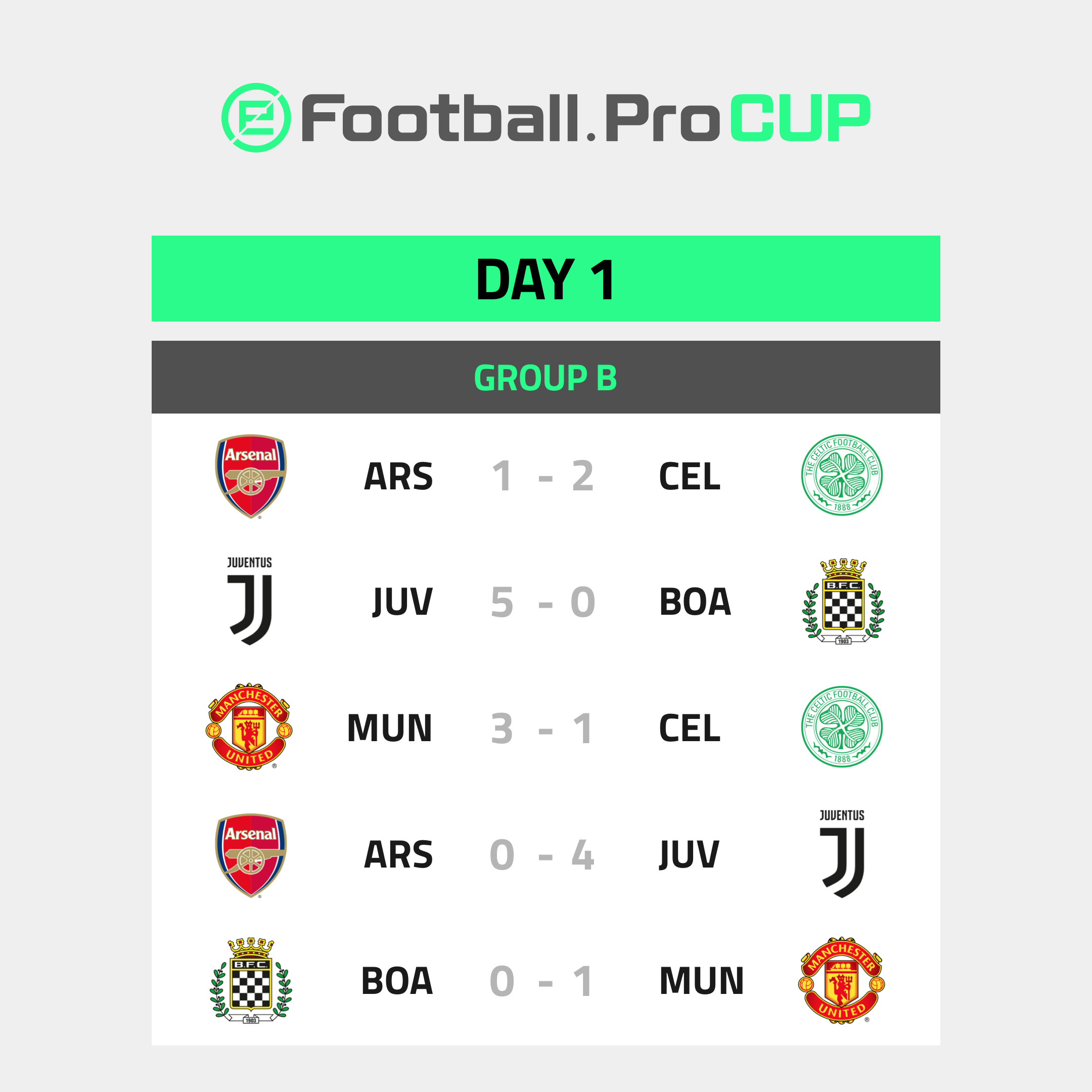 Arsenal FC and Celtic FC were the first two teams to face each other from Group B in Day 1 of the eFootball.Pro Cup Group Stage. The two ended the Regular Season ranked closely at 7th and 8th place, with the English club only one point ahead of the Scottish team. The game began with a goal by INDOJAWA in minute 34’, bringing the score to 0-1 where it remained for over 50 minutes of the competition. Alex Grd then equalized the game for Arsenal FC with a skillful shot in minute 86’, leaving time for his team to get ahead and take the three points. The competition was determined in minute 90’, however, by team captain INDOMINATOR, who brought the game in favor of Celtic FC, 1-2, resulting in a win for his team. The next game left spectators with less difficulty determining who would come out on top, with Juventus facing Boavista FC. The scoreboard was brought in favor of the Italian team quickly at 1-0, with LoScandalo scoring in minute 17’. This shot was followed by Ildistuttore doubling the amount of goals in minute 39’, then by an extremely skillful hat trick by team captain ETTORITO97, who scored three goals consecutively, including two goals within five minutes of each other, making the final result of the game 5-0.

Manchester United FC and Celtic FC made up the third matchup for Group B. These teams also landed closely in the league rankings at the conclusion of the regular season. The Scottish team was placed 8th, while the English team placed 9th, however both teams had ten points each, showing just how close the competition was between the two. OSTRYBUCH was the first to score in minute 25’, followed by his teammate and captain, E_c_oneill, who scored a second goal for Manchester United FC in minute 48’. Celtic FC made an effort to get closer to an equalized score in minute 67’, with a goal by JORCHA bringing the score to 2-1. E_c_oneill was quick to defend his team and solidify the win with another impressive shot in the following minute, elevating the overall outcome to 3-1 in favor of the English squad.

Following an iconic first performance, Juventus kept playing with the momentum they had created in their previous match, and beat Arsenal FC in their second shutout victory of the day. The game began almost immediately in favor of the Italian team, with LoScandalo’s first goal of the game in minute 6’. This was followed by two goals by ETTORITO97, and another by LoScandalo, ending the game with a score of 0-4, preventing Arsenal FC from achieving even a single goal. While Ildistruttore wasn’t able to get on the board with a goal of his own in the second game, he did achieve the impressive feat of completing a hat trick of assists. This further proves the skill possessed by Juventus players, without conceding a single goal throughout both games while also scoring nine goals of their own. The final game of the day was a faceoff between Boavista FC and Manchester United FC. It was a closely played game, with both teams refusing to allow a goal until minute 75’ when OSTRYBUCH was able to outplay the Portugese defense and score the only goal of the game, resulting in a win for the English club.

With an exciting beginning of the eFootball.Pro Cup, including back-to-back hat tricks in the first two games, fans saw impressive shutout games and high scoring competition. Juventus, Manchester United FC, and FC Bayern München are all undefeated going into Day 2 of the Group Stage. FC Barcelona is currently in Knockout Stage contention as well, but AS Monaco and FC Schalke 04 aren’t far behind, all three teams with three points at the conclusion of Day 1. FC Nantes was the sole team in Group A to be defeated in both games, and are not in position to place themselves in Knockout Stage contention. Celtic is closest to moving into an advancing position with three points, while Arsenal FC and Boavista FC have been placed lower in the rankings with zero points as they move into the second day of competition and are less likely to advance.