A look at the first half of the eFootball.Pro 2019-2020 Regular Season

As the league moves into the second half of the Regular Season, take a look back at which teams have dominated, shown improvement, or fallen behind

As the eFootball.Pro 2019-2020 season commenced, points were concentrated with the few top placing teams in the league. This changed as the season continued to progress, with the three teams currently closest to Knockout Stage qualification, Arsenal FC, Celtic FC, and Manchester United FC, sitting within only two points of the nearest qualified team, FC Nantes. Goal difference has been a clear indicator of success for teams, with Boavista FC being a clear outlier ranked at 5th place in the league, but with the second worst goal difference (-9). FC Bayern München continues to chase AS Monaco’s unwavering first place ranking, now with only a one point difference as they advance to Matchday 6, where they will compete against the Monegasque club.

AS Monaco are the reigning champions of the eFootball.Pro league, after defeating Celtic FC in the Finals of 2018-2019. They have continued to defend their first place ranking since Matchday 1, where they set the scene for their continued domination throughout the first half of the Regular Season. The team had remained undefeated until Game 2 of the most recent competition, Matchday 5, where they lost to FC Barcelona. They currently lead the league with the most goals scored, 28, which is far ahead of the next highest team being FC Nantes with 19 goals. AS Monaco also leads the league with 26 assists, 16 being the next highest amount from competitor, Juventus.

The team includes two players from the previous championship season, with the addition of the second youngest player in the league, ASM Kilzyou, who has already won MVP for Matchday 1 and is currently the top scorer in the league with 12 goals. Team captain, ASM Usmakabyle, also won the MVP award for his performance in Matchday 3, and has provided the most assists (11) at this point in the Regular Season. 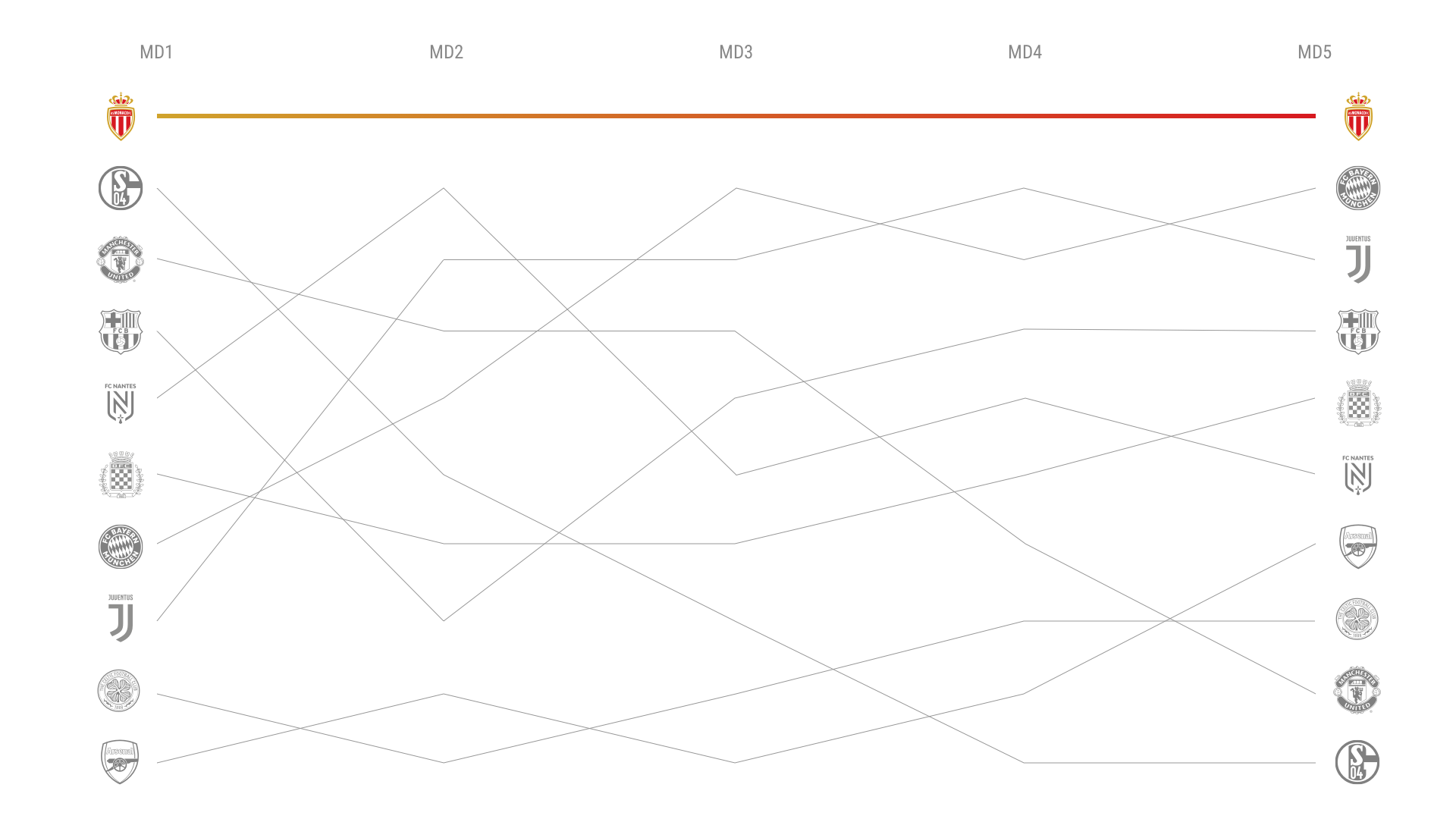 FC Bayern München is currently the top competition for league leading AS Monaco, sitting in the number two position of the eFootball.Pro league rankings. They are competing for the championship title during this team’s first season playing in the league. While they were ranked seventh after the first matchday, they have continued to prove their place in this competition by remaining in the top five rankings for the remainder of the first half of the Regular Season. 2018 European runner-up, MESTRE, was awarded the best goal of Matchday 2, when the team won both games against FC Barcelona. Only trailing AS Monaco by one point, and with both teams at six wins halfway through the Regular Season, the games between FC Bayern München and AS Monaco in upcoming Matchday 6 are highly anticipated. 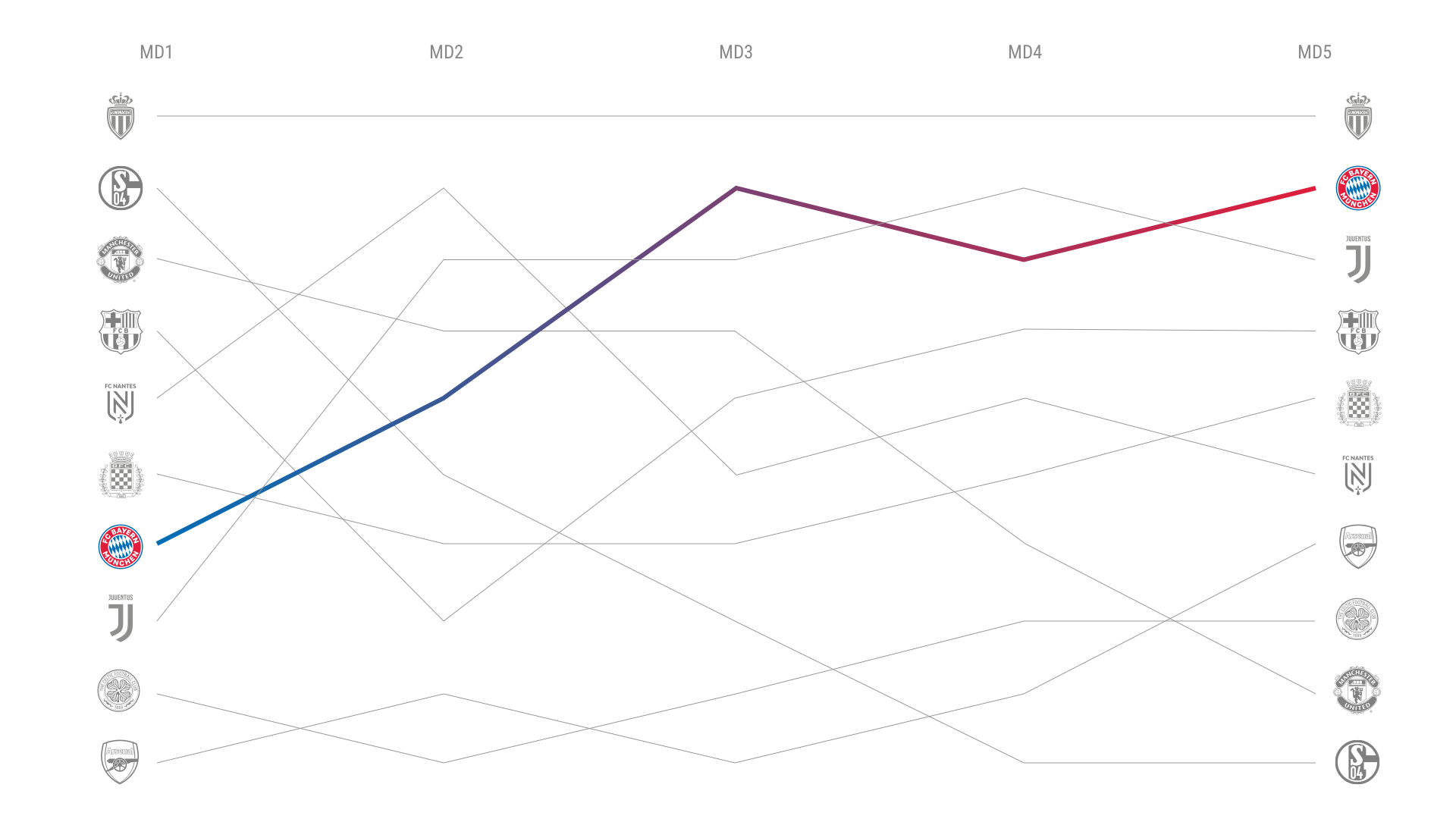 Juventus is competitively ranked as third in the eFootball.Pro league at this point in the competition. They also started low in the rankings after their performance in Matchday 1, but quickly rose in the following matches. The team has managed to remain ranked within the top three spots in the league for the rest of the first half of the Regular Season.

The Italian team includes ETTORITO97, who is considered one of the most talented players in the league and was recognized earlier in the season with the MVP award for his gameplay in Matchday 2. Winning the Pro Evolution Soccer World Championship in 2011 at just 14 years old, he has continued to prove his reputation as one of the best players in the world. 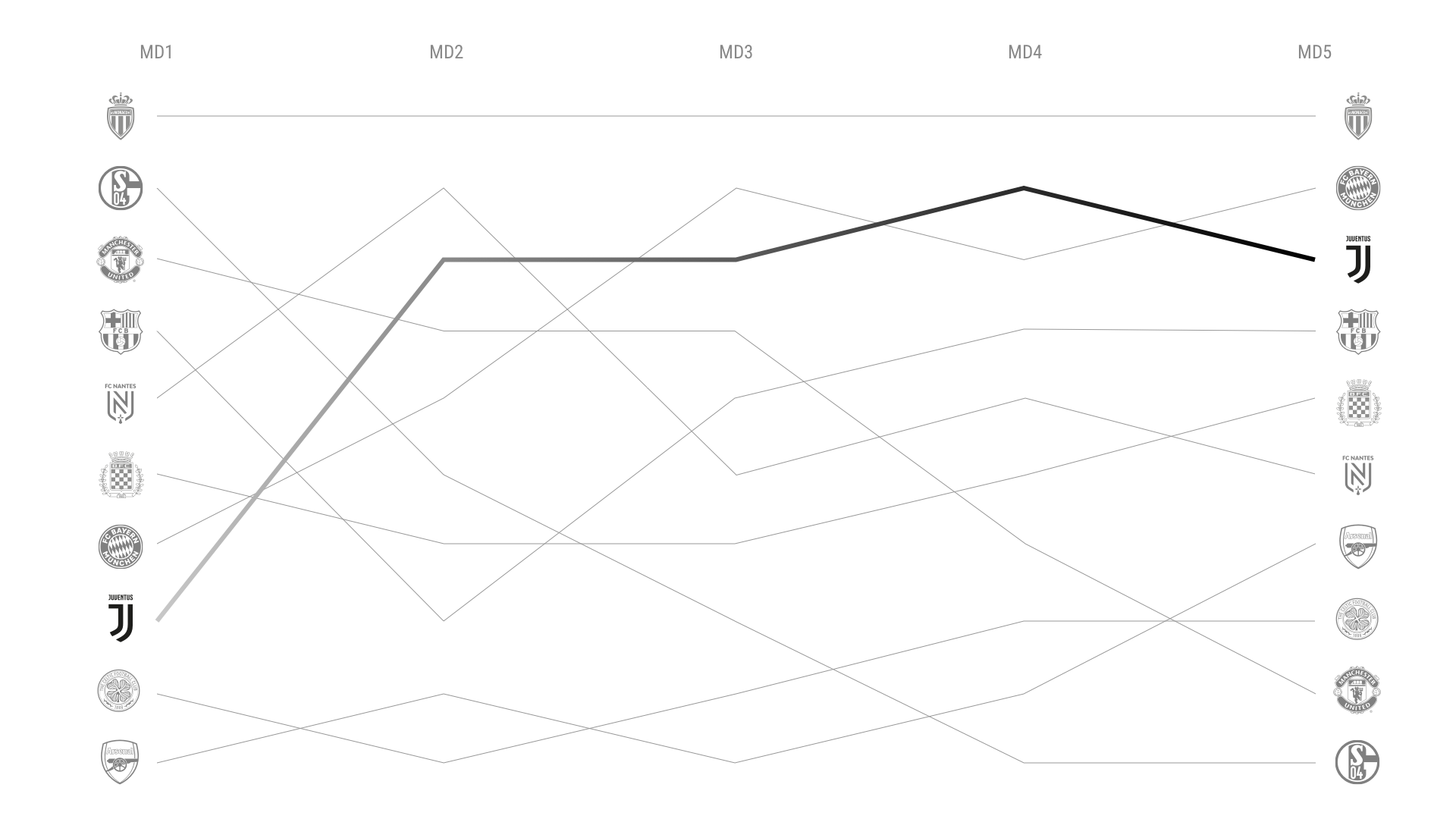 Trailing Juventus by only two points, FC Barcelona has remained in the league’s top five rankings for the majority of the season to date. The team is currently ranked fourth, and is well positioned to qualify for the Knockout Stage if they continue to perform at this level. They have only experienced three losses throughout the first half of the Regular Season, two to FC Bayern München in Matchday 2, and one to AS Monaco in Matchday 5. FC Barcelona is the only team so far that has won a game against the previously undefeated AS Monaco, where they were able to pull ahead of the Monegasque team 4-2 in Game 2 of the fifth matchday. After making it to the semifinals of the 2018-2019 eFootball.Pro season, the team hopes to continue to advance with their experienced players. These PES players include HenryKinhO, who was presented with the MVP award for his performance in Matchday 4, 2019 PES League finalist The_Palma, and well-known team captain GuiFera, who was victorious both in the 2017 World Championship 1v1 and the CO-OP category in 2019. 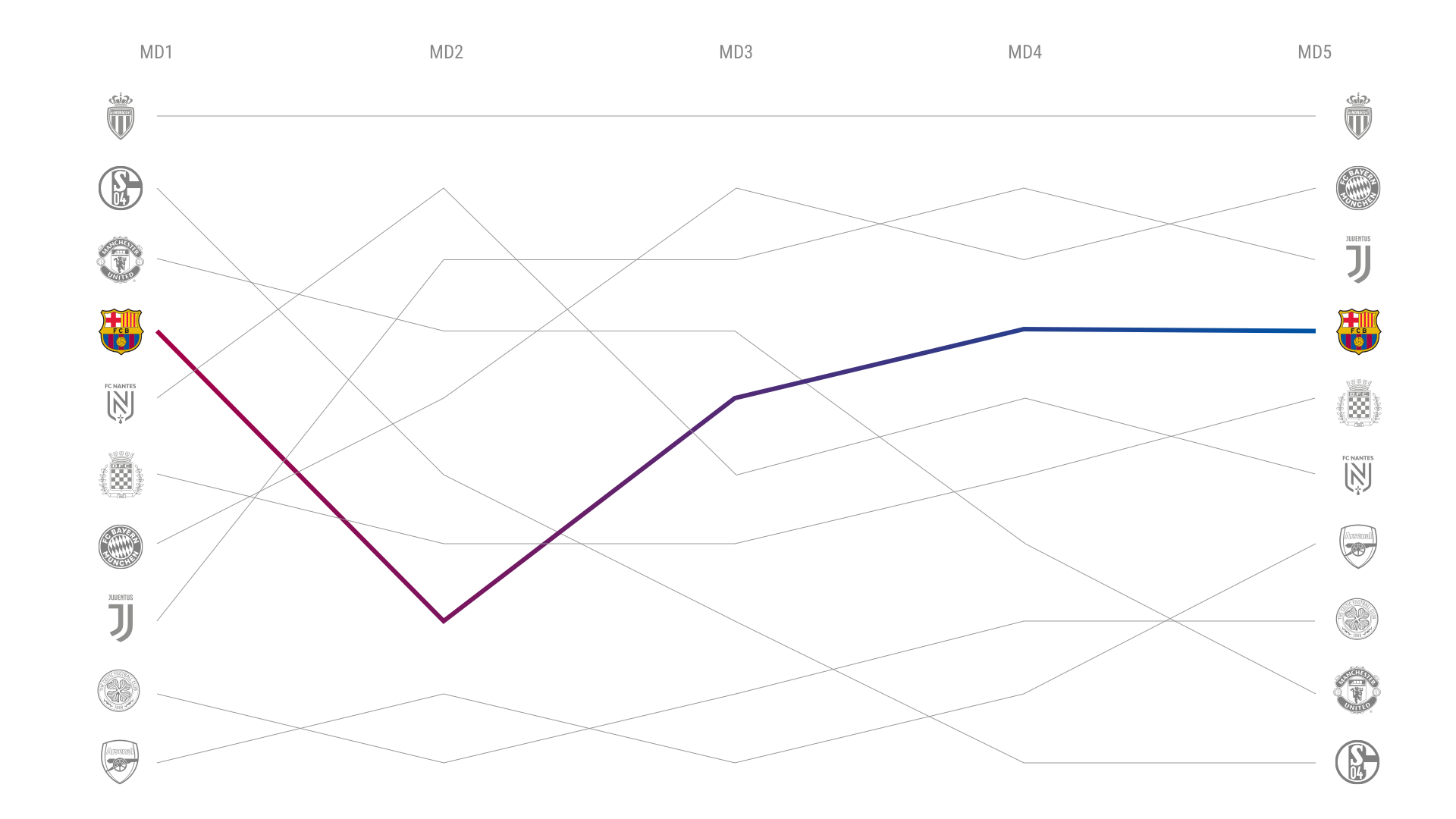 Boavista FC has proven their talent as they have continued to rise in the league rankings for the past four consecutive matchdays, currently landing them in fifth place as the first half of the Regular Season concludes. While the team was a competitor during the 2018-2019 season of eFootball.Pro, this season it is made up of an entirely different group of players. Barboza, Joker, Juniin, and YIOU are all first time competitors in the eFootball.Pro league. Team captain, Barboza, is currently ranked as the best defensive player in the league. As the Portuguese team continues into the second half of the competition, they recognize that the other teams are talented competitors in a “tough league”, and they need to continue showing improvement in order to defend their current position and advance to the Knockout Stage. 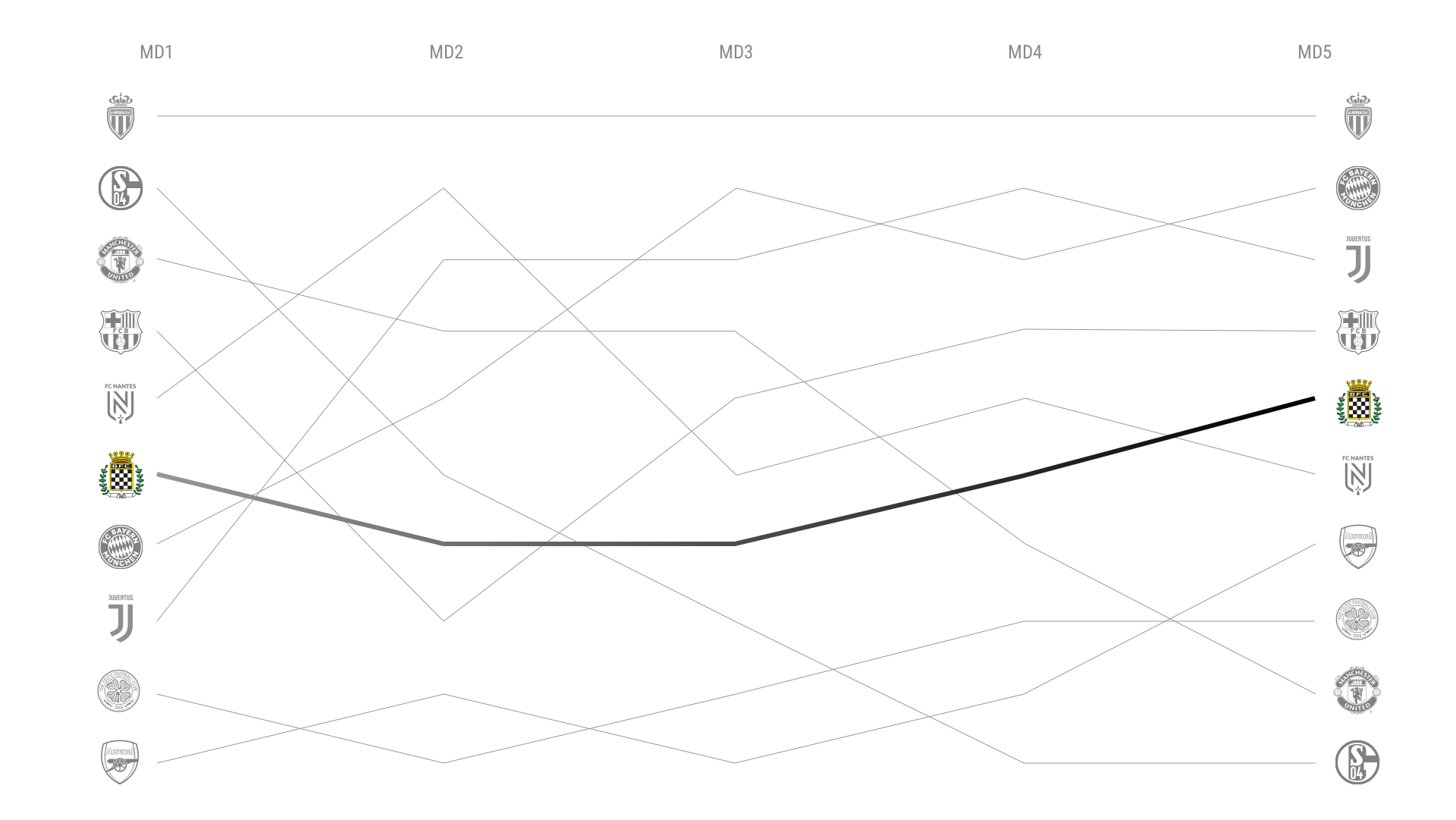 FC Nantes has remained ranked in the top six teams for the entirety of the season to date, keeping them in place to qualify for the Knockout Stage. The French team leads the league in the most shots on target, with Kepa making the most vital passes of any player throughout the first half of the Regular Season. The Serbian champion also won the award for best goal of Matchday 3 during the second game, where the team faced their first ranked competitors, AS Monaco. Currently sitting in sixth place, they need to defend their position in order to qualify for the next stage of the competition, with hopes of advancing to the Finals. 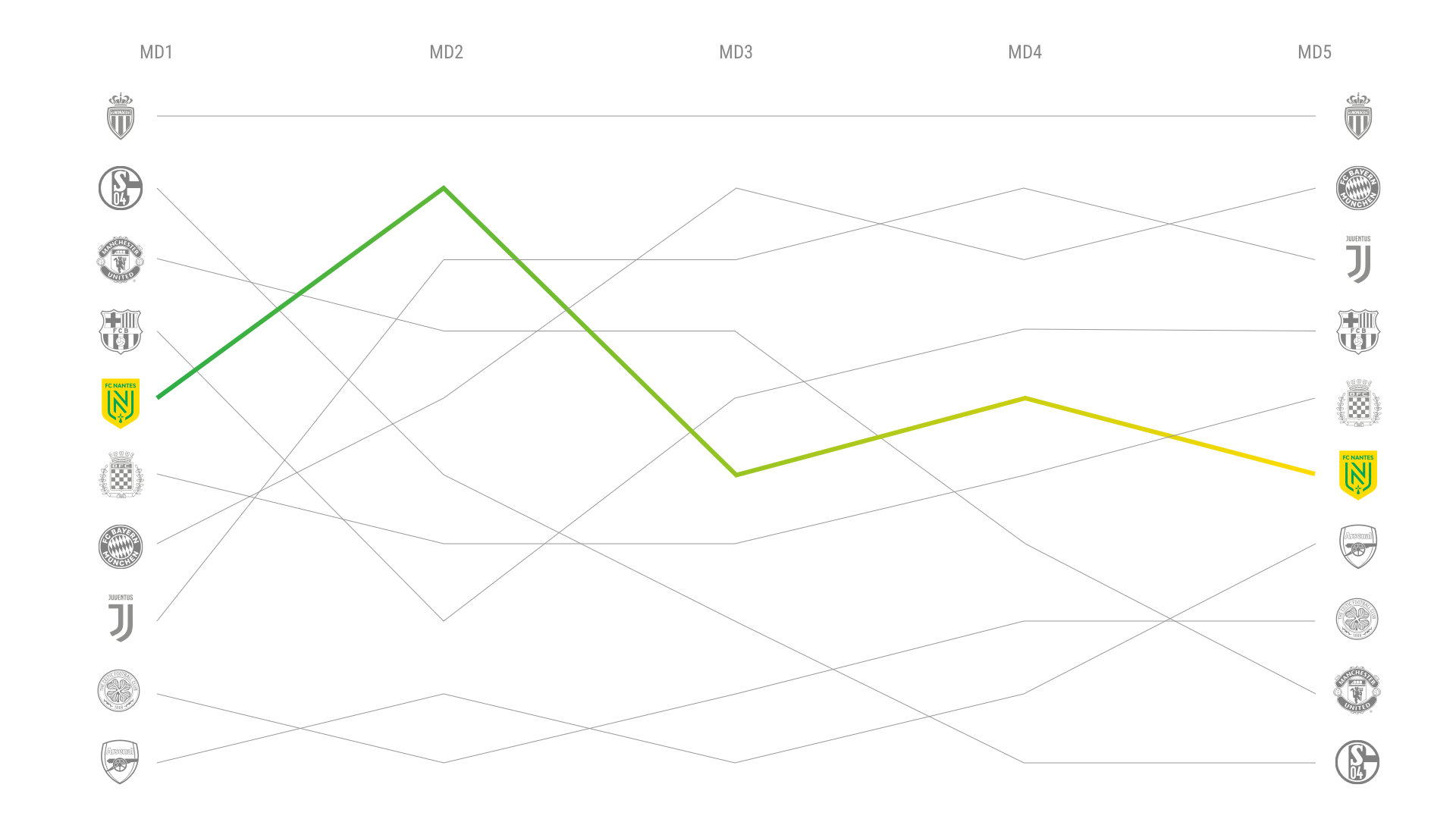 After remaining in the bottom two rankings for the majority of the first half of the Regular Season, Arsenal FC managed to breakout of that position and advance to seventh in the league following the conclusion of Matchday 5. Arsenal FC is made up of experienced PES players, including Alex Grd. He was recognized with the best goal award for his performance in the second game of Matchday 4, where the team faced, FC Nantes, who is now their closest competition as they enter the second half of the Regular Season. Seventh place puts the English team only one ranking away from qualifying for the Knockout Stage, where they would have the chance to compete for the league championship during their first season in this competition. Trailing FC Nantes by only one point, the competition is still close for the top six spots in the league. 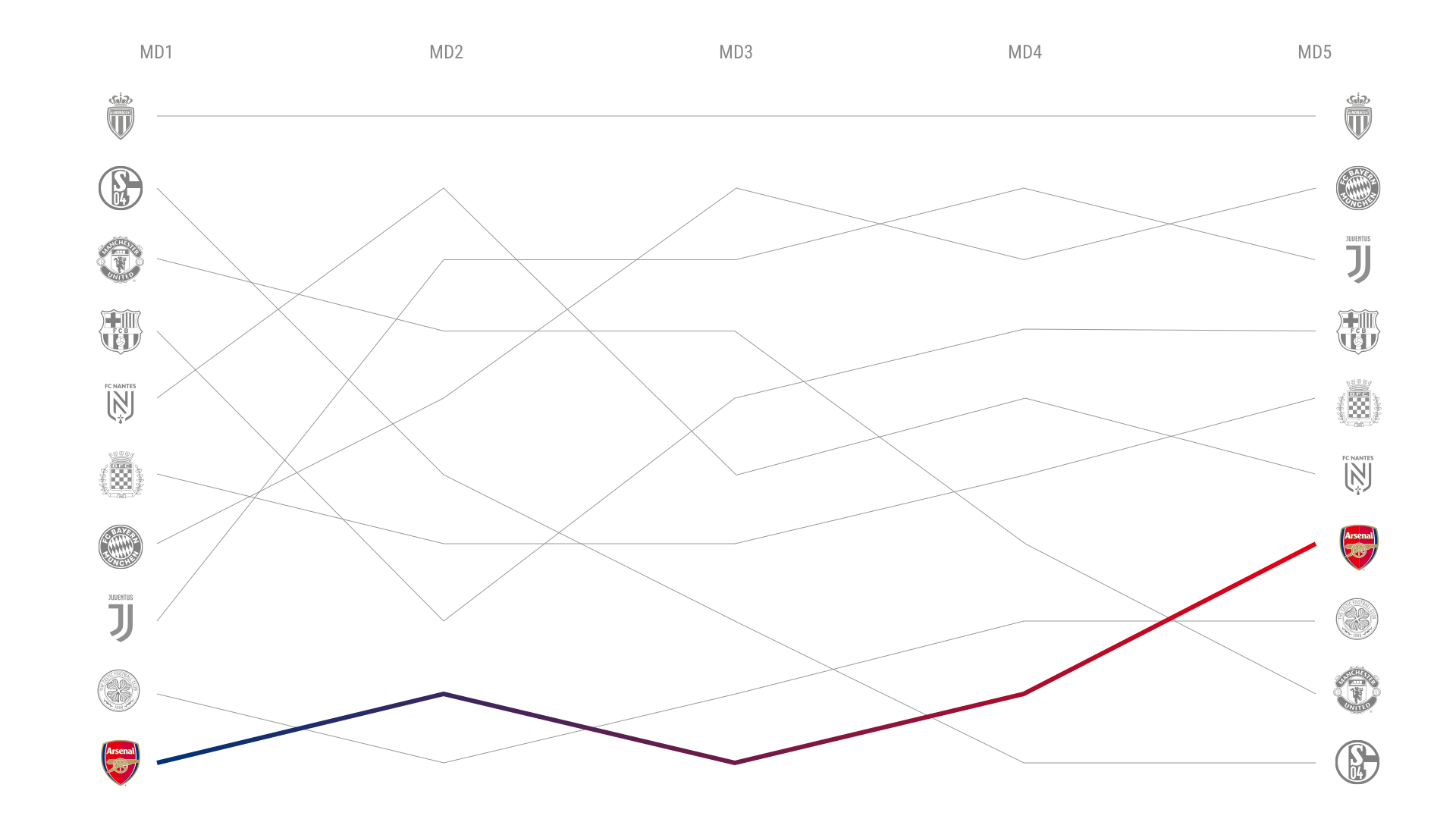 Celtic FC has begun to show improvement in their gameplay, after spending the majority of their time in the bottom two rankings at the beginning of the season. They have remained two spots away from Knockout Stage qualification, in eighth place, for the past two matchdays. Brothers INDOJAWA and INDOMINATOR have extensive experience playing PES together, but this is the first time either have been matched up with 2018 European runner-up, JORCHA.

Celtic FC landed themselves in the eFootball.Pro Finals in the 2018-2019 season, but are currently two places away from qualifying. Former teammates and current captains of their own teams, INDOMINATOR and E_c_oneill, who competed with each other for Celtic FC in the Finals last season, are now ranked closely while trying to advance their teams into a qualifying spot for the Knockout Stage. With only a two point difference between them and the currently qualified FC Nantes, taking their continued improvement into consideration, Celtic FC still has a chance to place within the top six teams in the league in order to advance. 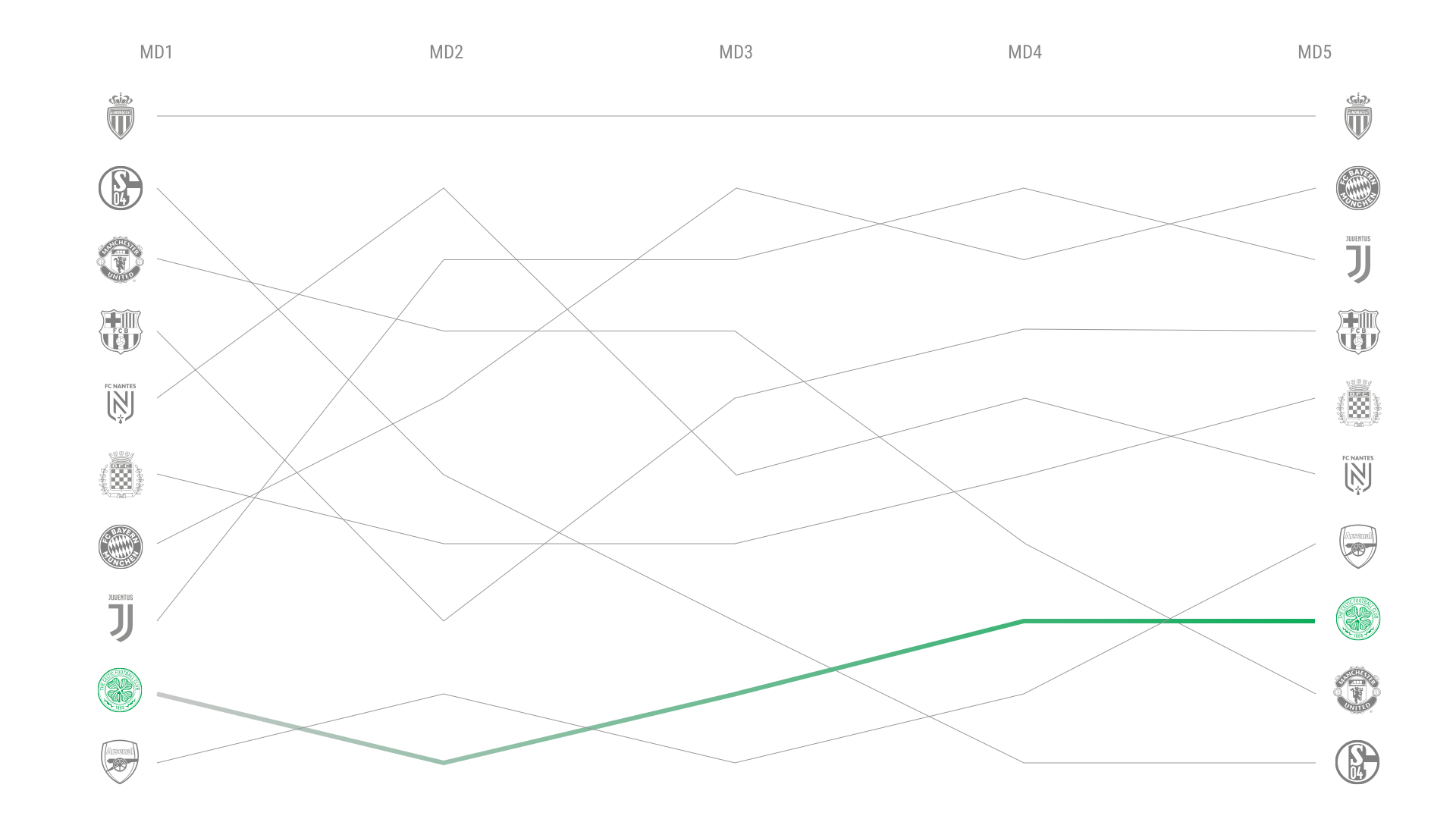 Manchester United FC started off strong, proving themselves as talented competitors in the first matchday. From this matchday, the youngest player in the eFootball.Pro league, OSTRYBUCH, was awarded the best goal after facing now second ranking FC Bayern München. His dominating performance contributed to Manchester United FC’s win in Game 1, and helped place the team in the top three rankings following the first matchday. They managed to stay within the necessary rankings to be qualified for the Knockout Stage until Matchday 4, where they were unable to gain any additional points after suffering two losses, and are now placed at ninth in the league. The team also includes 2018-2019 eFootball.Pro championship finalist, E_c_oneill, who played for Celtic FC last season. While they do currently sit in the second to last rank in the league, similar to Celtic FC they also have only a two point difference from the closest team placed to qualify for the Knockout Stage. 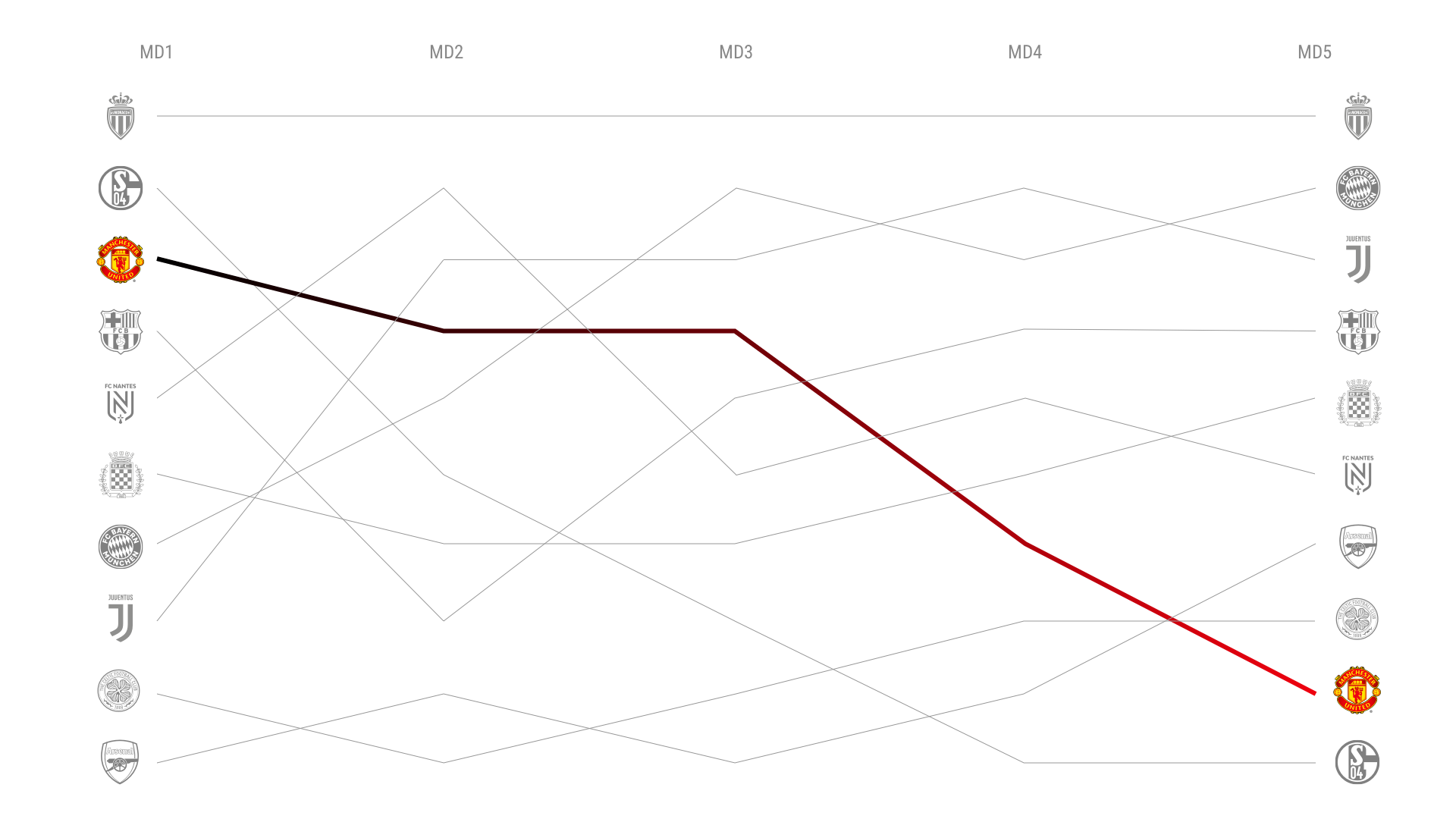 FC Schalke 04 started off the 2019-2020 eFootball.Pro season in second place following an undefeated Matchday 1, however they have dropped in the rankings consistently throughout the subsequent matchdays. Currently, with a cumulative total of eight points from the first five matches, they have the most losses in the league from the first half of the Regular Season. EL_MATADOR, champion of the 2018 eFootball.Pro Invitational, currently leads the league for the best defensive positioning. The German team proved themselves as a group of talented players capable of victory in the first matchday of the season, and currently only have a four point difference with FC Nantes, the closest team placed for qualification. 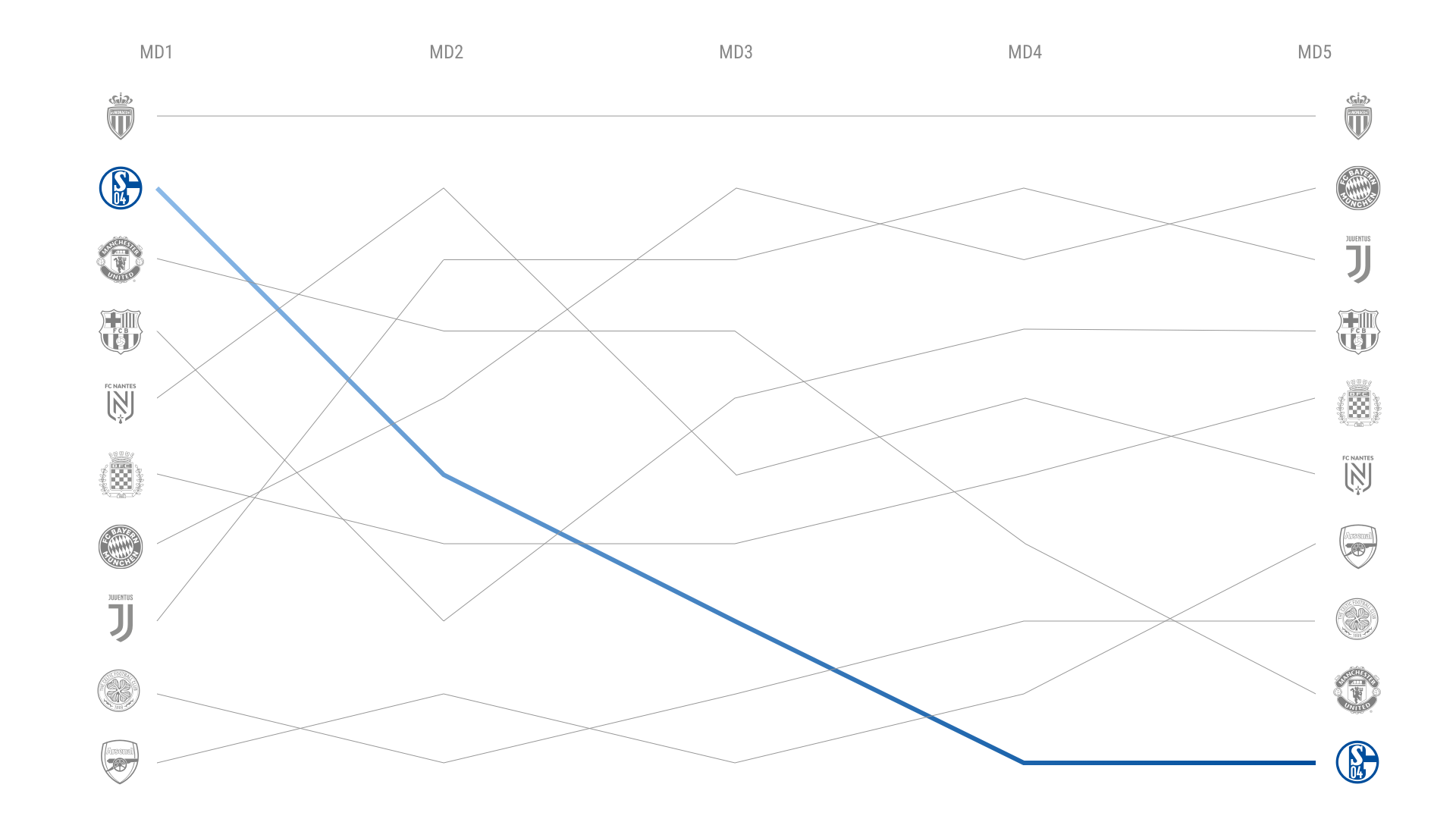