The second matchday of Group B will be streamed live at 13:00 CET next Saturday, June 18th, on the official eFootball™ YouTube channel. Sunday 19th at the same time will be the turn of Group A.

The eFootball™ Championship Pro 2022 season continues this weekend with the final two matchdays of the Group Stage. Saturday will be the day destined for Group B encounters and Sunday, for Group A. After a last weekend full of goals and fantastic match-ups, all clubs have had one week to recover from their defeats or get ready to win the decisive final points which can take them to the next round. As last matchday 1, no player will know who they will be playing against until the very start of the match, so it will be important to have a good strategy and to choose the right order in which the players will play. As these are the last matches, every point counts for advancing to the knockout stage. 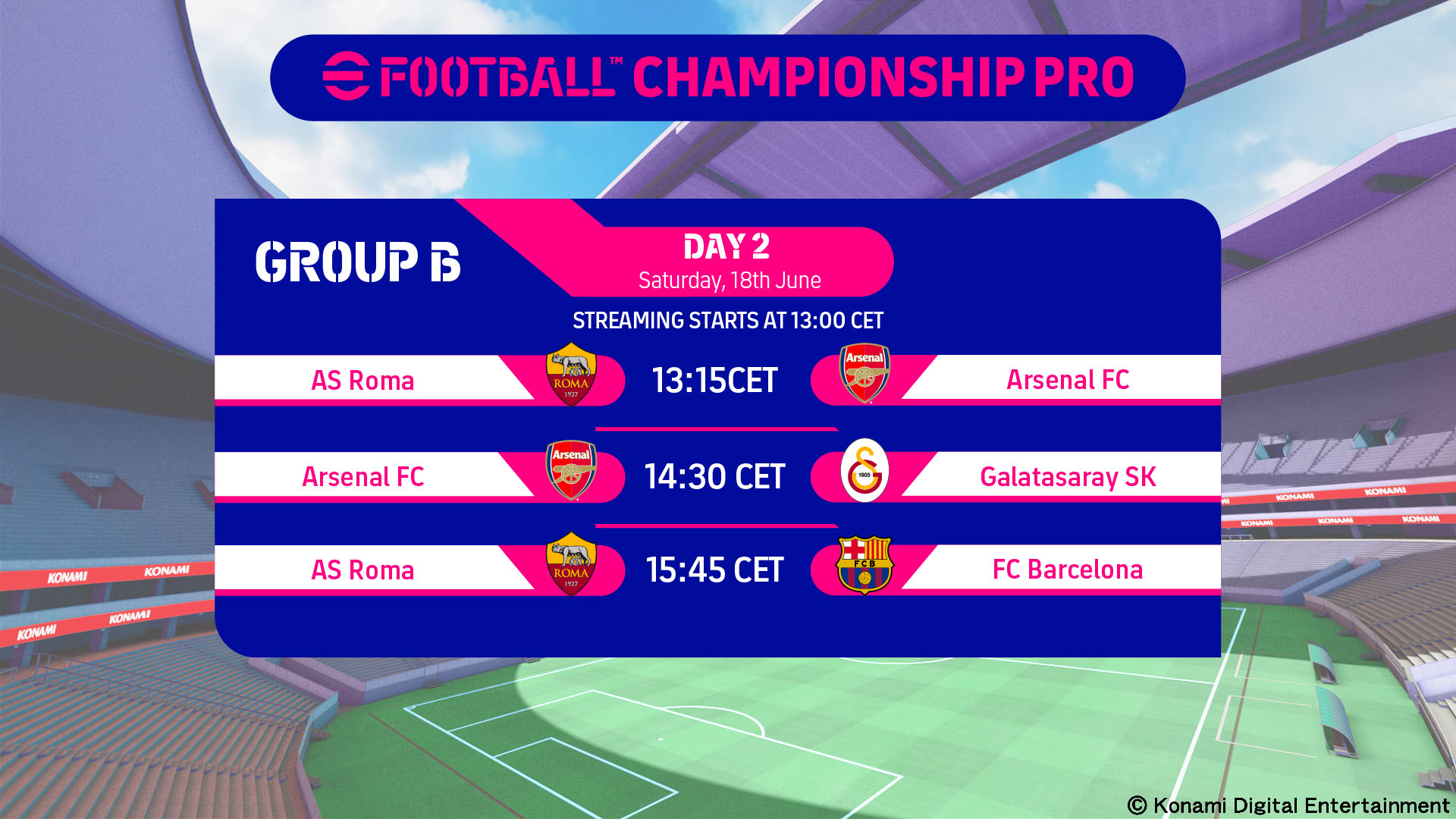 AS Roma arrive in good form after picking up six points from their two wins over Galatasaray SK in their only game last weekend. Debutant ASR_STIFFLER beat Djole in the dying seconds of the game and Giallorossi captain ASR_URMA43 defeated reigning eEuro champions Kepa_PFC 1-4. Meanwhile, Gagliardo28 lost narrowly to Turkish captain Mucahit21 but proved he is ready for a win next time out. The Romans look like a solid team that will be hard to beat.

Up against them is Arsenal FC, who also performed far from their best in their only match of the day against FC Barcelona. Only INDOMINATOR secured a win for the Gunners against the always tough opponents ROKSA. S-Venom managed a goalless draw that earned them a bonus point, while Barboza pulled an unexpected surprise by being crushed by an outstanding THE PALMA. The London side will need to bring out the potential in themselves against the always-feared AS Monaco if they want to have a place in the KO round.

Arsenal FC will be coming off the back of finishing their match against AS Roma just a few minutes earlier. Depending on the result, the Gunners may or may not still be in with a chance of qualification against Galatasaray SK, who also need to recover the points lost last matchday. Of the two games played with 18 points at stake, only six went to the Turkish Super League side thanks to captain Mucahit21, who emerged as his team's saviour by securing two victories against Roma's Gagliardo 28 and Barcelona youngster ALEXR. The Turks only have one leg, one chance, so they need the best possible performance and Kepa_PFC and Djole to join Mucahit21 on points if they want to see themselves playing next weekend.

A strong AS Roma side coming off the back of their opening match of the day against Arsenal FC will be the team to beat for a blaugrana side who currently sit at the top of the table with 10 points. Big scoring strikes from THE PALMA and ROKSA were the highlights of Sunday's fixture and also propelled them to the top of the scoring charts. Although young ALEXR's performance was lukewarm with a draw and a loss, he had chances to take at least one win, so it is to be expected that, once the Spaniard joins the scoring streak of his teammates, FC Barcelona will be a tough opponent to stop. AS Roma will not make it easy for them as if they win enough points in their first game they could find themselves virtually qualified and perhaps then the match will become a battle to see who gets first place and goes straight through to the semi-finals of the tournament. It is sure to be an exciting and very tight match. 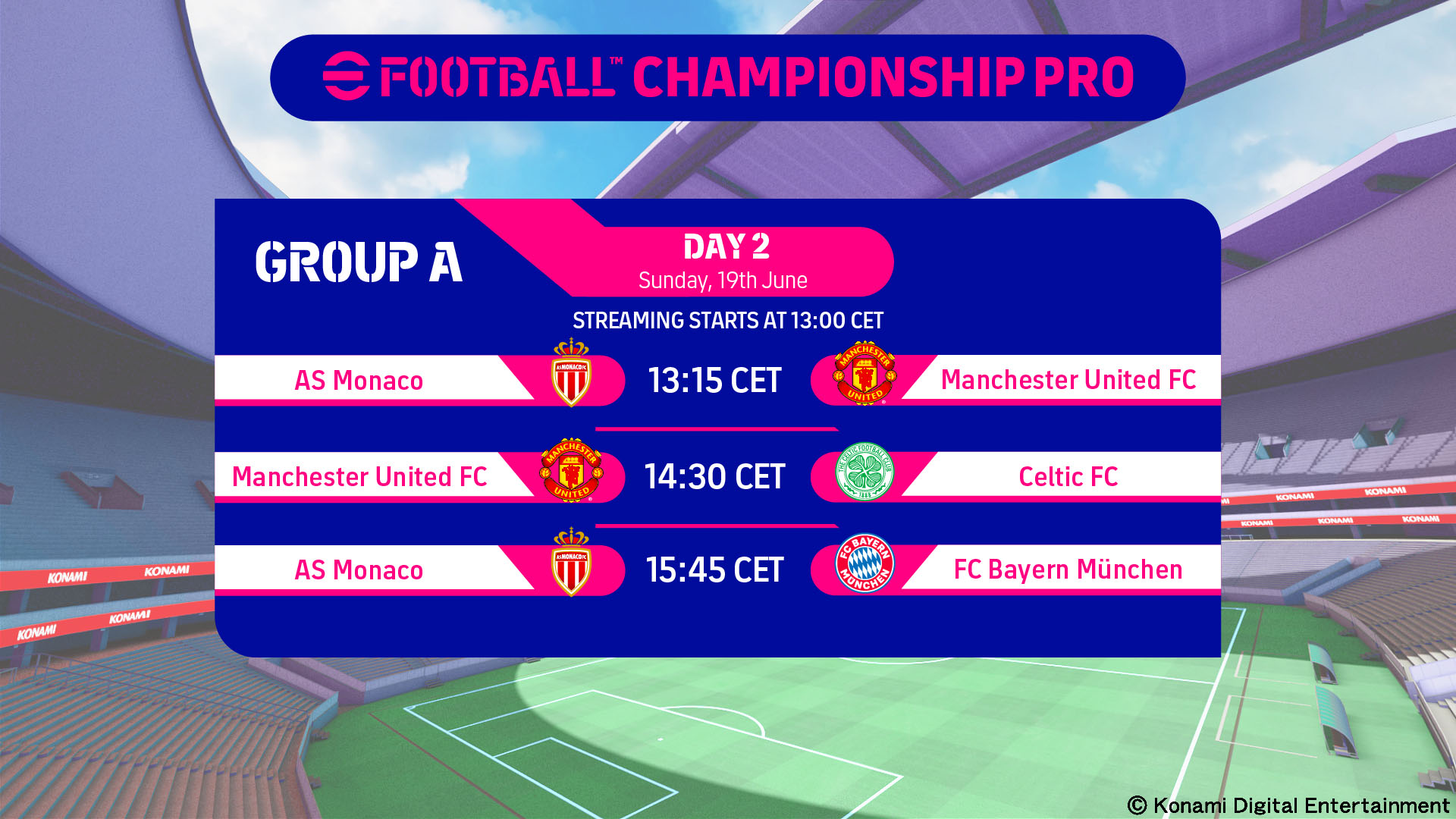 AS Monaco are coming off a bittersweet first day in which they only played one game against Celtic FC and came away with just three points thanks to French newcomer Nekza's win over an experienced Lotfi. Both Usmakabyle and GuiFera lost their respective matches against Kilzyou, the former, and Aazbabysk, the latter. Both eFootball heavyweights will need to regain their confidence and put in a better performance if they are to have any chance of qualifying for the next round.

In the opposite half of the field will be Manchester United. The English team started the competition with 4 points out of a possible 9 against a very evenly matched FC Bayern München. The first point was fought by E_C_Oneill with a 4-4 result against FCB_Mestre, while Kams10_ defeated FCB_Alguacil to secure the first victory for the Red Devils. Ostrybuch closed out the contest with a closely disputed loss to FCB_Jose. The Old Trafford side will now have to prepare for a tough battle against AS Monaco, who also need the points to remain in with a chance. The match will be decisive as it will leave the team that takes the fewest points from the fixture virtually out of the running for qualification.

It will not be an easy day for Manchester United, who will be coming off a game against AS Monaco with some big-name players and will then have to face Celtic FC, who are currently leading the group standings. The Scots got 12 points out of a possible 18 last matchday with a skilled and mature Kilzyou and a defensive portent like Aazbabysk. Bitter were the two defeats of Lotfi, who was only a shadow of what it can be and that, if it plays well, could complete a Celtic FC that seriously aspires to win the competition. The Whoops will want to secure the semifinals with the first place in the group, so it is expected to be a hard-fought match that could be a do-or-die game for Manchester United.

Monegasques and Germans will play the last match of the group stage with everything still to play for. Depending on Manchester United's results in the first two matches of the day, both teams might be already qualified, as long as Monaco had more points than the British in their previous match. But with so many points at stake, anything can happen and the Spaniards who shape the Bavarian team will want to show the best version of themselves after a bittersweet performance last Saturday from which they only got 4 points against Manchester United and 3 against Celtic FC. Last chance and last place in the quarter-finals at stake, who will qualify?

A weekend full of eFootball™ drama and great matches that are sure to delight spectators. Next Saturday, June 18th, the second matchday of the Group Stage starts at 13:00 CET with just 6 places to stay onboard. We will also know the Best Goal of the Day 1 recipients and the Best Player of each Group during the live streaming, which will be conducted by Semra Hunter alongside commentators Harry Channon and Stewart Westley “Wezza”, and broadcasted worldwide on the official eFootball™ Youtube and Facebook channels..

Remember that every fan can win 500 eFootball™ points just by entering the streaming from within the game and that clubs will give away items and merchandise for every game won by their squads. Stay tuned to their social media accounts!