The eFootball™ Championship Open 2022 is meant to serve as a platform for amateur esports players who want to become professionals next year.

After finishing 5th in last season's eFootball™ Championship Open, Frenchman Nekza caught the attention of some clubs and important players, such as AS Monaco and Usmakabyle. The Monegasques decided to recruit the 18-year-old with a tremendous potential to show and it is clear that they made no mistake. Nekza dazzled everyone by winning the eFootball™ Championship Pro 2022 as Top Scorer with 16 goals in 6 games and being voted MVP of the tournament in his debut year. He did not lose a single match, winning 5 and drawing 1, and defeating tough and experienced opponents such as Celtic's Lotfi, FC Bayern's FCB_Jose, Galatasaray's Mucahit21 and AS Roma's Gagliardo28. An incredible performance for a player who shows a great ability to score goals with few shots (16 goals from 31 shots, of which 25 were on target) and who promises to continue to break records in the coming years. 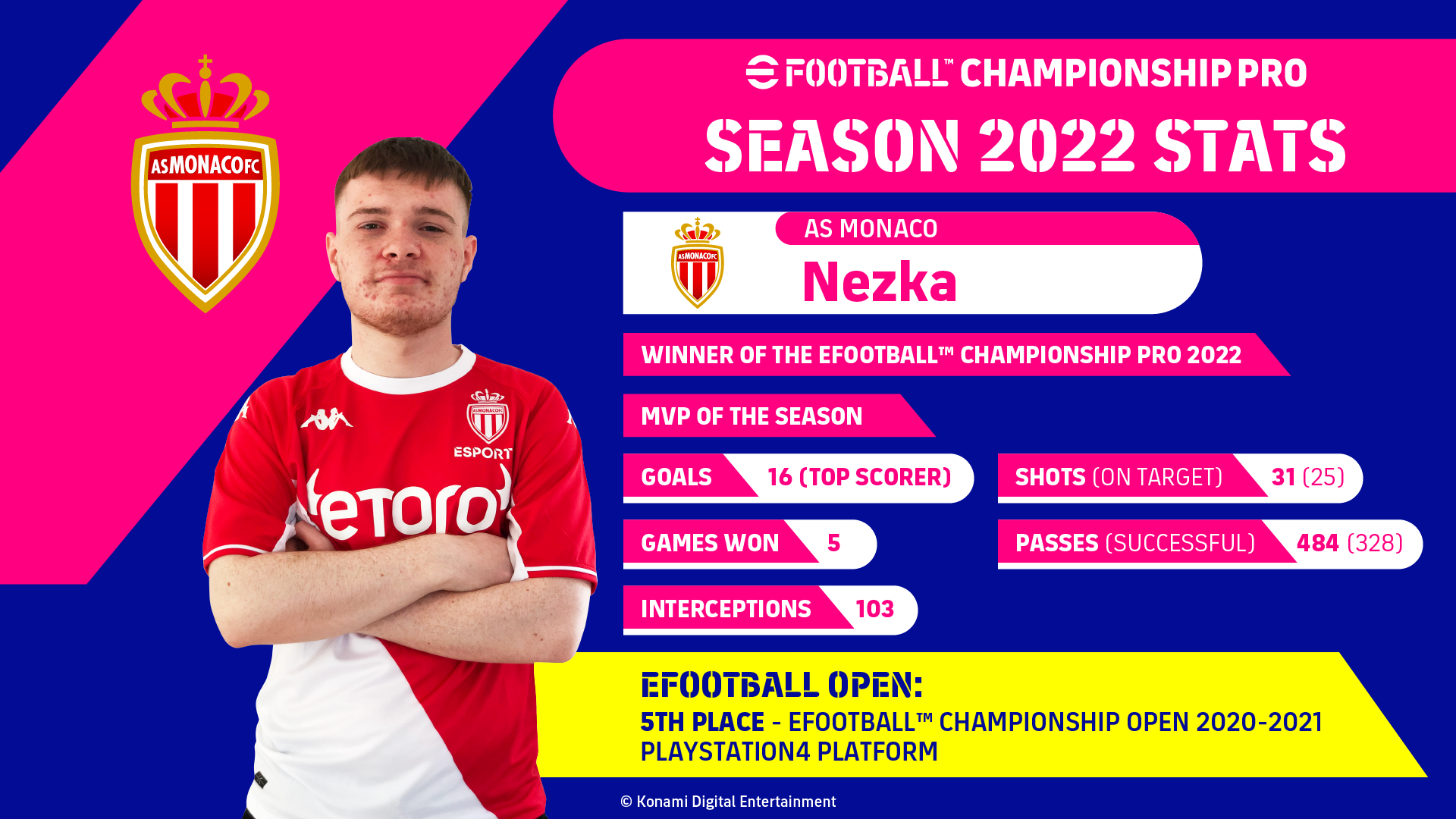 Mucahit21 stunned the league in 2020-2021 with his debut professional performance playing for his home country, Turkey, by representing Galatasaray SK in their first season of eFootball.Pro after placing in the top 4 of the 2020 World Finals playing for AS Monaco on the Xbox One platform. This season Galatasaray SK put their trust in him to lead their team by making him the captain and he has proven that he knows how to lead his team by stepping up to get points when the Turks needed them the most. In the Group Stage he won two matches that secured 6 important points for his team, which thanks to extra points from Kepa_PFC and Djole, allowed them to go through to the Quarterfinals. There they were defeated by AS Monaco by 2 games to 0, but nevertheless Mucahit21 left good numbers in the current campaign: 7 goals in 4 games having taken 16 shots of which 12 on target. It is worth keeping an eye on this player who is growing every year and is always a tough opponent to beat. 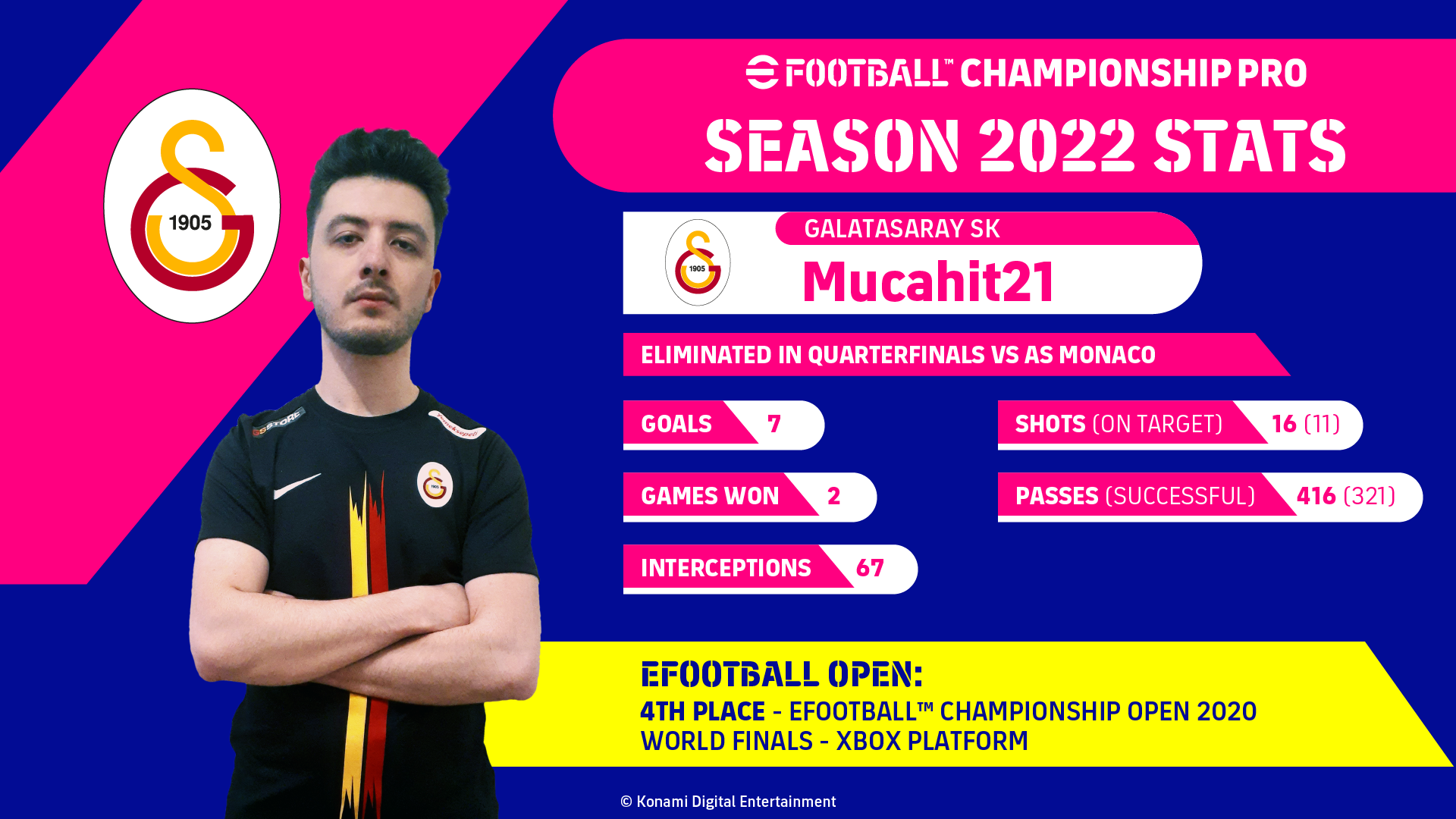 Gagliardo28 represented FC Bayern München in the eFootball.Open 2020 World Finals on the PlayStation4 platform and midway last season he joined Celtic FC in the eFootball.Pro. This year he signed for AS Roma, with which he reached an outstanding first place in their Group but finally finished in 4th position after being defeated by Celtic FC in the 3rd/4th place match. Although his performance in the eFootball™ Championship Pro 2022 may not have been the most outstanding of his team, he has left remarkable results that reveal the potential that this player has. Of the four games he has played he has won none and drawn 2, scoring 8 goals after 27 shots, 19 of which were on target. Known to be a tough opponent with a solid and defensive game, Gagliardo28 is growing progressively and who knows if he could surprise us in the years to come. 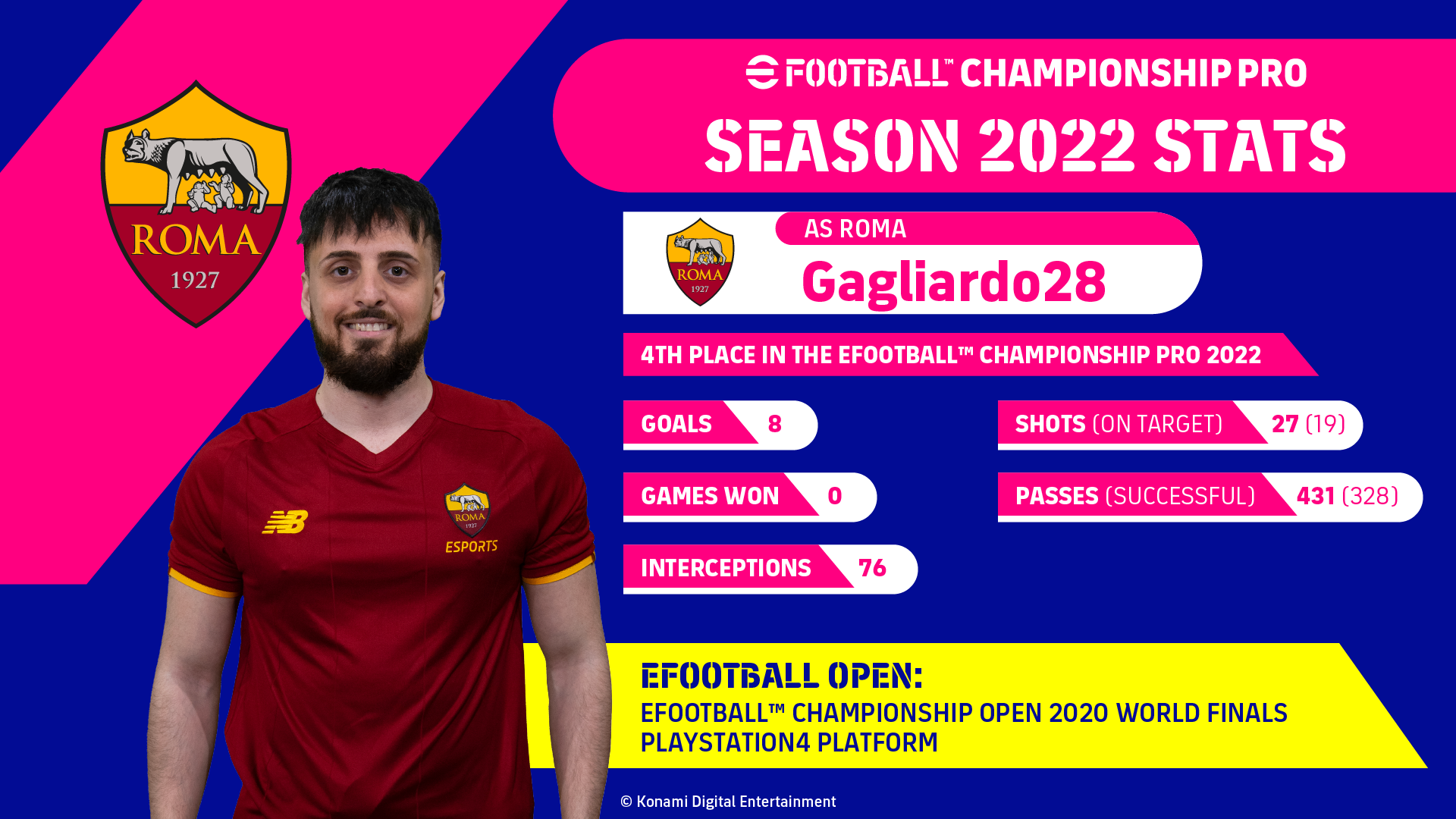